PapayaTapper said:
Something like that would be all over the mainstream media. If the only place you see something like that published is a source thats nothing but alarmist headlines its probably a BS site. Or CNN

In other words you can ignore
Click to expand...

Thanks for the tip.

If you review the CNN news articles, you will notice that they are all pro Red China and even refer to the US evidence for origins of the China virus as propaganda. CNN fully adopts Chinese propaganda. This raises two points. First, how much of CNN is owned and controlled by China? Second, I believe that CNN, as well as the rest of the leftist media, understands that if America goes back to an anti-communist ideology, they will be easily defeated. The powers behind the US media are still terrifed of the mere mention of Joe McCarthy. Lets let their nightmares come true.

Just one example of CNN coverage:

China has struck back at what it calls "24 lies" by US politicians in the most sweeping and detailed rebuke yet of accusations over its handling of the novel coronavirus outbreak.


Rep. Maxine Waters reveals that her sister, 86, died from coronavirus
at a Missouri nursing home where staffers have protested poor conditions 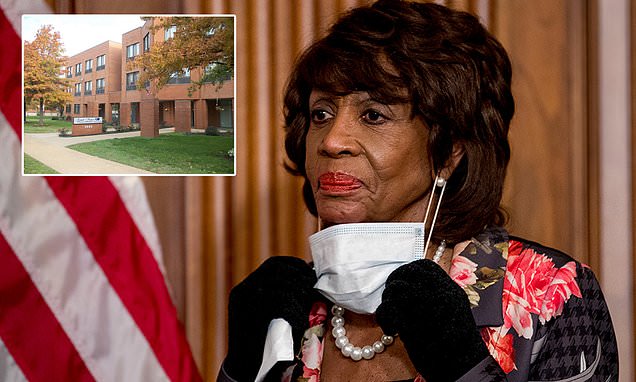 Rep Maxine Waters' sister Velma Moody, 86, died from coronavirus at Grand Manor Nursing Home in St Louis on May 1. The congresswoman shared her grief over the crushing loss in an interview.

Deepdiver said:
911 Wrote the following misinformation based upon CCP propaganda:

"China has got nothing to do with the US response to covid19."

USA now has 80,700 deaths largely due to the FACTS that the CCP insisted that the corrupt incompetent WHO tell the World and USA that there was no human to human transmission and no need to restrict air travel combine these deaths with 75000 fentanyl cut heroin and cocaine deaths in the the USA from CCP China manufactured fentanyl we will see nearly 200,000 deaths in 2020 of both the young and old from the narco war and biowar by the CCP against the USA this year alone.

Anyone making excuses for the CCPs actions based upon these FACTS is guilty to giving support, aid and comfort to the enemy.

There is a Trump haters thread for TDS posts and 911 posts like the above belong there.
Click to expand...

You'd think that one of the 17 American intelligence agencies, whose total budget is in the hundreds of billions, could have picked up on the fact that a flu virus could actually be contagious?!?

This is the geopolitical equivalent of the old lady suing McDonalds because the coffee she spilled on herself scalded her. The culture of victimhood in America seems to run deeper than just Blacks blaming slavery for their poverty. We had to put up with 4 years of Russiagate/blame Putin from pozzed leftists, and now it's boomercons going into Blame China overdrive...


The US fucked up on covid, big time, so did Canada, France, Italy and Spain, all of which destroyed their economies and are going to end up with at least as many deaths as countries that didn't shoot themselves in the foot, like Germany and Sweden.

As well, it's pretty clear now that this virus has been around for a while:

911 said:
You'd think that one of the 17 American intelligence agencies, whose total budget is in the hundreds of billions, could have picked up on the fact that a flu virus could actually be contagious?!?

This is the geopolitical equivalent of the old lady suing McDonalds because the coffee she spilled on herself scalded her. The culture of victimhood in America seems to run deeper than just Blacks blaming slavery for their poverty. We had to put up with 4 years of Russiagate/blame Putin from pozzed leftists, and now it's boomercons going into Blame China overdrive...


The US fucked up on covid, big time, so did Canada, France, Italy and Spain, all of which destroyed their economies and are going to end up with at least as many deaths as countries that didn't shoot themselves in the foot, like Germany and Sweden.

As well, it's pretty clear now that this virus has been around for a while:

Good friend of mine experienced the typical symptoms in early January while at a convention in Vegas. He swears he had it but at the time it would have made him one of the first 10 or so according to the official timeline. Not likely
I

Leonard D Neubache said:
Because wittingly or unwittingly he works for the devil.
Click to expand...

Curious if you meant Trump or the guy posting the fake headline. Also curious as to the nature of your comment if it's Trump. You'd have voted for HRC?
Also curious what rule he broke (but I'll reread them and see if I can find out)
If the guy was banned for breaking rule 5b (NOTE: Newbies under 50 posts are not allowed to participate in race or political discussions) then I'll have to stop posting in this thread to avoid the same fate.

I figured it was the link, but I see other links after his. Maybe its the link being fakenews.
Also would ask if it was rule 5b, that something internally could be done so us newbies simply cannot post in threads dedicated to political discussions.... without the ban hammer ideally

The reporter who asked Trump a nasty question was actually born in Red China. Trump rightly walked out. She is a communist Chinese spy with American citizenship. She is able to harass the president in service of her god Chairman Xi. Look at the arrogant expression on her ugly face. This is where we are at. We are infiltrated by the enemy. She should be drug by the hair and put on a slow boat back to Red China.

Wow, what a disaster quote about american needing Israel.

On the workers, he has a point that tis a legitimate issue, similar to agriculture. If you rely on a foreign workforce for an extended period you can't just switch the whole workforce. The best idea I can think of is a phase out which limits use of foreign workers and brings in locals. My buddy has a farm in Canada and he has foreign workers come up every year, if the government denied him his workers, he was considering just shutting down for a year. There is a lot of risk and cost in hiring incompetent people who are accustomed to high standards of living. Until the government hits hard times mode and stops paying the UBI there is no incentive. They should also be looking at tariffs on goods from foreign countries (china , india) as much as anything.

The goal is to have a more closed economy. America has the best closed economy in the world. Canada is totally dependant on Exports and Imports, and its a real issue.

Gold Member
While I'm sure Meme Veterans and Keyboard Warriors appreciate the shout-out, there is an issue standing in our way: big tech censorship.

No one's talking about Trump explicitly saying he wants mass vaccination carried out by the military by the end of the year?

Gold Member
I always think of Trump as a rambling grandpa who says provocative things. I usually wait a few days to see what they really mean.
E


Bloomberg - Are you a robot?

Google Antitrust Suit Being Drafted by Justice Department
By David McLaughlin
May 15, 2020, 10:28 PM EDT
Updated on May 16, 2020, 9:57 AM EDT
DOJ has been investigating Google over ad market since 2019
Complaint signals investigators are preparing for litigation
The U.S. Justice Department is drafting a lawsuit against Alphabet Inc.’s Google, accusing the internet giant of violating antitrust laws, according to a person familiar with the matter.

The Justice Department has been investigating Google for nearly a year over whether the company is thwarting competition in the digital advertising market, where it holds a dominant position.

A draft complaint doesn’t necessarily mean the government will ultimately sue Google, but it signals investigators working on the case believe there is enough evidence to start preparing for litigation, said the person, who declined to be identified because the probe is confidential.

A spokesman for the Justice Department declined to comment.

A lawsuit against Google would mark the most significant action against the company by U.S. enforcers. In the EU, Google has been fined billions of dollars for abusing its dominance and harming competition. But U.S. antitrust officials have been hands-off since the Federal Trade Commission, which shares antitrust jurisdiction with the Justice Department, closed an investigation in 2013.

All that changed in 2017 when the Trump administration took power wanting to take a hard look at Google, Bloomberg has reported. By then, Google and its fellow tech giants were facing a much less welcoming environment in Washington, where Democrats and Republicans raised concerns over massive collection of user data, failures to police content on their platforms, and claims they are monopolizing markets. The Justice Department opened the Google probe last summer.

State attorneys general are also investigating the company. The Wall Street Journal reported earlier that Google will likely be sued by the states and the Justice Department.

Texas Attorney General Ken Paxton, who is leading the coalition of 51 attorneys general, said Thursday, that states are on a “good path” to completing the investigation soon.

Google said in a statement that it’s engaging “with the ongoing investigations led by the Department of Justice and Attorney General Paxton” and it’s focused on “providing services that help consumers, support thousands of businesses, and enable increased choice and competition.”

Although Paxton’s investigation focuses on digital ads, some states within the investigation have also pursued other areas, such as search and mobile software, Bloomberg has reported.

States would likely band together on a single complaint, although some of the attorneys general might drop off before a lawsuit is filed, said a person familiar with the matter.

Trump said the companies are controlled by “the Radical Left” and that his administration “is working to remedy this illegal situation,” without offering specifics.

— With assistance by Ben Brody, and Daniel Stoller
Click to expand...

the high said:
No one's talking about Trump explicitly saying he wants mass vaccination carried out by the military by the end of the year?

Of course not, at this point Trump supporters have their heads too far buried in the sand so they think hes a buffoon that can do no wrong and they still expect him to deliver results. Hes just another evil elite like the rest of them.

Very blue pilled sunk cost fallacy logic I see from most of my Trump supporting friends at this point. If he was a girl they would have dropped him long ago. You'll see it when the same anti-vaccine people chime in against me in support of trump despite what he says.