Gold Member
Lol youtube is censoring and removing Tucker Carlson videos for violating their hate speech rules.
Facts are racist! Lololol he really needs to hurry up and make his own platform to get his message out
Last edited: July 29, 2020

Wow. The maladjusted hysterical white women and the desperate boys who work for them in Silicon Valley are really putting in some overtime lately.

Redcrosse said:
Hmm, I have to think about this a little. I’m not sure I entirely agree with this. While it’s true “heritage America would not be facing demographic annihilation” if the elites didn’t want it, that’s still downstream from culture insofar as the culture itself pushes the idea that multiculturalism is the highest good. Conspiracies do exist, but not everything is a conspiracy.

For example, no one forced Ayn Rand to develop and promote and propagandize for her philosophy of Objectivism. That was something she believed in and she wrote all her novels and got them published and they became bestsellers. And many people believed that this was the answer, this is the truth of things, and some of those people became people with real power, like Alan Greenspan. It happened organically, that people like Greenspan who believed Ayn Rand was in possession of the truth conducted their professional lives accordingly. So we have to recognize that Rand, an enormous bestseller, has had real impact on our world - much of it negative (she had great contempt for “ordinary” people, for the very idea of community, and expressed contempt for religion, Christianity in particular). There were positives too, and admirers Ron and Rand Paul are far less contemptible than most politicians - but her impact on society was real, and it emerged organically. She did change, to a considerable extent, the contours of conservative thought and politics.

Likewise, many conservative authors like David Horowitz and Roger Kimball, and even many old school leftists, have bemoaned the Long March through the universities of radical leftists, starting mostly in the sixties, accelerating in the seventies and eighties, and now totally dominant. This was a conscious strategy sixties radicals employed to take power. And it worked. They’ve long controlled the humanities and have tremendous power even in STEM. Many former leftists like Horowitz or Mallory Millett (sister of radical feminist zealot Kate Millett, whose books are the Bible of second wave feminism) have discussed how this was a conscious tactic and plan eagerly discussed in radical circles back in the day.

These people took over academia, used it to proselytize and propagandize, sent out millions of brainwashed students into the world and from there they flooded Hollywood and the media. Harry Warner of Warner Brothers had the motto: “We make movies - let Western Union deliver the messages.” i.e. audiences want to be entertained, not receive some political lecture. But that attitude is gone because of the type of people who now run the studios. But it wasn’t all planned and designed by our elites. Elites were involved, but it wasn’t all top down planning.

Politics IS downstream from culture insofar as culture is what people absorb and internalize. When Ayn Rand did become enormously popular in conservative circles, she did influence and alter the texture, the fabric, the weft and weave of the political landscape, at least in America. Likewise, when the sixties radical leftists took the campuses, they displaced old school liberals like Lionel Trilling. These people were very left leaning in their politics, but they still felt a commitment to teach and respect the traditional classics and ground students in The Great Tradition. But with the radicals in charge, the face of mainstream Leftism has changed. Now they don’t dream of teaching Plato or Tolstoy, their goal is to shove Franz Fanon, Che Guevara, and Kate Millett into the canon - or even worse lunatics. One of the BLM founders talked about how she experienced an awakening after studying Lenin and Mao.

People’s minds are shaped by the culture and literature they ingest during their formative years. And when you have influential people on the right shaped by Rand and Friedman, and on the left shaped by Millett and Mao, that’s a recipe for disaster. And it’s too simple to just suggest that’s all a consequence of elite plotting and masterminding. To an extent at least, it’s an organic process. Just not in a good way.
Click to expand...

At best your post infers Power>culture>politics but I still think you're wrong. Conservatives have been anti-immigration for a hundred years and it has never stopped once. Not for even one year under any administration, Left or Right.

The elites make a show of trying to present the idea of grassroots support altering politics but it's just for show. Every piece of legislation that came out of DC for the last 100 years was put in front of them by the elites, and whatever cultural support it appeared to have was purely a PR con job.

And you'll know what I'm saying is true because you're going to get more of the same. You've had four years of Trump stifled by a handful of oligarchs pumping out propaganda 24/7. Oh look, while everyone was distracted they slid in through the back door and legislated themselves trillions of dollars while mom and pop on Main Street went bust. Now you're heading into a culture of total corporate oligarchy where you talk about Apple and Starbucks and Google like they're lesser gods.

Or more accurately, Politics is merely the circuit through which Power enforces its will on Culture.

Gold Member
Cernovich has a copy of Jim Jordan's confidential memo ahead of today's hearing with talking points for the GOP regarding the use of antitrust laws against big tech. It's a huge sellout where Jim pretends to be acting tough for our interests but nothing will actually happen. The monopolies will be protected. *Jim Jordan* of all people betraying us. Commies on the left, traitors on the 'right'.

I obtained the GOP’s confidential antitrust memo for tomorrow’s hearing. It’s a direct betrayal of conservatives. 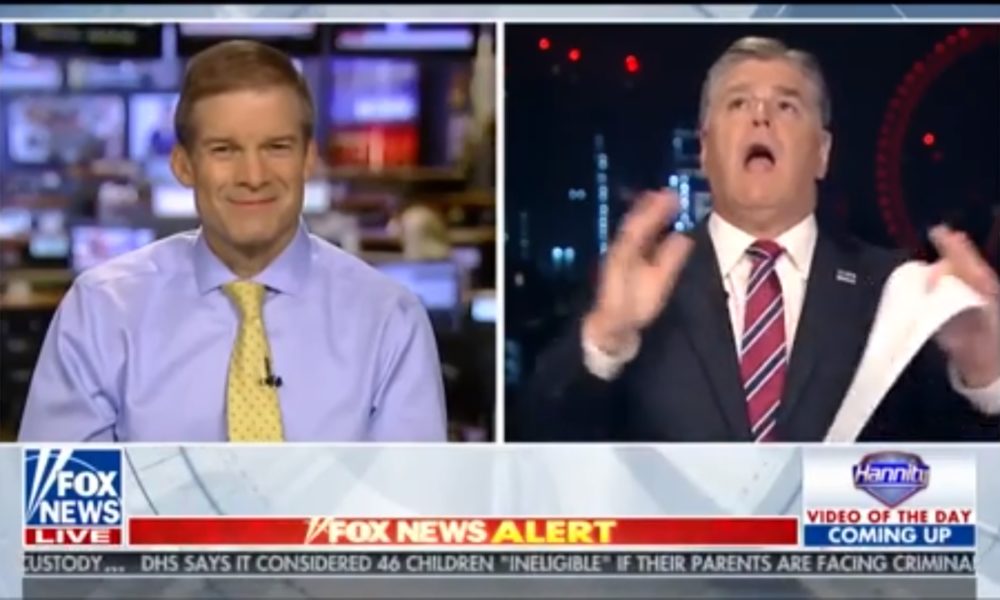 Andrew Torba ✝️ on Gab: 'I hate to clue you in, but the Big Tech hearings …'

Andrew Torba ✝️ on Gab: 'I hate to clue you in, but the Big Tech hearings in Congress are a waste of time. All of Congress is owned by Big Tech. All of it. Both left and right. It's all a dog and pony show. Ted Cruz will get like 3 jabs in about censorship, people will celebrate as if...

It looks, at first glance, like Jordan's saying that the companies are already being investigated by other agencies, and that another investigation would be redundant and pointless. Am I missing something?

At best the GOP seems soft on this.

At worst they're complete and utter sellouts.

I tend to lean towards believing the latter as censorship against conservatives has snowballed, to the point Trump and his son get censored on twitter yet the GOP has done nothing. The sitting POTUS literally doesn't have freedom of speech on social media while Antifa does. Wide ranging bans and censorship of conservatives across twitter, Facebook and youtube. Google and repeatedly changed its algorithms so conservative sites don't return in search results.

And the past few years was the time to confront this head on as if Biden wins it's pretty much over for conservative voices. That will brainwash many more young, impressionable minds.

rainy said:
And the past few years was the time to confront this head on as if Biden wins it's pretty much over for conservative voices. That will brainwash many more young, impressionable minds.
Click to expand...

I was reading a book about monks in the Soviet Union and it mentioned how even Soviet dissidents were still communists. There weren't really libertarians or conservatives to speak of. You had syndicalists, Marxism purists, and Trotskyites against the Soviet establishment.

I really hope this doesn't happen here where you have young people arguing over whether there are 27 genders or infinite.

Gold Member
Trump needs neither Congressional nor Senate hearings with Silicon Valley companies to smash them to bits. There are already existing anti-trust and anti-terrorism laws on the books that could be applied at a moment's notice without any new input from Congress or Senate. These hearings are just a clown show to cover up the fact that nothing is happening, even though it could and should be.

Most people don't know this.
R

Trump is trying to woo the suburbs:

RaccoonFace said:
Trump is trying to woo the suburbs:

rainy said:
Trump and his son get censored on twitter yet the GOP has done nothing
Click to expand...

The bulk of the GOP has never embraced Trump and his supporters. They thought those people were banished forever with the exile of Pat Buchanan.

They mostly wish for return to the days of Rubio and Jeb, defended in the approved media by staunch conservatives such as George Will, Jonah Goldberg, and Bill Kristol.

RaccoonFace said:
Trump is trying to woo the suburbs:

Its actually a big deal. The problem is the average American didnt even know it existed much less how harmful it (AFFH) would be in the long term.

If the GOP actually learned to weaponize fear through facts half as well as the Left weaponizes weakness through feelings the debate of ideas would be a whole lot easier
Last edited: July 29, 2020

US will pull nearly 12,000 troops out of Germany
The United States will cut its military presence in Germany by 11,900 troops, redeploying some to other nations and bringing 6,400 back home, Defense Secretary Mark Esper confirmed on Wednesday.
Photo via @Reuters
Click to expand...

long term...I actually don't know which is better to mobilize the grassroots.

Biden winning could start secession talk. that SHOULD happen although right now the position that I advocate, in real life actually, is that these left wing areas should be allowed to secede and have their chance at building a patriarchy free society. Under Biden it would instead be red states trying to do that.

If trump wins the left is going to go so insanely violent that these tensions could very well spill over. the main advantage to trump is that he seems less willing to actively deploy federal troops against his base. that's not good enough because he leaves people out to dry but it's better than the way Reform/Soros-clique aligned pols like Obama have behaved.
R

Cue up the fake news going back to complaining about Trump's "dog whistles" in his tweets.

The President Just Went Beyond a Dogwhistle With His Suburbs Doomsday Talk
You must log in or register to reply here.
Share:
Twitter Email Link
Top