Wishing the President a safe and full recovery. His weight isn't ideal by any stretch, and just taking melatonin by itself would have me hurting for a soft bed, but DJT has the will and fortitude of a man half his age. Let him be surrounded by the best of care and far from the reach of his enemies.
E

Agnostic
Gold Member
The next 7 to 10 days will be telling. Hopefully Trump pulls through. At his age and weight, he is at much higher risk than the average person with the China virus
D 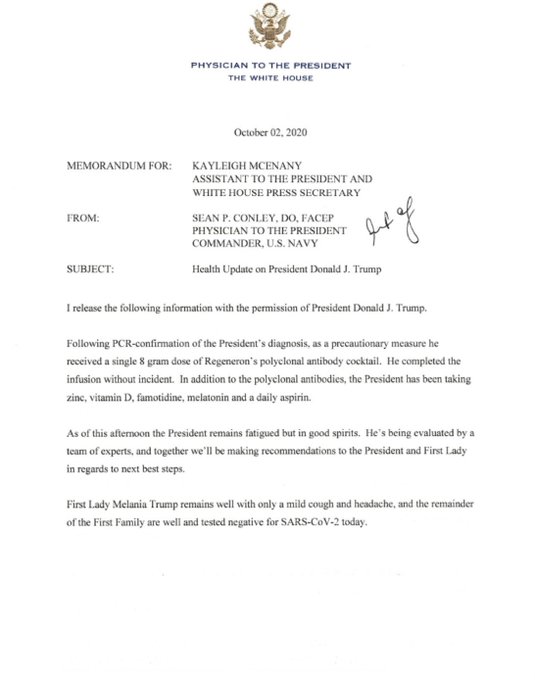 Zinc to the rescue! The "zinc has made me a better man" thread has just gained new credibility. I wonder what the melatonin is for? So he can relax?

Dr. Howard said:
Zinc to the rescue! The "zinc has made me a better man" thread has just gained new credibility. I wonder what the melatonin is for? So he can relax?
Click to expand...

To help maintain a regular and uninterrupted sleep cycle, I'm guessing. Trump is notorious for frequently sleeping less than the full eight hours that are usually recommended (IMO, because he's a man addicted to the rush of life). But good quality sleep is arguably the most potent natural defense our bodies have against illness, so it's all the more important for recovery.
E

Dr. Howard said:
Zinc to the rescue! The "zinc has made me a better man" thread has just gained new credibility. I wonder what the melatonin is for? So he can relax?
Click to expand...

This article summarizes the likely benefits of melatonin in the attenuation of COVID-19 based on its putative pathogenesis. The recent outbreak of COVID-19 has become a pandemic with tens of thousands of infected patients. Based on clinical features, pathology, the pathogenesis of acute...

1. Cover for an assassination.

2. Stunt used by Trump to downplay the virus and justify reopening.

3. The crazy one: something Q anon related. Congress just voted to condemn the q anon theory (seriously?). Trump is using the military to “distribute the vaccine” and bringing them home. Now Trump goes to a military hospital not just for a visit, but will work from there for a while. I never subscribed to Q but...
S

eradicator said:
Oh man there are all sorts of bad scenarios, trump gets sick, dies and Biden steps down and we are left with the deepenst of deep state presidents

People are going crazy with conspiracy theories everywhere. Lots of lefties think its a hoax.

Trump has covid, Bolsanaro and Boris had it as well. Difficult to avoid when you're someone who sees a lot of people like Trump does and this disease is an elite disease, it hits the hypersocial and the extrovert, those who talk a lot indoors.

Boris got rather ill, Bolsanaro didn't. It's good they caught it early with Trump yes? Antibody therapy and blood transfusions are the best bet it seems.

In any case, he'll not be feeling well for the next 10 days, as we all know what the flu is like.

I wish the president well and a speedy recovery, the whole free world is counting on you.

Gold Member
Considering we are going into the fall winter flu season I scheduled my first post Covid on site Boston VA visit for primary care checkup A1C etc blood tests and flu and multi pneumonia shots... The VA under Trump has flushed most of the hate America SJWs either retired or fired and is one of the best automated health networks in the world. So when they roll out a multi corona virus vaccine and inject the first 1 Million Veterans and only a few croak off I will get that vaccine as well.

Good news is Trump just had a China Plague wake up call and it is clear the White House became cavalier about plague mitigation methods and contact tracing.

They are not even sure who gave it to them... Likely at one of the rallies or WH functions.... So this drives home how serious this is, the need for plague management and a vaccine solution. Also the need to take care of Americans health versus the 100 Million illegal immigrants the Biden Obama Harris Bernie AOC Globalists want to flood into the Country.

Hopefully Trump will be pissed enough to finally hold the Chinese Communist Party's feet to the fire and make these Commie psychos pay who intentionally spread this bioweapon across the world.
Last edited: October 3, 2020

Seems to be quite a bit of key GOP senior level people are suddenly COVID positive. All occurring right after the debates where numerous GOP folks would possibly be in close contact with their enemy; none of which are COVID positive. I'm not buying this was a coincidence after COVID being a thing for nearly 8-9 months and no sudden mass infections occurring among GOP ranks.

Crippling the GOP senior level folks with COVID a month out from the election and now with a SC appointment on the line is exactly the type of evil shit I would expect from the democrats and/or Deep State at this point.

Kellyanne Conway is positive and her husband is a hardcore Never Trumper (look into the anti-Trump Lincoln Project; of which Mr. Conway is a founder of). That's one possible vector right there for sure. Maybe Hope Hicks' boyfriend or a random FB? Maybe multiple vectors to reduce traceability? Something is super fishy here; even Tucker implied it heavily on his show Friday. Jared and Ivanka somehow are not COVID positive despite being in-house advisors who are family and would have greater privileges with regards to proximity to Trump.

Furthermore, Trump is being given remdesivir which is overpriced garbage for treating COVID and has a 1/3rd chance of causing adverse side effects. Ivermectin and HCQ (along with other stuff like Vit C+D, Zinc, etc - ) are far more effective proven treatment protocols that are cheaper and come along with way less side effects. Start watching at the 28:00 time period to see the data comparison backing that up. The whole video is pretty solid for those interested by the way.

In addition, the guy in the video shows how NIH guidelines for COVID (which support remdesivir) are being set by tons of people who have direct financial interests with Gilead Sciences, the maker of remdesivir. NIH is right across from Walter Reed where Trump is being treated. If Trump is "cured" with remdesivir, guess what is gonna get top coverage suddenly as the miracle that saved Trump and pushed onto everyone else? Vaccine support is not that high (especially among the GOP base) but if Trump approves of a treatment with direct usage, suddenly a super expensive drug with significant side effects becomes holy water among the GOP base.

It's a win-win for evil. Think about it:

1. Take the GOP/Trump out of play for a few weeks, delay a SC appointment, and reduce his ability campaign; thereby making is easier to swing a fraud election.

2. If COVID kills Trump, it's a big win for people who want to profit/gain power on open borders, selling out to China, and just generally want to see Trump gone (most people at NIH, democrats, pushing remdesivir)

3. If COVID doesn't kill Trump but the treatment (remdesivir) cripples him, he either has to a) hide it and suffer; affecting his performance and potential electability or b) say he is fine and give approval to remdesivir; thereby making some folks a ton of money and crippling Trump supporters with toxic medication.

Despite the wild debate this past week, Trump actually got a boost in the polls post-debate and the GOP said they were going to push the SC appointment prior to the election. Project Veritas just exposed, with smoking gun evidence. massive voter fraud in the battleground state of Minnesota.

Did someone decide something drastic needed to be done ASAP to blunt Trump's and the GOPs momentum?

I think when the dust settles, this is could end very badly.
Last edited: October 3, 2020

Gold Member
Odd that only republicans are getting it.

Orthodox
Gold Member
Fake News doing what they do best.

Orthodox
Gold Member
Meanwhile...my goodness...look at all of the White Supremacists who are violently rioting, burning down and looting the city. I am scared to live in this country. *...crying...*

budoslavic said:
Meanwhile...my goodness...look at all of the White Supremacists who are violently rioting, burning down and looting the city. I am scared to live in this country. *...crying...*

Wait, did anyone in congress vote to condemn BLM or Antifa? I'd be pleasantly surprised. I hadn't imagined their admittedly ingenious branding would be enough to keep anyone in the GOP from risking the "racist" or "Nazi" labels.

Gold Member
This is an interesting tool on NBC website.

See how changes in voter turnout and support could shift the outcome of the 2020 election.

It takes 2016 election results by demographic group including their turnout, and brings those results to 2020, which has T losing to B because there’s less whites. But the tool allows you to see what happens in you change results for demographic group.

If Trump got the same share of votes by demographic group, and turnout was the same as 2016, Florida, Wisconsin, Michigan, and Pennsylvania would flip to Biden. A bit simplistic, but useful starting point.

All else being equal, if T could get 71% of the white non-college demographic, instead of 69%, not much of a difference, the win would flip back to him. Or, if he got 69% of this demographic, but increased turn out from 55% to 61%, he’d flip it back.

Of course, not all is equal, and this is simplistic, but useful exercise nonetheless.

Supposedly a lot of Latinx are flipping because they don’t like bleqs, and the Cubans and Venezuelans in Florida don’t like commies.

But there is a white pill in there to counter the black pillers. If the left does win and starts treating whites rough, there’s a lot of whites that can be flipped still. A lot of room to go.
Last edited: October 3, 2020

Protestant
Gold Member
The White House is under attack from satan and at the moment it all revolves around the nomination of Amy Coney Barrett. The evil one must stop a Christian, Conservative, pro life woman from joining the Supreme Court. America was born in covenant relation with God and that is codified in our founding documents. Any adherence to such documents is a threat to evil and is why the left hates originalists like ACB. Originalists adhere to the text. That's why we write things down.

Gold Member
I’m not that worried but we’ll see what happens. Remember, statistically the survivability is about 95% for his age bracket.