A real litmus test for me would be to throw out speculation on nominating _____________ for a high-level state position - if Neocons immediately try to take him/her down, immediately get them business cards and a desk plaque. 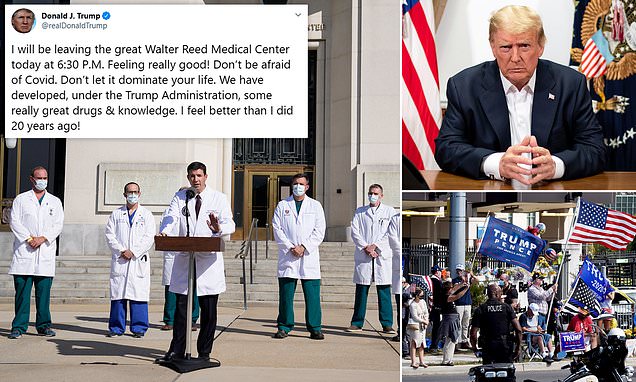 Trump says he will leave hospital at 6.30pm tonight and tells his followers not to be afraid of COVID or 'let it dominate' their lives
Click to expand...

Wish the Bee was real because that would signal to the libtards that their Trump Derangement Syndrome would now need to hit Stage 3!

People admire strength, and people glorify superheroes. Trump, as a human, is literally a walking and breathing caricature of the American Experience. How can a man who professes to live on a diet Diet Coke and chicken, tans too much, works 80-hour work weeks into his 70s, have maybe one rough day after getting his with some virus that literally is supposed to destroy humankind. Trump brushing off Covid-19 will end up being the same approach the USA takes on regarding the virus.

The Hoax is unravelling baby!

It is an open secret now that Democrats are Wall Streets' friend. Wall Street pushed for Kamala Harris as their safe pick and bullied her onto the ticket even after she flopped in the leadership primaries.
D

Of course they are. Americans voting for Biden have truly lost their way. Even if they are at the top of the financial pyramid, do they stop and give thanks for the system that gave them the opportunity? No, many are of the typical 'Get mine, f everyone else' mentality. Sick really.

They are also voting for outsourcing and having the US be beholden to China.

What legacy would they leave their kids? An America worse off where their kids have to struggle.

All because they are brainwashed that 'orange man bad'

The morning after the world learned President Donald Trump contracted the coronavirus, a Seattle-area teacher went on a rant about the president to sixth graders. When a mom complained, he misled her about what happened. Luckily, the mom recorded the incident on her cell phone.

Brendan Stanton, a middle school teacher at P.G. Keithley Middle School in Tacoma, asked students who they admired and why. One student answered President Trump. That triggered Stanton.

Not only did the teacher boot the student from the chat, he proceeded to scold the child for his “inappropriate” answer.

Elsy Kusander’s 10-year-old son logged into his remote classes for another day of online learning on Friday, Oct. 2. Little did he know he’d be scolded for his support for Trump.

Each day, Stanton asks his students a daily question. This time he asked students, “Who is the one person you admire and why?” Students are asked to write their answers in the online chatroom. According to a screenshot, Kusander’s son wrote:
I admire Donald J. Trump because he is making America great again. And because he is the best president the United States of America could ever, ever have. And he built the wall so terrorists couldn’t come into in the U.S. Trump is the best person in the world. And that’s why I had admire him.

Stanton almost immediately kicked the student out of the chatroom, deleted the chat, and proceeded to attack the president, while calling out the student for mentioning him. The student, who I am keeping anonymous, immediately told his mother.
Click to expand...

Article is long. More can be found here: A Seattle-area teacher went on a rant about Trump to 6th graders. When a parent complained, he misled her about what happened. But it's all on video.
mynorthwest.com
Last edited: October 5, 2020

I can translate this out of 'PR she devil' and into "tax accountant-ese". Democrats will raise domestic corporate taxes, but that doesn't matter because they will re open the offshore tax loopholes that big corporations loved but are too expensive for average american businesses to use.

Other Christian
Gold Member
Trump should say he's willing to make a small concession at the next debate.

Offer to give ol' Bumbling Biden a nice hug...

Other Christian
Gold Member
Feeling a lot more, like the fun of 2016.

Orthodox
Complaints aside, I’ll be voting for him next month.
A