"The Great Reset" plan by the World Economic Forum

Grow Bag said:
The British armed forces are very interested in being established in the Sahel corridor of Africa. What do they know that we don't?
“The Sahel is a dam. If it bursts, Europe will be submerged” Mali’s President once said. If he is right, the European Union will need to do better in order to address the tremendous challenges agitating this part of the world, while preserving its own security and stability.

ORG's research on Fusion Doctrine in Africa summarised in infographics.

The European Union in the Sahel - BullsEye

5 minute read Why the Sahel matters? From the 2018 State of the Union Speech of Mr Juncker, to the more recent Angela Merkel’s address to the European Parliament of November 2018, the growing centrality of Africa in the future of the European Union’s security and stability has adamantly...
www.bullseye-magazine.eu
Click to expand...

The Sahel region is greening according to this article. Maybe Western military presence and interest in the Sahel has more to do with ring fencing it as a future wheat belt.

Grow Bag said:
With his semi-woke posturing, he was such fly in the ointment of dissidents a few years ago that I stopped listening to him. So reading this I thought I'd check out a few of his latest videos and was heartened. He took apart Bill Gates, without really taking him apart. He just arranged video clips and read out some quotes that could leave nobody in any doubt about Gates. Quite impressive.

Excellent video. Physiognomy is real. Russell Brand seems to be quite based, and he puts forward his arguments in a very neutral way that appeals to fence-straddlers. He's also quite charismatic which increases his likeability among the average folk. Highly recommend giving this a watch. Might even send this to my parents.

Most of you on here know this, but in case you need a 90s primer

Easy_C said:
I’ve worked at one of those banks. I don’t think they’re very well equipped for what’s happening from an intellectual, finance, operational, or tech aspect.

What I suspect is going to happen is that banking will be handed over to the tech companies, meaning some combination of FB/Twitter/Microsoft for a digital currency wallet that’s tied in with your social credit profile.
Click to expand...

Banking is already digital. The banks with the many physical branches are basically more like an extension of the local retirement home, full of boomers who are too stupid, old or lazy to do online banking.

Money is already mostly digital, the blockchain technology will just allow for a much cheaper cost per transaction. In case you missed it, most of the worlds banking software infrastructure is already based on IBM software and running on IBM Mainframes, using 60s and 70s tech. A big corp (IBM) already owns most of the "keys" (hardware backdoors) to the financial backbone of the world.

that’s very basic level stuff. By “biggest banks” I didn’t mean I was a teller or something. I was in a cushy, high paying job at the Wealth Management/Asset Management division’s headquarters and my comments were not focused on a discussion of the retail banking market.

Keep in mind that the current digital money isn’t the same thing as what they’re proposing l, specifically to transition money to an official US cryptocurrency that has a centralized ledger. There are quite a few white papers out there about how if they get rid of physical cash they can also get rid of the barter economy and get the tax they think they’re owed on every exchange.

Europe already has been moving in this direction and done some current cancellations.
Last edited: March 16, 2021
P

Grow Bag said:
With his semi-woke posturing, he was such fly in the ointment of dissidents a few years ago that I stopped listening to him. So reading this I thought I'd check out a few of his latest videos and was heartened. He took apart Bill Gates, without really taking him apart. He just arranged video clips and read out some quotes that could leave nobody in any doubt about Gates. Quite impressive.

While he does reveal a lot of truth to people who watch, notice his subtle manipulation. He is hinting that the solution is a communist world government. He does this by saying that he doesn't believe people are evil, it's capitalism that causes them to act this way. He also says that corporations are too powerful and that national governments are too weak to stop them so we need something stronger to keep the corporations in check.
I

MilvianForce said:
“Don’t own anything” pfft. These billionaires are nuts. Most if not all. Look at how majority trat their suppliers, customers, employees etc. They don’t care. So it’s okay to amass wealth for yourselves but everyday people? No it’s bad. Here eat this lab meat, take in a fake sun, take this rushed vaccine.

I don’t get it a billion is more than enough to get everything you want in life and more yet these people are always hungry for more selling out fellow country men etc. I’m not a socialist nor a communist but God dang we need some proper cheques and balances in place. We let corporations dictate everything and it’s pathetic.
Click to expand...

Definitely. The financial 'elite' may be rich materially, but they're rock-bottom poor in mind/spirit. Who in their right mind would want to get even more of the world's wealth when they already have so much wealth that they could never spend it all?

These people are complete parasites. They contribute little or nothing of lasting value to the world; the only thing they're good at is taking from others. In fact, they've no doubt retarded our progress, because their sole aim in life is merely accumulation. Take medicine as an example: pharma only cares about lining their pockets, and actual cures are relentlessly suppressed.

Pelern said:
While he does reveal a lot of truth to people who watch, notice his subtle manipulation. He is hinting that the solution is a communist world government. He does this by saying that he doesn't believe people are evil, it's capitalism that causes them to act this way. He also says that corporations are too powerful and that national governments are too weak to stop them so we need something stronger to keep the corporations in check.
Click to expand...

Yes, he made no secret in the past of being a socialist and likely his political views haven't shifted much. At the present time, though, where people are on the political spectrum is secondary to the far more pressing problem technocratic rule. Now is not the time to bicker about ideological differences. If we don't offer a united front against these technocrats then these differences will be moot. So for the time being anyone calling out the UN, WHO, WEF gets a pass from me.

This is a good summary for the first half of what has gone on, and how nothing really matters at this point regarding "enlightening" others or getting them to wake up. What's done is done. He is correct that the only thing one can do now is (my editorial) prepare a local community, save goods for trade or have available foodstuffs, and have certain financial options. At mid-video, he goes off the rails because he listens to other people regarding BTC and doesn't have a good understanding of what bitcoin is, or what the existing structure of technology and banking is.

Blockchain was an innovation that was always going to occur. To act like BTC or other cryptos are "prepping" you for the coming digital currency is not understanding what was going on. The point that needs to be shouted from the rooftops is that the government has always wanted to get rid of cash and have a digital currency that is by definition trackable and through which taxes cannot be avoided. Understanding that, you will then realize that something like BTC (certainly Monero) is actually a foil to this plan, since its characteristics are those that do not require centralization, "trust", and as a result, are an escape from financial repression inherent to political, centrally controlled expressions of "money." In other words, currencies are manipulation tools for the world reserve holders domestically, and world reserve in relation to the other world currencies internationally (currently the USD, obviously). This doesn't have to be bad, but like liberalism, always regresses into an increasingly chaotic and power driven mania, because on average humans devolve to the maxim "Whatever can be exploited will be exploited" - particularly when you have lost virtuous leadership (which by the way is why you release yourself from a gold standard or such disciplined principles, etc).

BTC may not save you from local danger and difficulty in procuring food or drink for survival should a crisis scenario happen, but it does give you the option that nothing else does: worldwide mobility with value basically without risk. You can set up shop in a favorable jurisdiction and you have no issue with trying to carry heavy gold bars, or stuff bags full of cash (both of which are illegal and not all that hard to identify physically). This is where the "physical" aspect that comforts people so much with assets, is a huge negative, it essentially disqualifies you from going anywhere else in the world if you don't want to arrive and have nothing to your name. At a minimum, your language in a new location will be all the value you provide with your desired asset. Showing up as a border jumper and/or farmhand laborer doesn't differentiate you at all from the rest of the clown world who may be trying to do the same thing. 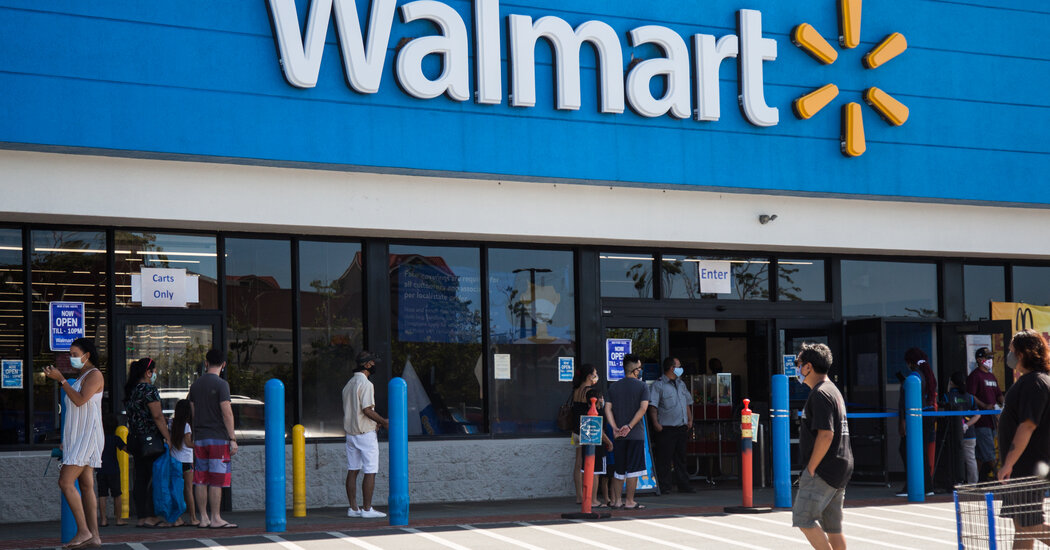 "that no man might buy or sell, save he that had the mark or the name of the beast or the number of his name"
Last edited: March 17, 2021 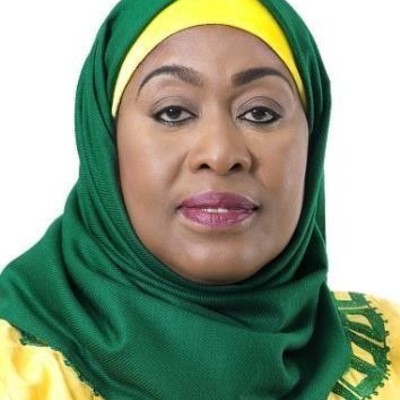 Was speaking with a well connected contractor today who told me because Trump made no wars. Elite went to get the equivalent profits from Pharma.

Of course. This couldn't be more obvious. This woman leader fetish is beyond pathetic.

It's just another proof that this whole thing is staged by we know who. It's like a movie script.
Last edited: March 17, 2021

RIP. Magufili was one of the few leaders who spoke out against COVID and the globalist agenda. This is all very suspect. We may never know for sure how he died, but if I were a betting man I know what I would put my bet on in regard to what happened to him.

Here's a video of him just a few months before he died.

Gold Member
@Ikecooper: The 'New World Order' is on the Bank of England's website.

Mark Carney is connected to some powerful banks and is, of course, on the Board of Trustees for the World Economic Forum.

His speech below literally references the 'New World Order' in an economic sense. This was given in 2019 in Tokyo at the Institute of International Finance. I haven't found a video yet, but the speech is legitimate. 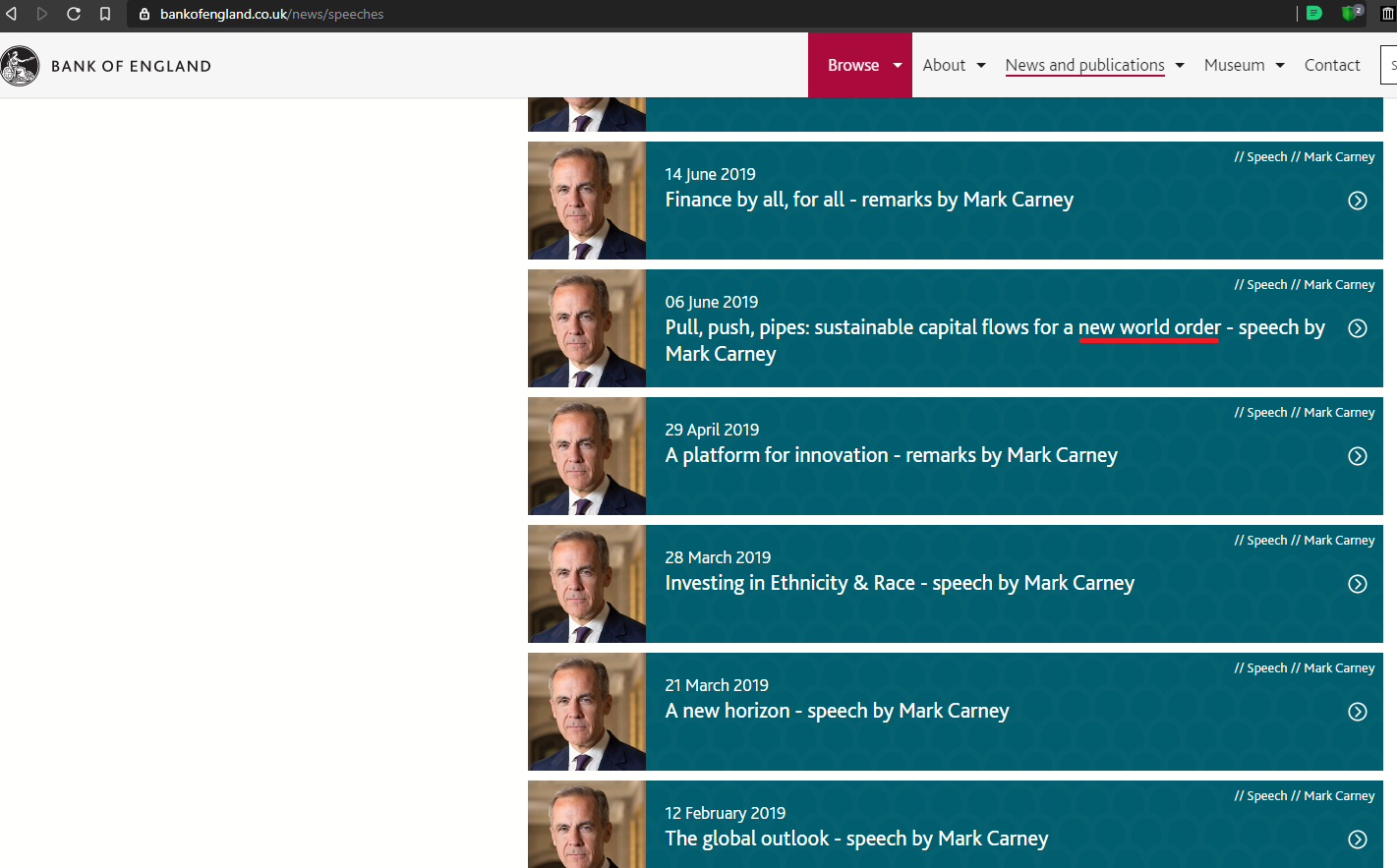 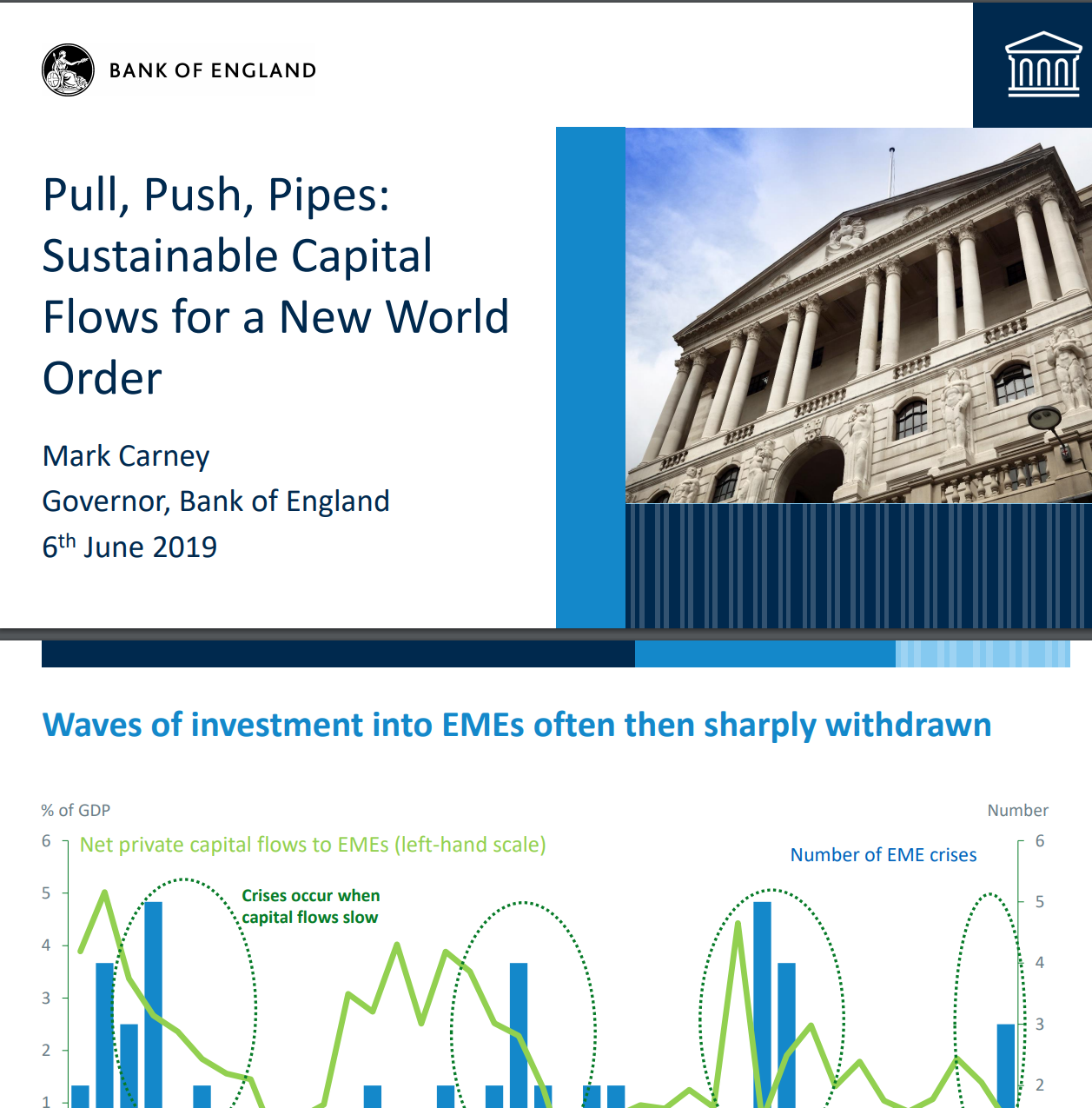 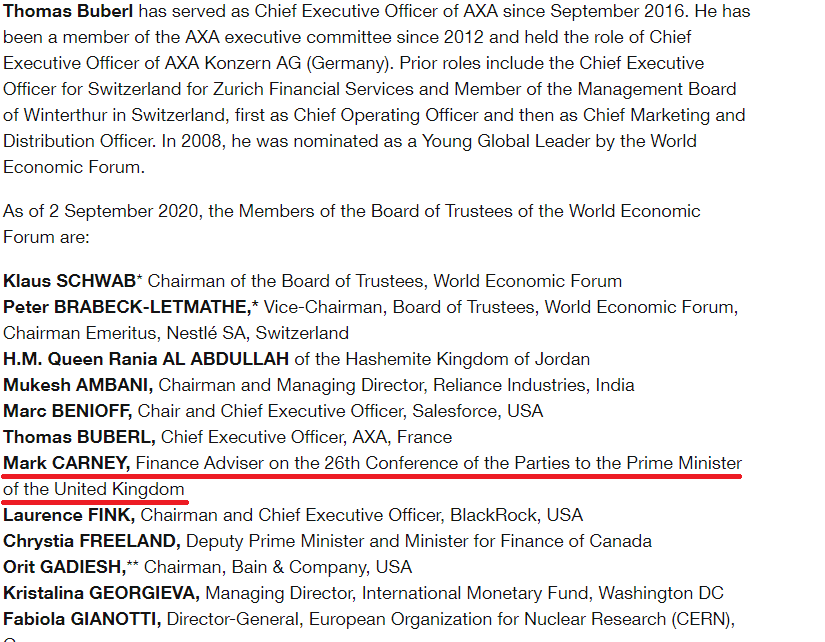 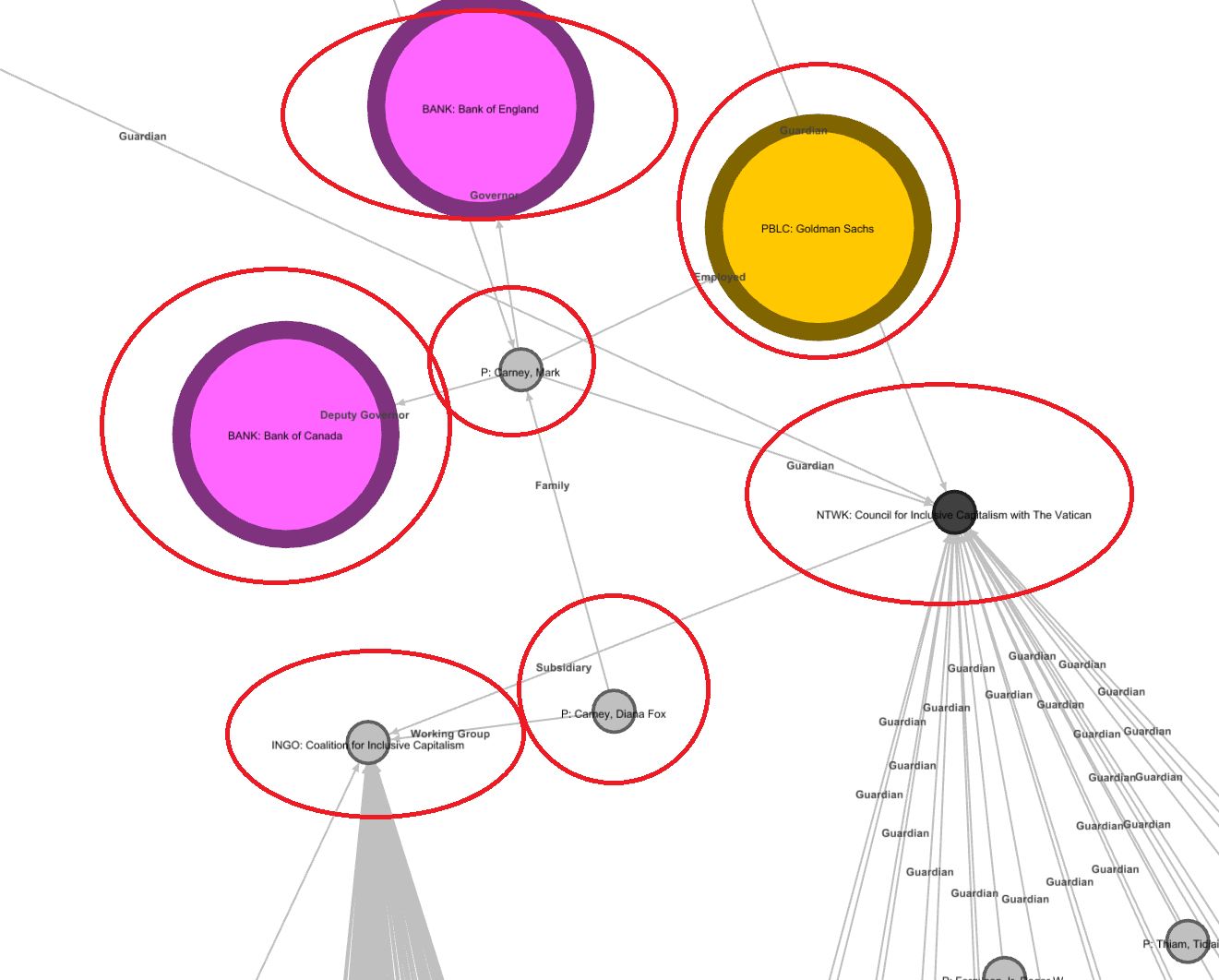