The great soy boy debate... which side will you choose?

Gold Member
I am thinking of using the term 'soyness' in the future, as in "Yes, your soyness."

Gold Member
You should never take advice from two men cat fighting on the internet on masculinity.

From Reddit a group of guys got soy boy tattoos on their ankles...wait aren't anklets for girls?? Anyways...
https://www.reddit.com/r/The_Donald...als_are_reaching_levels_of_soy_never_thought/

TheUsual said:
From Reddit a group of guys got soy boy tattoos on their ankles...wait aren't anklets for girls?? Anyways...
https://www.reddit.com/r/The_Donald...als_are_reaching_levels_of_soy_never_thought/
Click to expand...

Next thing you know they will be flushing their heads down the toilet and beating up each other for lunch money.

Gold Member
^ He needed a lot of shots of wheat grass to make it through the pain of that tattoo.

The amount of soy in that man.

Gold Member
^
When you forego 'brownie points' & instead attempt to amass 'soy-points'...

Assuming it's a truthful account (no initial pun intented), the logical thing to do after being molested by another man is to divulge it all on Reddit...

I experimented with a vegan diet for two years. These were the upsides:

- Lost a ton of weight
- Learned how to cook quite well because I ate actual vegetables and not Morning Star Farms bullshit
- Can be as unhealthy or healthy as you make it. Some vegans just want to eat fake cheese / Smart Balance smothered on toast, others will actually eat salad, coconut oil, edamame, block tofu, etc.
- Naturally low calorie, so I lost a ton of weight.
- Learned how to juice like a champion (juicer, not roids)
- Those guys who look like weak pussies generally aren't eating enough calories, they aren't working out, and what they do eat is mainly franken-food (fake meat, fake cheese, soy milk, etc.)
- Still maintained an athletic life once I got my calories / macronutrient ratios squared away (do not even think about trying a low carb vegan diet).

- I started to develop carpal tunnel syndrome in my left hand. It would go numb when I drove. This is probably because (a) I stopped taking fish oil; (b) food like tempeh (good for fake wings and all kinds of other "meat" dishes") has a ton of gluten in it; (c) I was eating a lot less calories so my activity level went down, ergo, my circulation started to suck.
- Makes eating out a bitch. Especially if your group of friends / clients / colleagues are masculine. In terms of dating, nothing is more of a mood killer than "There's nothing on this menu I'm going to eat."
- Makes camping / going in the wilderness a total bitch. Prepare to either live off of avocados, trail-mix, or Cliff Bars (which I consider a franken-food).
- All of your meals have to be prepared if you actually want to eat healthy. Prepare to (a) have to learn how to cook; (b) spend a lot of time in the kitchen.
- I've never understood the argument against eggs when they are sourced humanely. My eggs come from my friend's farm. There is zero harm to the chicken or anything living. Same with my butter - I get it from Amish farms. Delicious.
- Libido went way down (presumably due to lack of saturated fats and cholesterol)
- Too many supplements. B-12, soy protein shakes, etc. A can of tuna or sardines wrapped in lettuce is so much faster, easier, and tastier.

After a few years vegan, my diet now is mostly pescatarian, and maybe 20% beef, pork, etc. Eggs, fish oil, and tons of protein basically fixed all the downside issues. I'm glad I did it because I learned how to cook with fresh vegetables, and where to take vegan / vegetarian women on dates. I'll usually do one day that's meatless (Fridays during lent), but occasionally a cheat meal is calling my name (last night a cheesesteak just hit the spot).

Most vegans look too thin because they don't eat enough, and when they do it's not enough of the right stuff. You can have a nice, healthy vegan diet if you eat enough protein, supplement, and lift weights. (Another part of the problem is lifting is viewed by many liberals as 'toxic masculinity').

That aside, there is no point in restricting your diet to just plants. Having read just about every book on being vegan, I can debate this with anyone.

- It's not necessarily a healthier diet, and it is a myth that saturated fat causes heart attacks / strokes. Saturated fat is good for men. (That said, you can get saturated fat from sources like coconuts, avocados, brazil nuts, almonds, etc.)
- There is no ethical or health argument against sustainable humanely sourced eggs, butter, cheese, etc. Period.
- Yes, I agree that the current agriculture system is unsustainable and bad for the environment. However, those Morning Star Farms burgers and fake meat contribute just as much. Those foods only exist because of the same system you claim is killing the world. If you want to be vegan, it means actually eating fruits and vegetables.
- I do not see a point to limiting your diet so strictly, when you can easily obtain fish, meat, and dairy that is humanely and locally sourced.

All in all, I don't dislike vegans or their diet. I don't even think being a vegan is necessarily un-masculine.

I do get where PJW is coming from - these "men" who play Nintendo all day, drink Soylent, talk about how lifting weights is "toxic masculinity", vote for Hilary, and spend all day Facebooking about identity politics are basically a bunch of females who have penises.

Gold Member
What do you think members cook like?

Look at this guy's ARMS! He barely looks human! He looks like something that's going to mutilate your cattle and leave weird-looking circles in your wheat field!

Something's in the water. I swear something is in the water that's doing this to people. Humans shouldn't look like this.
D

How is it possible for someone to have a double chin when they're that skinny. He looks a candy apple.

The cuck's nails are painted too.

Look at this guy's ARMS! He barely looks human! He looks like something that's going to mutilate your cattle and leave weird-looking circles in your wheat field!

Something's in the water. I swear something is in the water that's doing this to people. Humans shouldn't look like this.
Click to expand...

Gold Member
Not even once Jesus Christ, with a gun to my head I would have sworn this was satire but it's real. 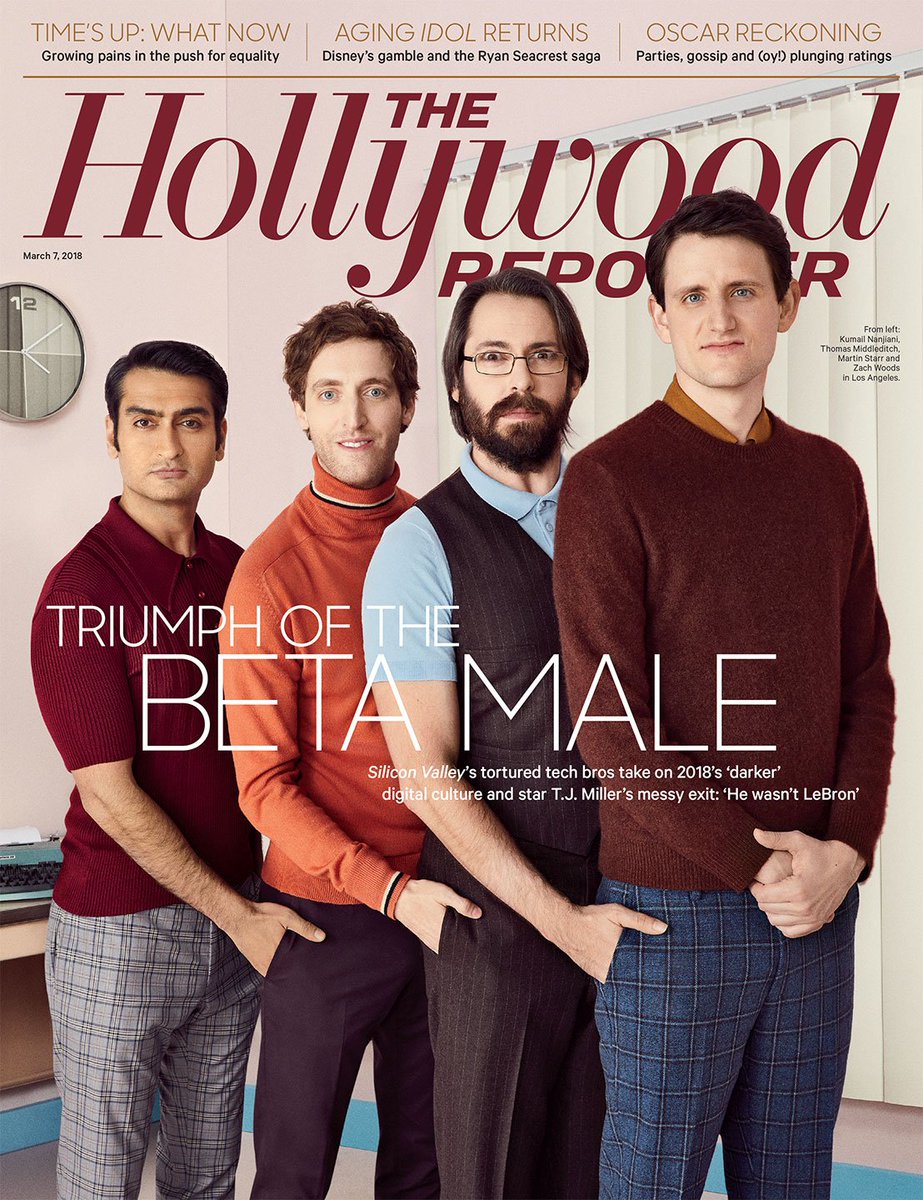 < There is no triumph. The high-end soyboy nerd millionaire in Silicon Valley has to get Red Pilled, or he will be divorce raped multiple times later on.

Both men are equally successful. Both are equally intelligent, but only one of them is keeping pussies well lubricated.

Gold Member
I always wondered what wearing a waistcoat or a sweater over a polo shirt would look like. Now I know so don't ever have to think about it again.

That Amazon guy is taking something more than some vitamin pills and flushing his colon with sparkly spring water.

Canopus said:
Jesus Christ, with a gun to my head I would have sworn this was satire but it's real.

They are actors from a television series called "Silicon Valley"

The first two series are pretty decent, but I couldn't be arsed to finish the third as it was getting too formulaic.
Share:
Twitter Email Share Link
Top