So I'm in Canada.
In Canada we have this CERB and CESB
Students, get apparently 10,000 (hopefully this is a one time) for the school semester (year?)
Working blokes (me) got 2000 every month so far (3) the shutdown persisted.
My parents (retired, snowbirds who may no longer be able to afford driving to florida yearly) get a one time payment of 300

WTF?
Seriously Canada... get your shite together. That PM of ours really is a True Doh!
H

I don't know if the Hill is conservative or liberal:

The HEROES Act fixes what the CARES Act broke


Conservatives call the House Democrats’ Health and Economic Recovery Omnibus Emergency Solutions (HEROES) Act a “gigantic political scam.” Senate Republicans say HEROES, passed by the House on May 15th, is “dead on arrival when it reconvenes. As they negotiate with Democrats, Republicans should think carefully about certain student loan relief provisions in the bill.

Even in good times, a substantial portion of 45 million Americans’ paychecks go to student loan payments rather than to goods and services that keep our economy churning. There’s little doubt that this debt contributes to suppressed consumer consumption, which stifles economic growth. In this bad time, Americans collectively owe $1.6 trillion in student debt. This debt burden is now dramatically heavier with the economic shutdown and coming diminished post-pandemic employment opportunities.

Some say no additional student loan relief is needed because the Coronavirus Aid, Relief and Economic Security (CARES) Act that Congress passed in March temporarily suspended student loan payments. That would be a decent argument if CARES applied to everyone, but it doesn’t.

With CARES, Congress gave a six-month, interest-free payment “pause” to about 35 million debtors in the process of repaying the federal government for their education. These are commonly called “direct loans.” The government imposed no penalties or credit consequences. Direct loan borrowers didn’t even have to sign up. Automatic payments just stopped.


But CARES left more than seven million borrowers with “commercial” or “private” loans to fend for themselves. During the Department of Education’s Federal Family Education Loan Program (FFEL), roughly 75 percent of FFEL loans were private, and not always distinguishable from direct loans. At least seven class action lawsuits for deceptive practices have been filed against the nation’s holder of the largest portfolio of private student loans.

After CARES became law, some private lenders offered a 90-day forbearance, with interest continuing to accrue. On a $60,000 loan at 3.75 percent interest, that’s about $500 of accrued interest for a 90-day payment “pause.”

Some private lenders wanted to tack that accrued interest onto the loan’s principal, to earn even more interest. Other lenders designed penalties, such as permanently ending the quarter-point interest-rate discount some borrowers get for automated payments. A quarter of an interest point on loans with years of repayment to go is a steep price for short-term relief.

HEROES would end the profiteering and provide protections for private debtors neglected by CARES.

On these provisions, Democrats must stand firm. Republicans, who must recognize that a new rash of loan defaults won’t improve the economy, should cooperate. Not just because it’s “fair,” although it is: Viruses and economic crises don’t differentiate between direct and private student debt.

Rather, it’s in the federal government’s interest. Almost $170 billion in private-lender student debt is federally guaranteed. Yes, many of the same private lenders declining to give borrowers an interest-free “pause” are guaranteed to get their money back, if not from their borrowers, from U.S. taxpayers.

The debtors who would benefit most from HEROES are those who borrowed private FFEL program loans.

The last year FFEL made private loans was 2009. So, all private FFEL borrowers (in good standing) have been paying on their student loans for at least a decade. Private lenders have earned a ton of interest from them. Now, FFEL borrowers need this “pause” to help avoid the draconian consequences of default after years of diligent repayment.


To define draconian: Lenders file a default claim and are paid, both principal and interest. The loan’s title transfers to the federal government, which has incredibly powerful tools to extract repayment. They include garnishing wages, pension, social security and disability; revocation of professional licenses required to work and more.

Student loan debt cannot be discharged in bankruptcy. When a defaulted borrower enters a repayment plan, 25 percent of all future payments are diverted for “collection fees.” Interest on the principal continues to mount, seemingly without end.

Before the current crisis, 5.5 million borrowers had defaulted on $120 billion in loans. Research suggested that nearly 40 percent of borrowers could join them by 2023.

The federal government is deepening its own debt by the trillions in an effort to save the economy. Surely now is not the time for taxpayers to finance billions of additional, preventable, student loan defaults.


It’s also no time to torture private borrowers who have been conscientiously paying student loans for a decade and now may be blameless victims of the recession. None of this spells “stimulus.”

Any economic stimulus plan will struggle to be effective without real college debt relief. Congress must correct the student loan relief mistake in CARES by eliminating the discrimination between “direct” and “private” student loans. Long-term economic growth for all of us depends on it.
Click to expand...

The HEROES Act fixes what the CARES Act broke

The Senate needs to hurry up and vote on this bill...what is taking so long?
H


The Coronavirus pandemic is having a devastating toll on every American’s lives and on our livelihoods and on our way of life. Furthermore, the pandemic has exposed many of the problems and dangers of our nation’s inequalities, such as the racial wealth gap, the digital divide, weaknesses and challenges to our education system, problems in our criminal justice system, employment and the health care disparities to name a few. This includes how these inequalities exacerbate our attempts to make our nation whole again.


In response to this catastrophe, the U.S. House of Representatives passed H.R. 6800, the “Health and Economic Recovery Omnibus Emergency Solutions,” or “HEROES ” Act on 5/15/2020 by a vote of 208 yeas to 199 nays, and has sent it to the Senate for consideration. The HEROES Act is a bold and much needed response to many of the more pressing problems facing our nation due to the pandemic. H.R. 6800, provides more than $3 trillion to federal agencies, state and local governments, small businesses, and individuals.


Click the following link for a summary of the nearly 1,900 page bill, review our Action Alert and take Fast Action.
Click to expand...

The bill should pass in the Senate now; otherwise there will be a riot/looting/vandalism/etc. Why? Because of racial injustice and most importantly, Black Lives Matter

If this bill don't pass, it means all the white people in the U.S. Senate support 5,000 years of slavery by Europeans 
Will there be more stimulus?


Here’s what you need to know.

President Donald Trump has indicated his willingness for another stimulus package. Some top priorities, among others, may include:


Will there be a second stimulus check?


Payroll tax cut and state aid could be priorities

A payroll tax cut ranks highly on the president’s wish list for the next stimulus package. While the White House will have input, the next stimulus bill will be drafted by Republicans with some say from Senate Democrats. Trump said Friday that a payroll tax cut would provide “tremendous incentive” for businesses and their employees. “We’ll be going for a payroll tax cut,” Trump said Friday. “We think that will be incredible in terms of what we’re doing because again, we’re going to be bigger, stronger, better than we ever were.” A payroll tax, if passed, could last until the end of the year, for example. Senate Democrats — who do not support a payroll tax cut for the next stimulus package — are focused on other issues ranging from a second stimulus check and hazard pay to student loan forgiveness and aid to states and cities severely impacted by Coronavirus.

McConnell has said the next stimulus package will be the last stimulus bill. The latest job report may discourage Republicans from approving another multi-trillion stimulus package. Prior to voting, there will likely be one more monthly jobs report. If the unemployment rate continues to drop, the chances for a second stimulus check, for example, will drop further. Anything can happen in a final stimulus bill, but McConnell seems most focused on stimulating the economy, potentially through a return-to-work bonus and other targeted incentives to bring people back to work.
Click to expand... 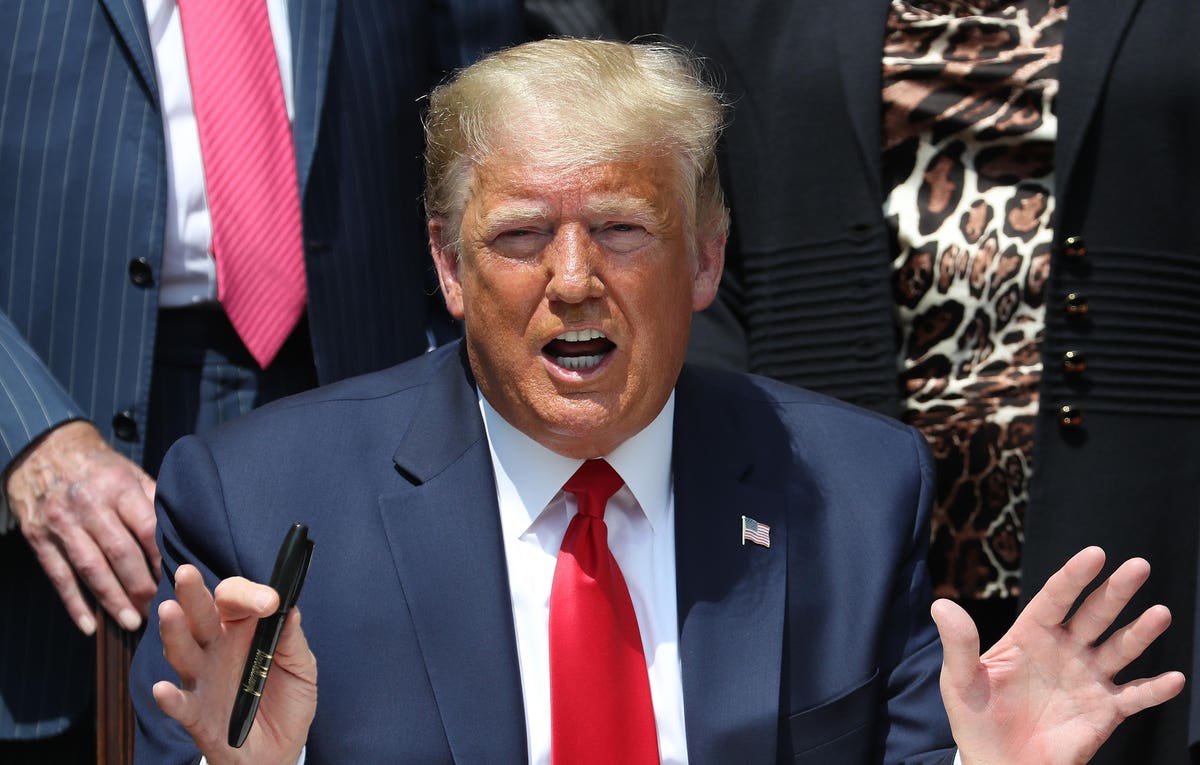 Hindu Man said:
I would love to see these type of people lose their jobs...LOVE.
Click to expand...

Brought a smile to my face:

I am not afraid to admit that I have been receiving $800/week (pandemic unemployment assistance) in Colorado. It expires on July 31st. I hope the Heroes Act comes into law because I would love to continue to receive $800/week as a full-time student lol.

Gold Member
It makes zero political sense for Republicans to low ball on the unemployment benefits and stimulus checks. There's an election in November! What's another few hundred billion on top of our current debt? Even if Republicans cut benefits for right now, if they don't win the election the Biden administration is just gonna be cutting checks left and right anyways. If voters received a $3000 check with Trump's name on it, they would be much more inclined to vote for him. Republicans just keep shooting themselves in the foot

Cortés said:
It makes zero political sense for Republicans to low ball on the unemployment benefits and stimulus checks. There's an election in November! What's another few hundred billion on top of our current debt? Even if Republicans cut benefits for right now, if they don't win the election the Biden administration is just gonna be cutting checks left and right anyways. If voters received a $3000 check with Trump's name on it, they would be much more inclined to vote for him. Republicans just keep shooting themselves in the foot
Click to expand...

At this point the stimulus vs no stimulus debate is just arguing which route we want to take to crash into a brick wall. Either no or little stimulus and the economy is crushed thanks to our fear and lockdowns or we encourage unemployment, drive up the already insane debt, and start pushing towards famine and the further collapse of our infrastructure. Maybe without stimulus, empty stomachs would encourage the end of the shutdowns.
Share:
Twitter Email Share Link
Top