Gold Member
Well. If there's anyone who should start this thread, it may as well be me. 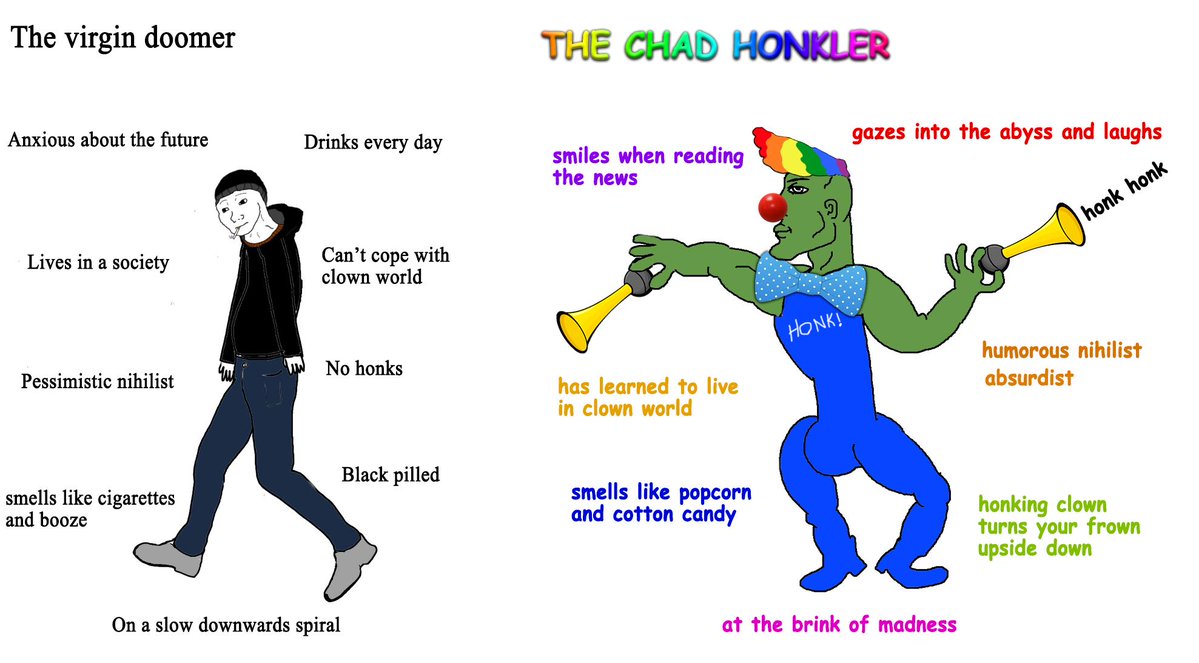 Clown World.
Recognizing the ridiculousness & retardartion of the modern world.
Especially the highly politically correct, modern world.
Yet simply sitting back on the sidelines, while pointing & enjoying a hearty laugh.

Is the honk pill the alternative to the God pill as successor to the Black one?


ilostabet said:
Is the honk pill the alternative to the God pill as successor to the Black one?
Click to expand...

The 'honk pill' is definitely more fun than the 'black pill'.
Yet does not preclude the 'God pill' by any means.

Clown World is a man made construct. Nothing to say God won't correct Clown World.

If the Chad Honker is a nihilist, he is very far from the God pill tho.


ilostabet said:
Is the honk pill the alternative to the God pill as successor to the Black one?
Click to expand...

I would put honk pill as a subset of black pill.

Though even if you're God pilled, you still retain truth (red pill) and acceptance (black pill).


CynicalContrarian said:
Clown World.
Recognizing the ridiculousness & retardartion of the modern world.
Especially the highly politically correct, modern world.
Yet simply sitting back on the sidelines, while pointing & enjoying a hearty laugh.

Mentally ill people changing sex/race/age for the purpose of getting better treatment.
Most valuable assets of society are being called "Nice guyz" as an insult, squeezed like lemon from their labor, money and more, to get thrown away when of no more use, spit on, mistreated till they enter the grave (especially one category) and the less capable are rewarded with sex and advantages.

That's the only pill you can swallow, holywood either got hijacked or is making the said absurdity of the world more fun. 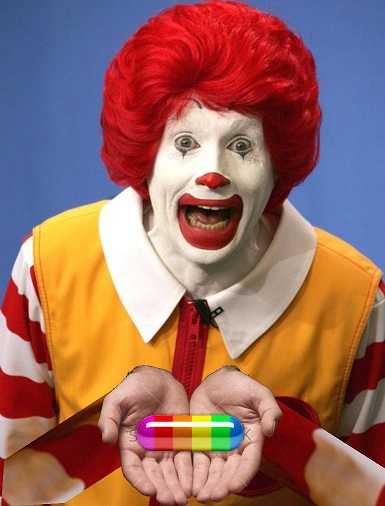 It’s an effective way to point out modern absurdities, just like court jesters of old.


Glaucon said:
If the Chad Honker is a nihilist, he is very far from the God pill tho.
Click to expand...

Much easier to detach oneself from the rabid rantings & ravings of modern folk, when you believe in something greater.

Now that may not fall in line with a distinct definition of nihilism.
Yet the notion of 'Clown World' is more a rejection of the absurdity of the modern world than anything else. While having a good laugh all the same.

Even from a "persuasion" angle.
Arguing or 'brow-beating' someone over their foolishness may not amount to much.
Mere mockery of said foolishness may well cause the other person to evaluate their position.


Hell.
The whole memetic "Honkler" thing could well be just a timely & elaborate marketing campaign for the new Joker movie...

Yet I see that I was using the term "Clown World" as far back as June 2017 on Twitter.

4chan kids keep pumping out memes that are both funny and make sense as social commentary.

If you are an intellectually curious and creative person, there is no greater prison than being associated with the contemporary left. What was the last time they produced anything remotely as interesting as the Clown World meme?

Those kids at it again. Probably the last bastion of comedy we have.

This really started back in 2008 with Ledger's Joker in The Dark Knight.


Even ten years ago the clown-pill sentiment was there, which is why the 2008 Joker was immediately sainted by comic movie standards and why every version since has been complete trash by comparison. Where there are anti-heroes Ledger's Joker was a sort of anti-villain.

This little clip that lasts less than 90 seconds contains some of the greatest film quotes of that entire decade.


Every time I watch that movie I think "I can't believe they ever green-lit this for release to the proles".

Amusing side-note #1. In the first clip I only just noticed that the Joker is holding back the hammer on the revolver. Not quite as committed as he wanted Harvey to believe.

The combination of factors is just too bizarrely relevant to pass up.
Asian guy.
Clown.
Money.

Even though my sons have no hair, they are already chads. It will be tough to corral their impulses in this clown world.

Also, I don't see much difference between the "latest meme" and the "latest trend". Both require that you accept and embrace them to be seen as cool by your peer group.


Avoy said:
I don't see much difference between the "latest meme" and the "latest trend". Both require that you accept and embrace them to be seen as cool by your peer group.
Click to expand...

Sometimes it's a good exercise to look at a word's original meaning.

The word "meme" was coined in analogy to "gene". A meme is an idea that is replicated from person to person. A trend or a fad, in the context of human society, is a short-lived meme. By definition, all trends are memes, but not all memes are trends - memes can be very long-lasting. There is a difference.

This particular meme has a lot of information embedded in it. A perspective on the general state of things (crazy), the scale at which the phenomenon takes place (global), an attitude towards the perceived scenario (humorous / nihilistic), and finally an aesthetic through which that attitude is exerted (clowns). The aesthetic is recognisable and easy to replicate, making the meme all the more viral.

Yes, there are teenagers who will be posting about the Clown World because they think it's cool. And being adults we can't hope but to find the whole thing silly. Cringe-worthy even. Who cares? The core idea is solid: the world is batshit crazy. It's better to point things out than to say nothing, and this meme is efficient at pointing things out. As far as Internet memes go, this is pretty good.