Days of Broken Arrows said:
They walk their dogs during sleep hours and when their dogs bark, they stand in the same spot, so the barking goes on and on and wakes everyone up.
Click to expand...

Yep. "Oh that's just my 'baby' he is from a shelter and sometimes gets stressed " (no effort to silence the dog)

Days of Broken Arrows said:
I live in a suburban enclave where this happens. They walk their dogs during sleep hours and when their dogs bark, they stand in the same spot, so the barking goes on and on and wakes everyone up.
Click to expand...

I know our society is broken, but I cannot imagine a world where people do this to others.
I also can't understand the behavior of either party in the dog video, but then again, NYC makes you crazy.
United we stand, divided we fall...

All rolled into one.

Yet while the other Clowns steal TV's, this guy is going to seize the day!

Days of Broken Arrows said:
These days, the obnoxious dog owners have invented a new way to annoy people. They walk their dogs during sleep hours and when their dogs bark, they stand in the same spot, so the barking goes on and on and wakes everyone up.

This is troublemaking behavior. Nothing "Alpha" about it -- especially since the dog walkers are inevitable chubby middle-aged white women with those unsightly corporate "bowl" haircuts.
Click to expand...

I have one "dog mom" in the apartment across from me who likes to take out her "fur baby" at 6 in the morning and loudly converse with it right under my window.

Barf. This is what I wake up to every morning.

Gold Member
This is what high powered sprinkler systems are for.

Watering your lawn is a secondary benefit.

Gold Member
Noting how the China virus had curbed so much in the way of pollution worldwide.

I think Greta Tardberg only has one thing to say to the rioters. 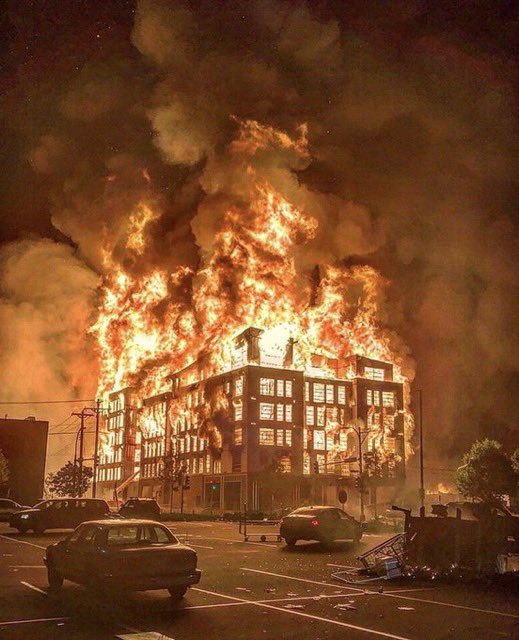 wayfaringstranger said:
that's how people are interpreting it, but it's a perfect example of a woman misusing the state's authority - if this guy was white and/or not recording it, he'd be out of a job and/or in jail and the media would not care.

BTW this woman's life is OVER. She will never work again, she will probably have to leave New York City. It will be interesting to see how she handles.
The media is playing up the racial angle - but the real story here is the misuse of laws and assumptions designed to protect women. Feminism has created this sense of entitlement.

It is also a good illustration of the low-level mental illness our dystopian society has created. - and remember this woman had an important job at a major investment bank and she's very obviously mentally unbalanced. Think of all the decisions she and people like her make every day.... Absent of faith, stable society /family and living in a chaotic distracted nihilistic world a significant portion of the population is taking some sort of medication for anxiety or self medicating with alcohol and/or cannabis.
Click to expand...

This invites us to consider how privileged she STILL is.

It astonishes me at how the superwoman feminist paradigm (sort of like Soviet Man) which was supposed to generate "strong women" instead produces mentally unstable women such as the women above while on the other hand, to be a normal man today and have a decent job and family, one has to engage in self-improvement and game at a level which would be similar to that of a chad a half century ago. If most of us got into a time machine, we'd be a Connecticut Yankee in King Arthur's Court.

Leonard D Neubache said:
This is what high powered sprinkler systems are for.

Watering your lawn is a secondary benefit.
Click to expand... Jaszczurka said:
But this woman, if she has a bit of common sense, could find some minimum wage job and get married up and become a housewife.
Click to expand...

shes over 40, not good looking and looks like damaged goods apparently tried to sue some guy she was having an affair with a few years ago.
At least we used to have convents for this sort of thing.

wayfaringstranger said:
shes over 40, not good looking and looks like damaged goods apparently tried to sue some guy she was having an affair with a few years ago.
At least we used to have convents for this sort of thing.
Click to expand...

I just had an amusing thought for the evening before having a glass of wine.

This gal could probably throw on some makeup, create an OnlyFans account, and still probably survive off of it. If she did something similar for a dating website, how many responses from men in her age range with a decent income would be in her inbox within 24 hours?

My mom got a similar one to this to use on our neighbors untrained dog that loves to bark at everything, hes quieted down the past month since she gets him with it whenever she hears him go off.

I'm surprised how many people don't think this dog luring guy is not a total arsehole. Would anyone really be accepting of some stranger ordering you around? Maybe it's my teenager like distaste for authority - but if some stranger were to ask me 'sir, your dog should be on a leash' - the first thought i have is the anger of 'who the fuck are you to tell me what to do'. I'm not going to take what they say at face value, because i would have already judged my actions to be reasonable. Then if said stranger started filming me against my will and luring the dog away with treats I would for sure become aggressive. That guy is behaving in an antagonistic way and he knows it. I also think, had the dog walker been a man of equal size, he wouldn't have gone to the measures he did - because the threat of an escalation to physical violence would so obviously exist.

The woman instinctively knows this, she's being bullied and backed into an unreasonable corner by some holier than thou arsehole. This isn't about 'soy dog ownership' or about entitled Karen. This is instinctive behaviour that everyone in that situation would feel. She doesn't have the option to go at this guy physically, so she resorts to the power that she does have - the one of a white woman vs a black man.

Her theatrics are an attempt to get him to stop and cede ground - not some Karen esc entitlement. I feel for her, i really do. She didn't deserve to lose her job and livelihood over this.

Gold Member
Heh.
Some folk doubted this thread when I first created it.
Who's laughing now?

Gold Member
Cheong fell for fake news or he's authoring it himself.

That video was apparently from Barcelona during the Catalan independence "protests".

One of the problems with looting in democrat run cities is the politicians have already taken most everything
Click to expand...

And that's acting a like a child and showing a lack of consideration for others. ......Especially in a densely crowded city where open spaces are limited. There are spaces where dog owners are allowed to have their dogs off a leash. The area the guy was in is specifically not allowed because it is a sensitive wildlife area. As I have mentioned above, I don't live in NYC but run into the same situation in my city - and the response you just exhibited is what I get when I ask people to obey the law when their dogs are obstructing pathways, jumping on people, etc. So you respond to me like that, what am I supposed to do? What if I kick your dog out the way? Then you'll get mad at me?

I have also mentioned that dog owners are no longer masculine its now some bizarre form of narcissistic therapy for a lot of people, taking their 'emotional comfort pets' on planes, in restaurants,refusing to restrain them when they are barking, disrupting and jumping on other people..


Edit
Kek.
Are they simply throwing everything against the wall now, to see what sticks...?

honestly a little schadenfreude for all those virtue signalling corporations. Really not shedding a tear about Target. The inability for cucked politicians to put it down is stunning - I am convinced its because of marching orders from globalists.
Share:
Twitter Email Share Link
Top