She's not entirely wrong. The First Amendment was a mistake, because it enabled people like her to spread their poison. (I'm not even sure what that means).

One reason why I'll never have any inclination to ever visit Las Vegas again.

To walk past the most wretched homeless* I've ever seen & to then look up at the tall casinos / hotels knowing full well, the amount of money being frivolously wasted on vices...


*Not to criticize them. Just that of all the homeless I've ever seen. The LV homeless were the most downtrodden & wretched looking.

Black dude kicked off plane for lowering his mask to eat peanuts. Clown agenda might be getting worse, fellas. kel said:
Good point. It's just pure inversion of the masculine and feminine, the myth simply appropriated and lazily upended.
Click to expand...

That video on subversion pretty much sums up this inversion. Like a parasite it must invert and upend formerly healthy narratives.

Yet it requires said original narratives to exist.

US Globohomo. I really would wish Trump admin would stop the homosexual colonialism.
E

ItalianStallion9 said:
Black dude kicked off plane for lowering his mask to eat peanuts. Clown agenda might be getting worse, fellas.

This is the same woman who advocated throwing out objective standards for firefighter tests because too many working class white guys benefited from being the sons or firefighters - a brief read of her bio shows she is a huge beneficiary of ethnic nepotism and networking and her father was a lawyer and her grandfather was a judge. The hypocrisy of these people is mind numbing.

The family is one of the most notorious Jewish law families - made a ton of money liquidating Japanese American assets during WWII, close connections to jewish crime families (not mentioned in Wiki) and her father advocated the first wave of 'let blacks off' laws that created the crime wave of the 60s and 70s which was really the assertion of Jewish power and driving out remaining wasp and ethnic white power from cities.

In short her whole story can be summed up: Every. Single. Time.
A

Dont they have any RPGs left in that country? Damn...put em to use.

Gold Member
As as been noted in the past.

Small team of engineers create amazing product.
Have no experience nor expertise in marketing & sales.
Develop company featuring their small engineering department & a marketing department.
Eventually, the core engineers are pushed aside as the marketing, sales & HR Clowns take over, thinking that they know better than the men who created both product & company.

Gold Member
Ugh...
From holding off the Soviets to this... 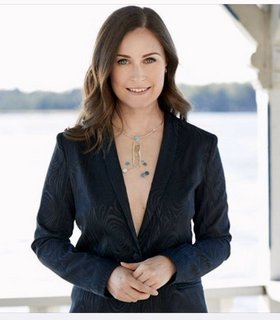 A plunging black neckline worn by Finnish Prime Minister Sanna Marin in her latest photo shoot has sparked an outpouring of support on social media.

A popular ad agency has released an animated feminist ad. It features women and some men destroying Trump's border wall by twerking at it. The message of the ad is to "move your butt" to vote and "save our democracy." They also deflate Trump by twerking at him. This agency is most known for creating Nike's "Just Do It" slogan.

What's with Netflix and interracial relationships?

I started two Netflix productions this week only to stop watching when there was a black man dating a white woman. In fact, in the first instance the black man was in bed with the white woman in the opening shot. There are many other examples of this on Netflix.

The only thing I have a problem with here is the fact it's being consciously pushed by liberals for some reason.

I don't get what they're trying to advocate for. It's never an Indian/Chinese combo or White/Inidian or Asian/White (which would actually be statistically more relevant). It's always a black man dating a white woman - or occasionally a black woman dating a white man.

This kind of interracial pairing in Europe and America is so statistically rare. It is obviously not a decision made by the filmmakers but instead Netflix corporate policy. But why? What goes through the head of someone at the highest levels of Netflix to demand the love interest of a white female character must be black. What is the reasoning?
E