eljeffster said:
He can get all the female nurturing he needs with long term hired help.

Far less expensive then getting any woman pregnant.
Click to expand...

I agree, but a test tube and a hired nanny are NOT a substitute for a mother. Does Leo want to be a father AND a mother? I doubt it. It's sick that women can use kids as cash crops now, but Leo's constraint isn't money. Instead, his game should be what Tom Brady did: Find the hottest tallest smartest supermodel and pass along his genes. Heck, if Brady and Giselle have a daughter, Leo should tap THAT ass in 18 years and create a race of genetically perfect athlete-model-actors...:huh:

Rohrbach? Is that German or Dutch?


Pride male said:
Cristiano Ronaldo impregnated a girl, paid her off and took his kid to raise himself. Was that alpha?
Click to expand...

More smart. That one time payoff would of been cheaper then her bleeding funds from him perpetually for 18 years, plus he gets custody and can raise the kid how he wants without her meddling and using the kid as a pawn.

Leo must really be master of the pull out. All these skinny hoes and and not one got pregnant. Dude must have a kid running around somewhere or he is shooting blanks.
A

Leo is playing his cards perfectly. I wouldn't change a thing if I was in his position. Dude gets to bone chicks who are hotter than a Puerto Rican picnic all while making box office magic year in year out. The only way he can go wrong at this point is getting married to any of these chicks.
P


Pride male said:
Leo must really be master of the pull out. All these skinny hoes and and not one got pregnant. Dude must have a kid running around somewhere or he is shooting blanks.
Click to expand...

Or has taken, shall we say, the kindest cut of all. But even then the guy must have Dr Strange as his physician if he isn't a petri dish of communicable diseases right now.

Reviving a dead thread. I saw supposedly recent picuture of the guy and Leo was looking rough. It made me wonder what the forum thinks about the man. In any case, a few years later and not much has changed. He could have low sperm morphology and be a master of the pullout.

I thought he looked rough a few years ago, wearing a scraggly beard at the beach with about 10 bikini beauties. However, the beard was for a movie role.

I looked up a 2018 picture. He was at a party, and Oprah was there and didn't recognize him in a baseball cap. However, his face was smooth, and his belly was flat. I think he's moving into middle aged actor territory like Harrison Ford or Eastwood did in their day. He'll be pulling 20 yr old hotties as long as he wants.

Worrying about another man's sexual options?

OP is truly a faggot.

If he wants kids just hire an army of surrogates and go to town along with a battalion of nannies. He can afford that better than he can one wife.

His best option is to find a small-town girl and marry her. They have much better attitudes and values. He should also find one young who has barely been to college.

Were it me, I'd find a country girl with top notch genetics and traditional parents, and I'd buy/build a solid home where she lived before getting her pregnant immediately.

Having her parents present all the time to help with the kid(s) would keep her head on straight about not fucking around while I was away.

I'd also start donating to various causes around town in order to create a protective barrier of good-will. Nobody gives a shit about protecting the new guy's interests until he's funding all the little-league teams in the area, at which point people start getting keen on making sure he doesn't have a reason to leave.

I bet he got assraped by producers back in the basketball diaries days.

Something tells me we're debating what Leo should do more than he is debating it himself. He's probably busy banging right now while guys are on here crying & stressing out over whether or not he should get married. LOL!

OK, jokes aside, it's really up to him. As others here stated, the only thing left is to pass on his legacy via offspring (at least one). I guess there are various ways of doing that. Maybe it's not that important to him, who knows. He should consult with guys like Michael Jordan, Derek Jeter or Tom Brady if he does plan on settling down. Maybe Al Pacino for someone in the Hollywood world that was sort of once in his shoes (just not a huge partier).

LD is an aspiration among many others including, but not limited to Hugh Hefner and Dan Bilzerian.

If you're a man, it's also worth it to be a man, or the man, in every way possible
M

So Leo's game has reached a new level.

Modeling agencies will actually PAY him to go on dates with up and coming models. They do this to guerrilla market the model because paparrazi will snap photos and tabloids will headline "Who is Leo's new gf? Buy now to meet _____"

Someone pay me to date hotties please!

Leo's going to have bulletproof SMV well into his sixties. Can't put my finger on why, but on top of his charisma, he has a natural internal vitality that women respond to even when he looks like a beer-swilling drifter. Some of that flame of youth will never escape him.

One might even theorize he possesses it precisely because he hasn't ever married.

By the way, I just saw this story. Two things: one, Tarantino can be all over the place sometimes, but this one sounds pretty solid. Two, the amount of young pussy these two are going to shred between takes will probably have to be written in exponential notation. 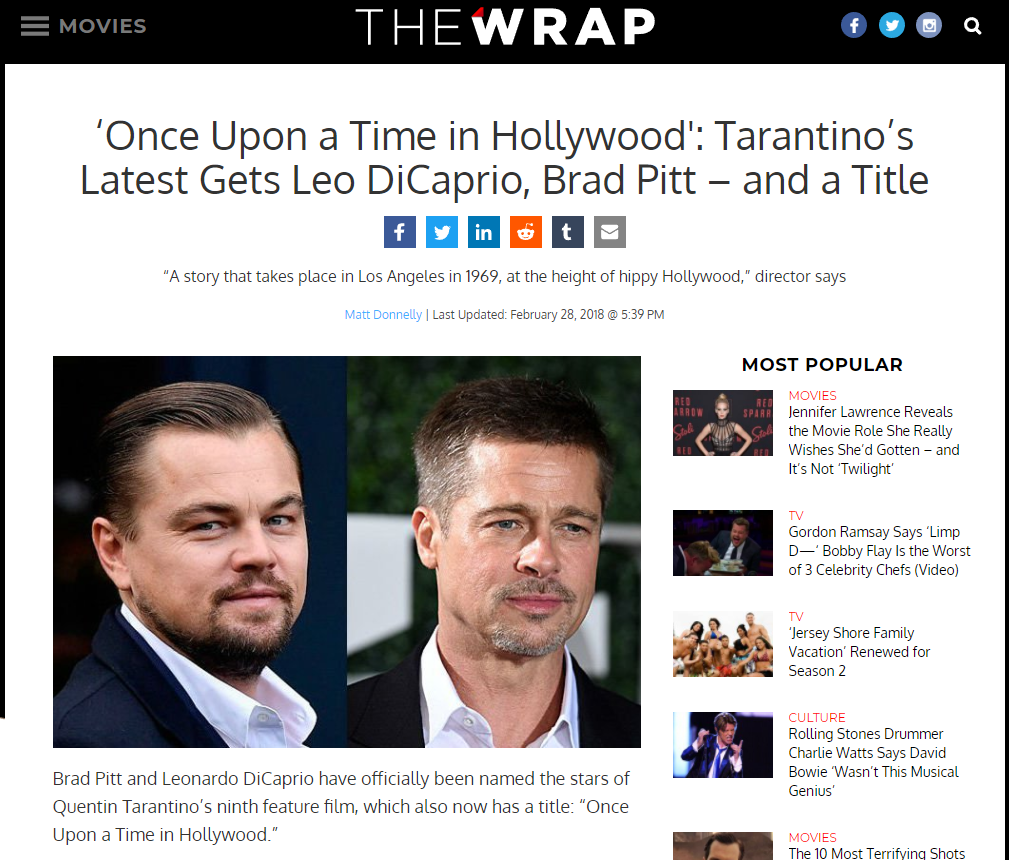 So I see the old boy, still unwed, is back in the news for shacking up with a 21 year old and having a little go with her in France. Comments are awesome. 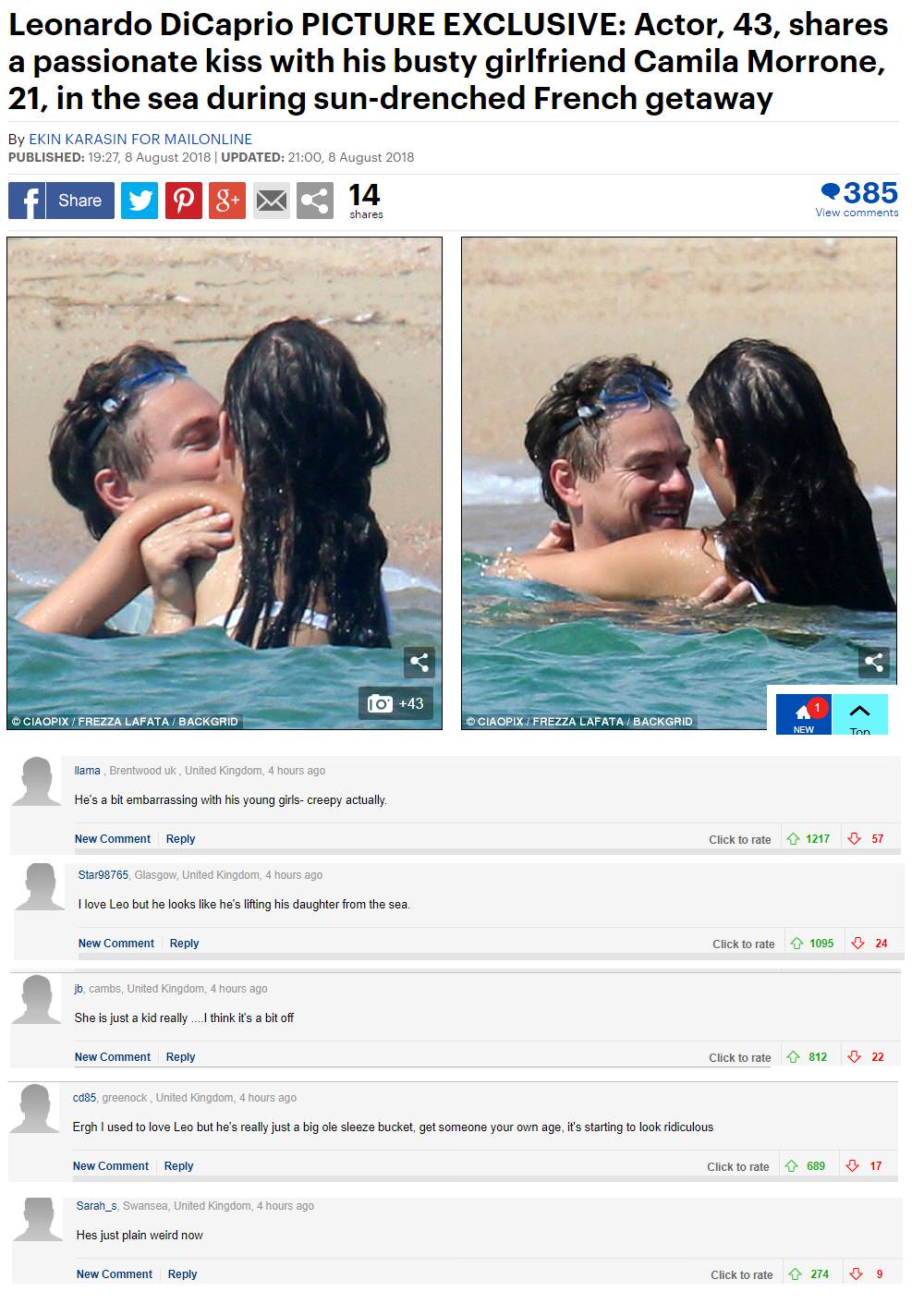 
HankMoody said:
Here is the general logic of most men - "marry the hottest girl who is willing to sleep with you to lock her down."

The reality is most hot women are used to men fawning over them, handing them everything, and generally kissing their asses. Marriage, and having kids, actually requires things like "sacrifice" and "commitment." Not posting selfies on Facebook 50 times a day, getting off the cock carousel, and staying in on Friday night. Perhaps even shutting down the Tinder and OkCupid accounts.

Assuming you want a family, the only reason to marry a woman is because she is truly committed to being a wife and mother. Most women aren't.
Click to expand...

I wouldn't have kids with a supermodel in a million years. Then you spend the rest of your life watching her fuck up the kids that you love, knowing that you fucked up, that you can't prevent it. When a man has kids, he loves them like no woman can. Fathers are much more intense than mothers, they watch their kids like their greatest creation. But the mother of course runs the show. So if you pick an idiot, a loser, a crazy, or a narcissistic bitch, you will endure regret like you never felt. Every single memory of screwing supermodels will turn to ash in your mouth.

You marry a good woman who is plain, nice, strong, and maybe even religious. She is the mother of your children, more important than mere sex. That's what Leo will do if he's smart.
Share:
Twitter Email Share Link
Top