Even the movie 'Idiocracy' didn't predict this.
G

They always whine about violence against trannies, when we all know they almost always bring violence upon themselves due to their deranged, predatory behaviour. A local one here was killed recently, 4 am by a gentleman caller. Zim was known to play the tranny trap game in the past, so I have no doubt Zim got lost that dangerous game.
N

Gimlet said:
They always whine about violence against trannies, when we all know they almost always bring violence upon themselves due to their deranged, predatory behavior. A local one here was killed recently, 4 am by a gentleman caller. Zim was known to play the tranny trap game in the past, so I have no doubt Zim got lost that dangerous game.
Click to expand...

I was debating this with a co-worker recently as we had received literature on the topic. Unfortunately, you have to do your own math as the narrative falls apart if real numbers are published. The approximate murder rate for the US last year was 6.9 per 100k. The number of trannies killed in 2021 was 57 per leftist sources, the number of trannies in the US is 1.6 million, again from leftist sources. This puts the tranny murder rate at 3.5 per 100k. So, trannies are murdered at about half the national rate. The leftist rebuttal is that police mess up in taking the murder reports, which is possible to some degree, but the UCR now tracks hate crimes, so there is nothing to suggest that number of tranny murders is drastically off.

Of course, over 90% of the trannies murdered last year were minorities. Even if you control for murder rate by race, the number of black trannies murdered is still below the national average for blacks. Given the prevalence of prostitution and drug addiction among them, you'd expect even more to be killed through lifestyle risk factors. The white tranny murder rate is approximately 0.25 which means they are the safest population in the world.

I'd suggest that the professor above, visit the "maga country" that is Chiraq and explain to the nice johns how to handle their next unfortunate experience.

Orthodox Inquirer
PHD = Persistent Heavy Delusion. The more you're educated in lies, the stupider you are.

I was hoping this was satire, but of course it is real:

Science is apparently racist and misogynist and, of course, homophobic.

MartyMcFly said:
I was hoping this was satire, but of course it is real:

Science is apparently racist and misogynist and, of course, homophobic.

Satire is a good way to look at the clown world, to remain mentally sane .

Other Christian
Maybe we can placate the LGBT mob by blasting Ricky Martin into space.

Viktor Zeegelaar said:
PHD = Persistent Heavy Delusion. The more you're educated in lies, the stupider you are.

By the way, it is possible that Ann Lesby PhD is a parody account. Because in reverse it reads as Lesby Ann

Viktor Zeegelaar said:
Satire is a good way to look at the clown world, to remain mentally sane .
Click to expand...

The goon squad pining for a name change is led by a woman named Dr. Chanda Prescod-Weinstein.
Click to expand...

Reminds me of my recent quote

MartyMcFly said:
I just read this disturbing article. I hope this survey doesn't accurately reflect what the whole country thinks. What do homosexuals want to feel satisfied? Do they need companies to openly show gay pornography in their ads? Perhaps they will demand the CEO openly show his allegiance to the cause by performing sodomy on stage during an all-employee meeting. This sounds twisted, but one wonders exactly how far things have to go before homos will stop complaining and say 'thank you, you are truly an ally to our cult.'
Click to expand...

Yes, LGBT is a cult. They have their own beliefs, practices, rituals, parades, festival days, and even "priests". 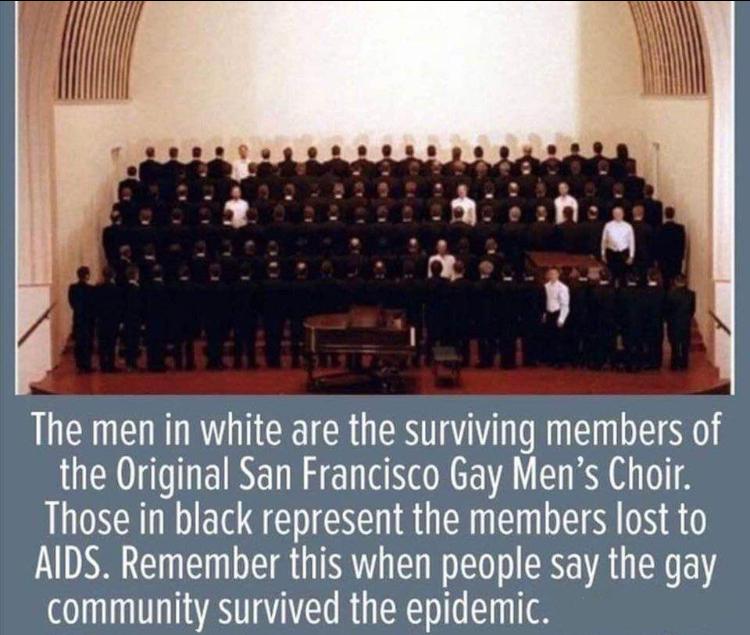 Does a Poignant Photo of Gay Men's Choir Show Devastating Impact of HIV/AIDS?

Since 1981, more than 300 members of the San Francisco Gay Men's Chorus have died of HIV/AIDS. And they still refuse to repent. So the destruction may be complete the next time around.

This is a must-read for everyone and everyone you know. The content is graphic, yes, but that is the point. Remind middle-of-the-road people and plaintive conservatives that want to 'accept all' that this is what they are accepting of, this degenerate behavior. Yes, straight people engage in debauchery, but not of this magnitude and not of this large percentage of the homos' sick population. Also, there is a big difference between a man or woman whoring around with multiple partners with conventional sex and whatever this is.

Understand there are moderate conservatives and Christians out there that are visually disgusted by an unfortunate homeless person who might smell of body odor, sweat, and dirt and wouldn't dare touch them much less help them even though they are in need of humanity, yet will be okay with a homosexual like this...piss-pig???...engaging with you in physical contact with a handshake, preparing your food, being in proximity with your children.

Also, as a human, it is sad to see another person so enraptured with something satanic like this poor soul is. Clearly, this is someone who is educated, can communicate type/write well, and could be an asset to society and you see he instead turns his soul over to such fetid, disgusting behavior that will condemn him to a life of suffering. God help him.
G

Over the course of 4 days this guy had sex with 20+ people and proudly drank their urine. And what is shocking to me is that he relates the story with his actual face right there... No shame at all. I guess this is where Pride gets you.
Share:
Twitter Email Share Link
Top