Gold Member
When the #SpiritCooking leaks happened a few weeks ago there was also some discussion into the multiple random instances of "pizza" being used in conversation and some possible connections to child sex rings.

Now the election is over people have started looking into it again and the interest is skyrocketing: Here's some of the alarming findings:

The odd wording in WikiLeaks emails are related to child sex: Pizza places with pedo logos right next to multiple businesses with ties to the Clintons: 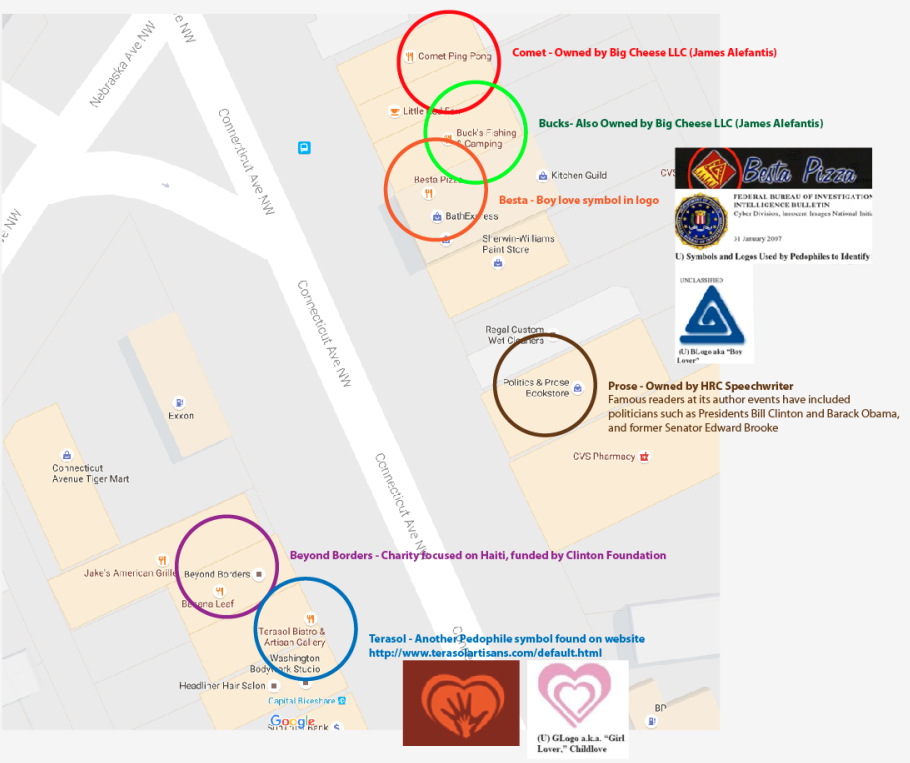 Owner of Comet Pizza:
Comet Pizza is a pizza place owned by James Alefantis (jimmycomet on Instagram), who is the former gay boyfriend of David Brock, the CEO of Correct The Record. His Instagram account is very disturbing: Lots of links for infographics and summaries which are too large to paste here:

This is huge. Someone is going to have to pay. This could also be the final strike that causes the immediate drain of the swamp.

The Clintons in prison.
Term limits getting enacted. Congress would have definitely vetoed the bill but if there's mass public outcry like this then it forces their hand.

Who even knows the global effects too, since this is unlikely to just be a US pedo ring.

EDIT: Some images were not appearing. Reports of DDoS attacks on 4chan as well. They don't want the public to know.

Unrelated, but it still ties into the disgusting and sickening pedophile network ring.

Note: I didn't include the pictures as they are too disturbing to see because RooshV Forum is about picking up hot babes and improving one's lifestyle. But we have a duty to spread the word about the elites' pedophile network ring.

Note: This article is based on police investigatory reports… personal documented testimony of enraged policemen and women. The story itself has major credibility; and the facts presented here have been corroborated by hundreds of investigators, LE and private in the USA, UK and other nations. — Preston James

This has made it almost impossible to get the truth out to the populace about the presence and penetration of this worldwide Satanic Pedophile Network.

Those editors of the major mass media and elected or appointed officials that are not part of it or compromised by it realize that to try and expose it results in an immediate loss of their job, their retirement, and they will be blacklisted and perhaps even have their lives threatened.

Notwithstanding all these strong suppression forces in the past, not only was the CIA’s Franklin Credit Union pedophile scandal exposed by the Washington Times, but the finders scandal was exposed by US News and World Report.

And, despite those highly public exposures, the Major Mass Media failed to promote those important stories; and the stories died out, with no corrective actions by federal LE, which we now know is dirty to the core, because its own leaders are fully compromised by this Pedophile Network.

Beyond Borders is owned by the Clinton Foundation??? Damnit!

After being mentioned numerous times in the Wikileaks, Shillary and Trump threads, it's good that we have this....it needed its own thread.


We need some screenshots of the relevant leaked emails.
B

I grew up about 10 blocks from that intersection.

I hope AG Sessions goes after these guys with everything the FBI's got.
S

Realistically, now that it's been shouted to the damn rooftops all over the internet, there's no chance this goes anywhere.
Any evidence has long since been buried.

It did help get Trump elected though, so it served its purpose there.
X

Oh my God, they found the ringleader! I'm disgusted with you, Mike. Did this come out via 4chan with Wikileaks? I wonder if Wikileaks even knew what they had......

I take a wait and see......thinking about the practical nature....
"A pedophile ring....
In DC...
run by Pizza restaurant owners...
some of whom are associated with a losing presidential candidate..."

seems very "conspiracy theory" to me. The change of the logo in that one restaurant seems odd though as it seems very tiny to go through the trouble.
Keep the information coming. If all true, the shutting down of Assange and the DDoS were not due to "election interference" nor "Russian agents".
G

Jack and I were kicked out of DC's comet pizza earlier this week. The owner found his periscope within 5 minutes live streaming and had the cops there so fast. Granted this all could have been avoided had we took it more seriously and went 100% covert and if Jack hadn't promoted/posted about it prior to going in.

We went to the pizza place a few doors down and there were some strange things there as well. This picture as well as a one-way mirror in the back... and cameras that faced the back of the room instead of the entrance.

The website of the wedding service advertised on the left side of that picture had a heart icon associated with pedophilia until it they changed it.

Next day reddit/4chan found this video from 2007 taken across the street from the same pizza place on the ground:


They isolated the audio which is even freakier.
https://www.reddit.com/r/The_Donald..._ping_pong_a_desperate_child_screams_help_me/
http://vocaroo.com/i/s1PgXSsHIDVL Do I want to promote a conspiracy theory? No, but all of this stuff is certainly strange and doesn't add up.
K

I want Trump to investigate all of this.

^This. If the proof gets more clear we have the right people up top who will slam the hammer on these folks.

Let me just point out that a lot of weird pictures on instagram could be explained by them being hipsters. Hipsters love to post that crap all the time.
E

The closest thing to a smoking gun is the bizarre pizza map email sent to Podesta:

"Hi John, The realtor found a handkerchief (I think it has a map that seems pizza-related. Is it yours? They can send it if you want. I know you’re busy, so feel free not to respond if it’s not yours or you don’t want it."

There is no logical way to explain that email.
E

"They [Tony Podesta & Wife] are known for purchasing "awkward" works, such as video installations, that many other private collectors will not consider. "It's easy to store them, but difficult to display them," says Podesta. To get round the problem, he and his wife have excavated a huge subterranean vault beneath their house outside Washington - a white space 5m square and 4m high in which it will be possible to show "very complicated video pieces" on all four walls."

Apparently this artwork is on display at Comet Pizza

There is a new website that is gathering a lot of information and more on #pizzagate.


Enoch said:
Apparently this artwork is on display at Comet Pizza

Even though it's "abstract" art...those images still made me really sick to my stomach.

^ There's no evidence those paintings are at those businesses.


Enoch said:
The closest thing to a smoking gun is the bizarre pizza map email sent to Podesta:

"Hi John, The realtor found a handkerchief (I think it has a map that seems pizza-related. Is it yours? They can send it if you want. I know you’re busy, so feel free not to respond if it’s not yours or you don’t want it."

There is no logical way to explain that email.
Click to expand...

Agreed. The emails are particularly incriminating because they make no sense other than as codewords:

How about this pizza chat:

Would love to get a pizza for an hour?

So Mary isn't around, and he's hungry?

And he wants to get a pizza for an hour?

I've gone for pizza in an hour, I've never had a pizza for an hour. Could be reaching, who knows.

Pizza for an hour, and then this.

"If you will be around for dinner or pizza on Sunday"
Click to expand...

Dinner or pizza? Odd, maybe nothing.

I don't even know what to think of this one, also from the Sandler Foundation. My god. I know John Podesta does cook but what are we supposed to think about this? Playing dominos on cheese? WTF??

I think you should give notice when changing strategies which have been long in place. I immediately realized something was different by the shape of the box and I contemplated who would be sending me something in the square shaped box. Lo and behold, instead of pasta and wonderful sauces, it was a lovely, tempting assortment of cheeses, Yummy. I am awaiting the return of my children and grandchildren from their holiday travels so that we can demolish them.

Ps. Do you think I’ll do better playing dominos on cheese than on pasta?"
Click to expand...

Unrelated to #Pizzagate, but still related due to cult symbols and the type of friends that the Clintons associate with.