Some of the best responses mightn't often sound that witty when put on paper, but yet you'll know in yourself when you that you handled a given situation very well.

It could be someone trying to bait you. You know how bad a situation could be if you take the bait to a certain type of question! For example, I remember seeing Jacob Rees-Mogg once getting asked by a presenter "would you describe yourself as a man of principle?"... obviously with the intention of trapping him with some follow up question. Rees-Mogg's response: "others will describe me as they see fit". Something like that, although there's no great drama to it, can actually take more sharpness than you'd think. Another example of the same thing; Ben Shapiro tries to out smart some British journalist by asking "are you an objective journalist, or an opinion journalist". The response given was "I'm a journalist that asks questions"!

What quick witted responses have you witnessed in your time? I'd like to hear them. Whether it's something you said yourself (or something that you should have said!), or something you witnessed a friend say, then share it. If it has to be something from TV, then so be it. But preverably tell me about a time in your life. Some of the best retorts wouldn't seem that good if the context of the situation and history between the people wasn't explained, so give the story too.

E.g 1. Another example of mine. There's 5 of us eating at the family table and it's pretty silent. I've had bad looking pimple on my face for a few days. My sister had previously been going on about it, and this time she says "gee, that pimple looks pretty bad, John". I responded by saying "thanks for noticing"! My father starts laughing.

E.g 2. From when I was younger - I was dealing with this bitchy manager in a factory, who was making her presence a bit too well known. On this particular day I was put working alone, so it was an easy chance for her to get in my head as she pass by my area. At one point she comes up behind me and says, rather condescendingly "and just so as you know now, you're on CCTV at all times, so everything you're recorded...". As she was labouring the point, I interrupted to say "well, we better make sure we're smiling so" and turned right around to get back on with my work. A little while later I'm making boxes, and I'm grabbing the cardboard from a pile with each card board layer facing down. The boxes I'm making are blue, but each sheet of cardboard is facing down, so I couldn't see what colour it was until I turned it over. I come to the end of the pile, so I grab the first sheet of the next pile and turn it over. It's yellow! Just at that exact point in time, she comes up behind me and says "who told you to make yellow boxes?" acting as if I was making them the whole time. I swiftly responded with "can I not turn one over to see what colour it is?". Now if those were my responses, I wouldn't be here typing this!

E.g 3. This one from a movie, The Bodyguard. I thought it was an epic response out of Kevin Costner's character: Whitney Houston's character is in the changing room (of a clothing store) conversing with Costner from outside. From over the top of the door she points to a dress and asks "could you grab me that one please?". Costner replies with "I'm here to keep you alive, not to help you shop"!

E.g 4. So I enter the store where I work in the morning just before it opens. It's quiet and there's not many staff around. I go behind the customer service desk to get something. Just as I do so, this somewhat cold trainee manager, who's pretty much refused to acknowledge my presence, comes over to ask me something. To get my attention she says my name. She says it almost like a teacher even though she's about my age. She'd done this to me before, and the way he says it makes me feel like I'm suddenly under a spell! Anyway, after she calls my name I look up and she begins saying what he wanted to say. She only said about two words before I cut off to say "Sandra, would it hurt to say good morning?". I had her then! She knew I wouldn't comply with any question she had unless she said "good morning". Ordinarily I'd look sensitive if I gave out to her for not saying hello. My leverage in this case was the fact that she came to me.
Last edited: September 24, 2020
H

When i was younger i had a friend that was going bald. A girl said something along the lines of: "losing a little hair, huh?"

Without missing so much as a beat, his response: "that's ok, you have enough hair on your ass for both of us."

The whole group male and female started howling with laughter.i recognized it at the time as a great moment, but grew to truly appreciate it in fullness a few years later when i started to go bald.

I had a zinger that I thought up and literally waited years for exactly the right moment to use: my friend's dad was from a Caribbean nation. One day we were discussing footwear and I thought to myself, "get ready, this could be the moment". He mentioned black loafers and I said without skipping a beat, "speaking of black loafers, how's your Dad?". We've been friends a long time, he had a good laugh.

More recently I slid into a parking spot, noticing at the last minute that someone else had been cutting through the parking lot to get to it. As I walked into the store, the driver of the other car (a Karen who managed to find another spot a few cars over) called to me, "you know, you took my parking spot!" I was able to answer immediately, "I'm sorry, I didn't see your name written on it", which left her stumped. It was satisfying because usually my comeback response is like George Costanza with "jerk store".

Gold Member
When I can't think of something to say, I say the same thing to everyone, male or female, in every possible situation, and it always seems to work:

Not applicable to people who are about to hit you are shoot you. 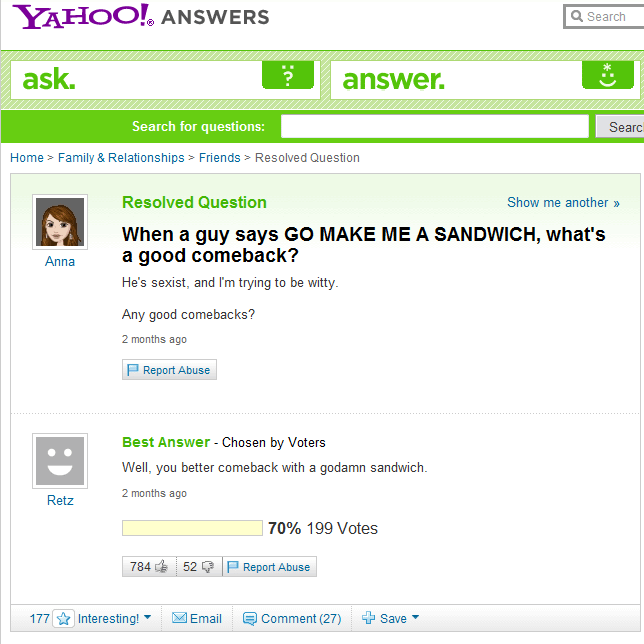 ed pluribus unum said:
I was able to answer immediately, "I'm sorry, I didn't see your name written on it", which left her stumped. It was satisfying because usually my comeback response is like George Costanza with "jerk store".
Click to expand...

Nice! For some reason I'd have went with "first come, first served".

Once when my family were walking on the beach, I had been casually throwing a few stones as I would often do. As I threw one, my sister (who was trying to get a reaction out of me) walked out in front of me (with her back to me), and said "you're not as good at the stone throwing as before" which obviously makes no sense. My response was "still good enough to hit you in the back of the head with one though"!

Just yesterday at work, this fella was standing in front of the doorway (double doors). He was talking to someone else standing elsewhere. I was coming from the other side, and both doors were closed, but I could see through the glass of the door. I presume he just stopped for a quick chat before going through the doors,. His back was turned, but I could see that if he didn't move that I'd be able to pass through easily without bumping the door into him. It was one of those moments where you'd be unsure as to whether you should make you're presence known or not. Anyway, I couldn't have been bothered! So as I passed through he turned to see what was coming, and as I walked on I heard from behind "you gave me a fright". With my back turned I replied "I meant to"!
Last edited: October 18, 2020
You must log in or register to reply here.
Share:
Twitter Email Link
Top