The Russian-Ukrainian War of 2022 (News and battle updates only)

Ember said:
With the Russian troops now withdrawn to the East bank, it makes more sense for the Russian troops to blow up the dam. That way, when the big push comes, Ukraine no longer has the option to do it to sweep away Russian pontoon bridges.
Click to expand...

Wouldn't it make sense to wait until the Ukies tried to cross the river before blowing the dam? It would make for some good social media videos, I'm sure.

I guess they want to make sure they do it while they have control.

DeWoken said:
Wouldn't it make sense to wait until the Ukies tried to cross the river before blowing the dam?
Click to expand...

The Russians have blown up the bridges. There is no way for the Ukies to cross the Dnieper other than by inflatables. I don't think they have access to pontoon bridges, but I could be wrong. If they try to cross the river, the Russians will wreck them. 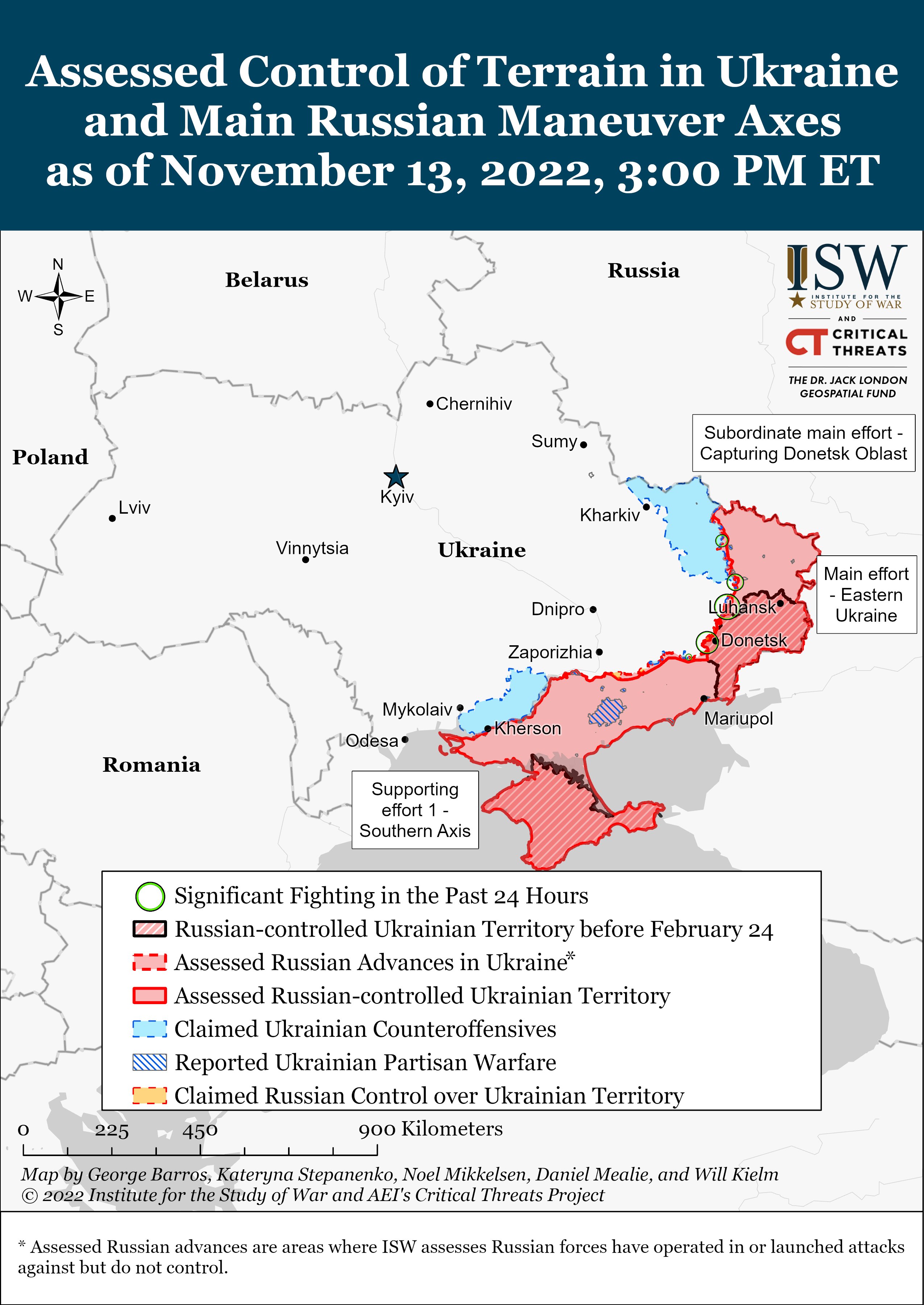 Yes, ISW is one of the most egregious propaganda outlets in existence. Their articles are often so shameless, they're simply unreadable. They cannot refrain from trying to denigrate Russians with practically every sentence they write, often with the same narratives that have painfully obviously been false since early March yet get repeated with ritual consistency. The lion's share of the citations in their articles are literally just the Ukrainian General Staff. Furthermore, their leadership are practically all top-level US national security functionaries, with careers made in the Iraq War era.
I am not telling you not to post ISW, because there can be merit in seeing what the US narrative is saying, and there's nothing wrong with trying to get multiple sides of a story, and they could even be right occasionally, but just do know who you are dealing with with ISW. This source is practically the official mouthpiece of the US military-intelligence complex.

Thanks for the tips, will use a different source for my Ukraine maps in the future.

Orthodox
Gold Member
It is worth posting an ISW map every week or so to see what USGov is thinking. 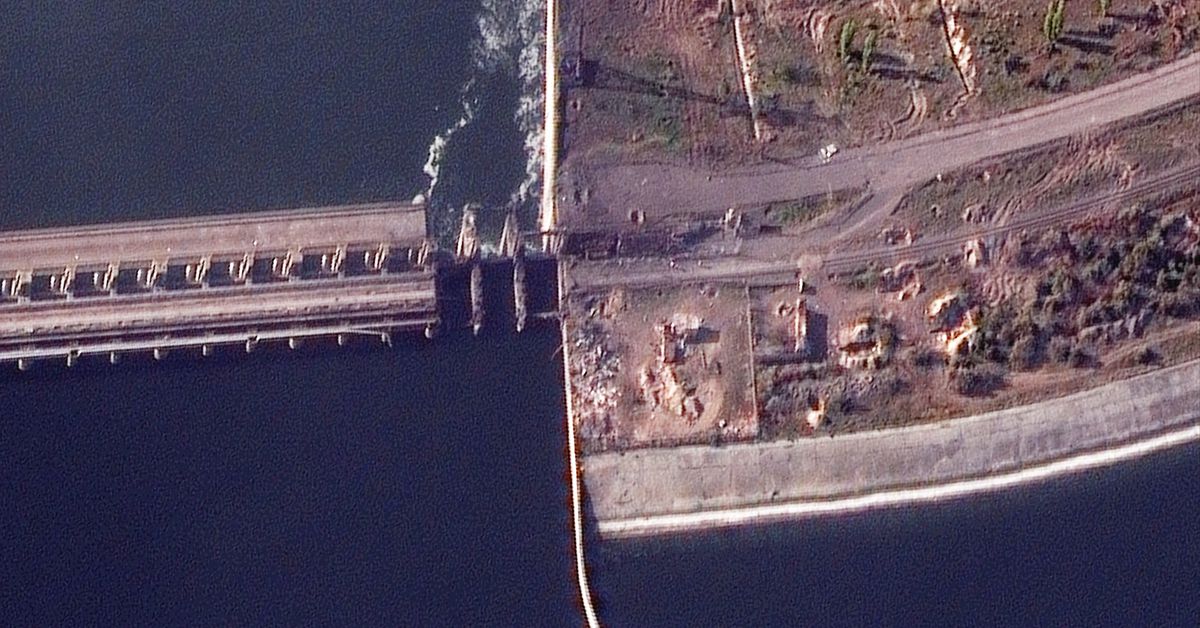 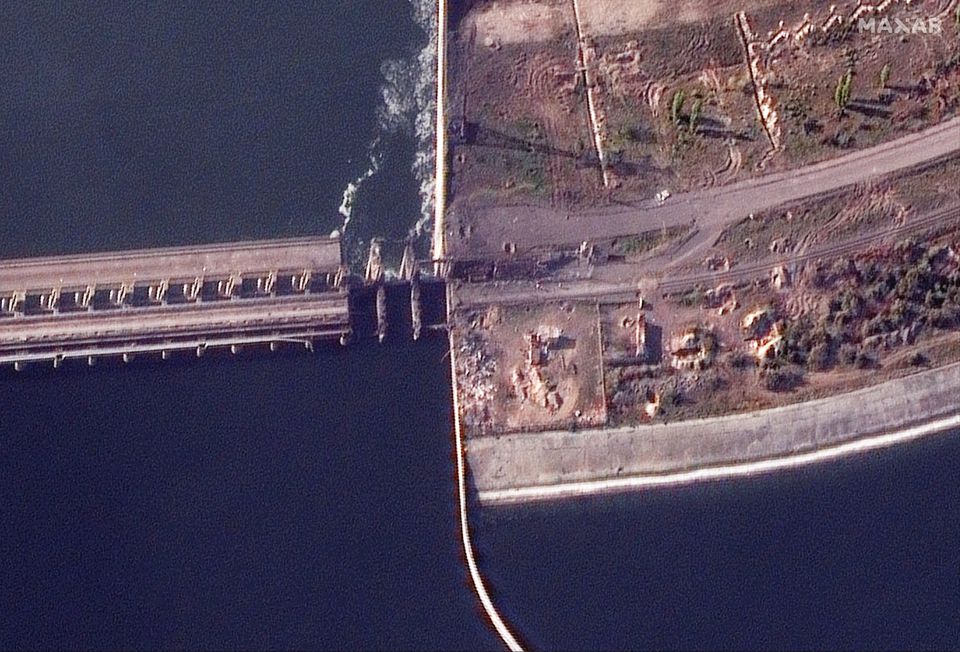 The detonation of the dam was done just enough to make it impossible for the enemy to advance. If they want to keep their side of the city from being totally flooded, Ukraine needs to repair it within a week or so? Not going to happen especially if the power grid is on the brink.

The Dniper river serves as a natural barrier in this war, I doubt anyone will try to cross it outside of winter. I've read many guesses that eventually Ukraine is partitioned along the river.
Last edited: November 15, 2022

Samseau said:
The Dniper river serves as a natural barrier in this war, I doubt anyone will try to cross it outside of winter. I've read many guesses that eventually Ukraine is partitioned along the river.
Click to expand...

If the river serves as a natural barrier then Russia still needs to conquer the whole north east of of the country.
Basically everything between Kiev and Kharkov.
Maybe that's the plan for 2023.

Here on these 2 maps you can see how the entire river clearly as it cuts through the whole of Ukraine from north to south. 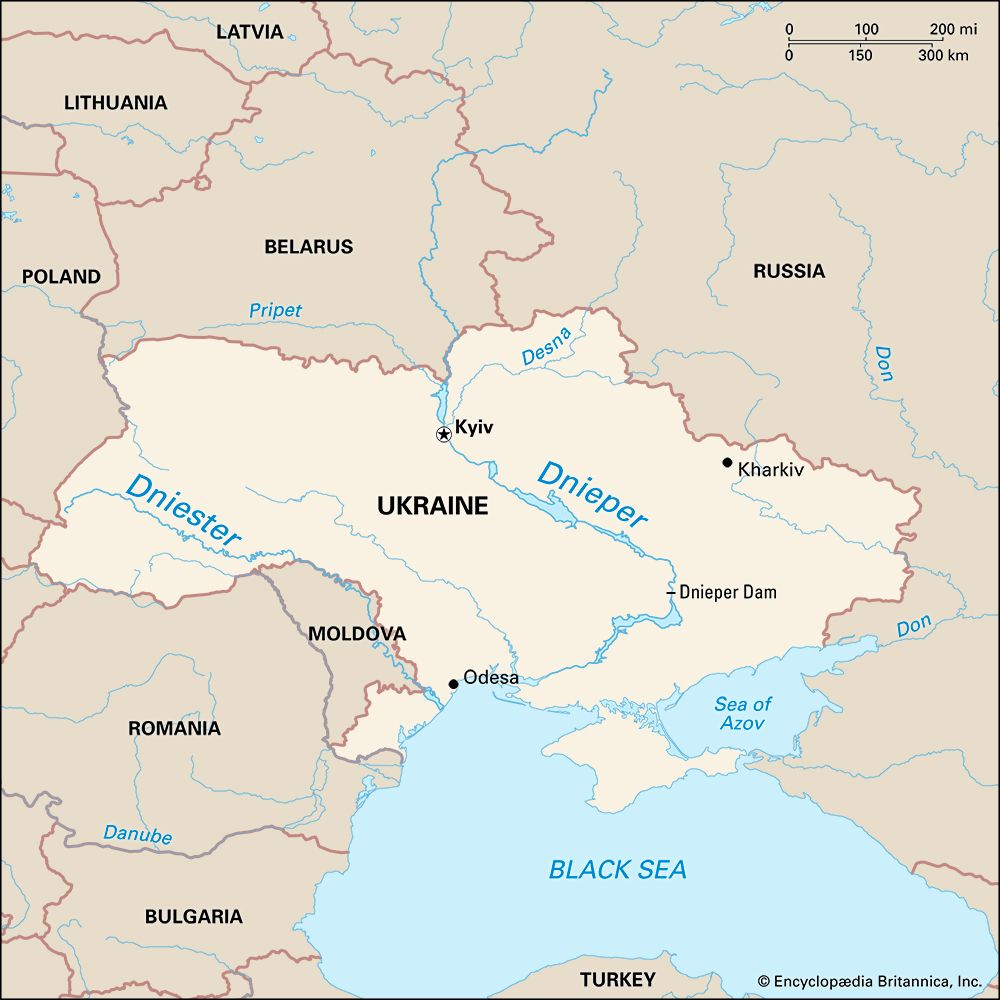 "There is a mass launch of X-101 missiles in Ukraine with Tu-95 bombers from the Volgograd-Astrakhan region. More than 40 missiles - Ukrainian media."
"Explosions are reported in Zaporozhye."
"Also reports of geran-2 drones over Ukraine."
"Ukrainian resources also write about launches from the Black Sea."
"Eyewitnesses report missiles flying over Kharkiv."
"Three rockets passed over Konotop, heading for Kiev."
"2 rockets towards Poltava from the Sumy side."
"Explosion reported in Kiev."

"Two more missiles are reported on the approach to Kiev."
"Missiles were spotted over the Poltava and Cherkasy regions."
"Information about missiles flying from Kherson region to Nikolaev."
"One of the missiles flying towards Zaporozhye changed direction and turned towards Dnepropetrovsk."
"Repeated explosions in the Kiev region."

"Explosion reported in Poltava region."
"Missiles were spotted over the Ivano-Frankovsk region."
"Explosions in Vinnitsa and Khmelnytsky regions."
"Krivoy Rog, Dnepropetrovsk region - explosions."
"A flight of several missiles over the Odessa region was observed."
"New explosions in Kiev."


"Three explosions in Kharkov."
"It is reported that light and water have disappeared in Zhytomyr."

"Energy infrastructure facilities in the Kirovograd and Vinnitsa regions were hit."
"Deputy Head of the Office of the President of Ukraine Kyrylo Tymoshenko reports that the situation with the energy infrastructure in the country is critical."
"In Kramatorsk, the power is urgently turned off due to rocket attacks throughout the country. This was reported by DTEK Donetsk Electric Grids with reference to the order of NPC Ukrenergo."
"Emergency power outages began in all regions of Ukraine after Kiev, said the mayor of the capital, Vitaliy Klitschko."


"The authorities of the Volyn region in western Ukraine reported the destruction of an energy infrastructure facility as a result of an air strike, said the head of the Volyn regional administration, Yuriy Pogulyaiko."
"Ukrainian mobile operators have limited the operation of some services in order to save electricity to be able to make calls, the mayor of Lvov said."
Edited: "Information about the missile attack on the building of the General Staff of the Armed Forces of Ukraine and the operational command has not been officially confirmed."

"There are reports of the passage of another batch of cruise missiles over the Cherkasy region towards Kiev."
"Russian kamikaze drones reported over Nikolaev."
"Traditionally, attack drones follow the cruise missiles."
"The situation with the electricity supply in Ukraine is out of control. The first frosts are expected in the coming days."
"New explosions in Kiev."
"The mayor of Lviv reports a difficult situation: 80% of the city is without electricity, the heat supply has been stopped, and electric transport is not running."

Caduceus said:
If the river serves as a natural barrier then Russia still needs to conquer the whole north east of of the country.
Basically everything between Kiev and Kharkov.
Maybe that's the plan for 2023.

Here on these 2 maps you can see how the entire river clearly as it cuts through the whole of Ukraine from north to south.

This doesn't correspond to the parts of the country with a high percentage of Russians in the population. Maps of that show that part of the area east of Kyiv is anti-Russian. On the other hand, the Russian sector crosses the river in the south going to Odessa and beyond. I don't think the river will end up being the boundary, convenient though it might from a defensive standpoint.

"A missile attack was carried out on Odessa. It is noteworthy that they flew in without declaring an air raid alert."


"According to preliminary data from the Ukrainian media, the missiles were launched from a Tu-95MS in the Volgograd region."
"In Kiev, they decided to turn off the electricity before arrival. DTEK announced an emergency shutdown."

"They report arrival in Dnepropetrovsk. There are also power outages."
"Missiles were spotted over the Kharkov, Poltava and Cherkasy regions."
"Explosions in Kharkov."
"Explosions in the Sumy region."
"Explosions are heard in the Kiev region. There were also reports of an explosion in Kiev."
"The total number of missiles fired in Ukraine at the moment is 50 - Ukrainian media."
"They announce new launches of the Caspian Flotilla."
"New explosion in Kiev."
"There is a new wave of missile strikes on Ukraine. Arrivals in Kiev, Dnepropetrovsk, Odessa, Poltava, Cherkasy."
"Air-launched Kh-101 missiles in the air. Strategic aviation is working."
"In Kryvyi Rih, communication problems are reported."
"Russian missile strikes on energy facilities - head of Zelensky's office Andriy Yermak."
"Russia launched a massive missile attack on the infrastructure of the Odessa region, Governor Maxim Marchenko said."
"Several hits on infrastructure facilities in the Dnipropetrovsk region are reported, as well as new arrivals in the Lvov region."

"Local authorities confirmed arrivals in the Lvov region."
"It is reported about the flight of two missiles over Yagotin, Kiev region."
"After new missile hits, the SBU and local Gauleiters again send out threats demanding not to film or upload videos of arrivals, trying to minimize the number of videos on the network with arrivals."

"Powerful explosion in Kiev."
"Prime Minister of Ukraine says new Russian missile strikes target gas production."
"In Odessa, an arrival at the military unit, eyewitnesses report."
"Explosions in Vinnista."
"Geran-2 over Nikolaev."
"Scheduled and emergency shutdowns are introduced throughout Ukraine - Ukrenergo."
"A strong fire occurred at an industrial enterprise in the Dnepropetrovsk region after the explosion."
"Russia is attacking the Southern Machine-Building Plant in Dnipro and gas production facilities, Prime Minister Denys Shmyhal said at the Kiev International Economic Forum. “While rockets are flying over Kiev. Now our gas production is being bombed, our enterprises in Dnipro, Yuzhmash, are being bombed,” Shmyhal said."

"Explosion in Ochakovo."
"Several arrivals in Ochakovo. It is not yet clear - Geran or Caliber."
"In Odessa, a logistics facility was hit. Struck by a Kalibr and 6 air-launched munitions."
"In the Kharkiv region, as a result of morning strikes, critical infrastructure in the Izyum district was hit. The information is confirmed by the Gauleiter of the Kharkov region."
"Mopeds continue to fly to targets, after missile strikes."
"One of the Geran kamikaze UAVs has just been spotted in the Ochakov area."
"Near Kievv in Irpen, Gostomel and a number of other areas problems with the Internet and cellular communications."
"Mobile Internet and communication partially disappeared in the Kiev region due to lack of electricity."
"In the Poltava region, emergency shutdowns are added to the hourly schedules to stabilize the voltage, local authorities report."
"Throughout the Dnepropetrovsk region, DTEK introduced emergency power outages."
"Electricity is partially cut off in Dnipro."
"The authorities of the Odessa region announced an explosion at one of the infrastructure facilities in the region."
"Explosions are also reported in Vinnitsa, Uman, Lvov."
Last edited: November 17, 2022
You must log in or register to reply here.
Share:
Twitter Email Share Link
Top