MichaelWitcoff said:
Tried to read the novel Thrawn, which is official SW canon (in comparison to the Legends books). It’s unreadable IMO and I’m not even going to finish it, will read the final two Legends Thrawn books instead. Somewhere between Legends and Canon, Timothy Zahn appears to have lost his touch as a writer.
Click to expand...

He probably had to try to fit it in with the terrible show Rebels, and was constrained by the comics and lucasfilm. I would hate to have to change a character I created to fit into a SJW universe (unless its an over the top masculine character).

Orthodox
It wasn’t the story that made it unreadable, it was the writing quality. Maybe he used a ghost writer because I don’t know how else to explain the difference between the Legends and Canon books.
M

CynicalContrarian said:
I recall in one of the much earlier Warhammer novels - circa 1995.
Written by a guy by the name of Jack Yeovil if I recall correctly.

The notion of the aging actress, always being replaced by the younger more vibrant girl, only for the cycle to repeat itself ~20 years later.

A good 'red-pill' notion on the nature of aging female beauty way back in ~'95.

Edit.
Looks to be the novel - Genevieve Undead from '93 :

The final season of Clone Wars started today. The opening message line used to just be inspiring quotes like:

Great leaders inspire greatness in others.
The best confidence builder is experience.
When surrounded by war, one must eventually choose a side.
Humility is the only defense against humiliation.

Now it has a suspiciously woke message:

Embrace others for their differences, for that makes you whole.

Star Wars Clone wars wasn't much of a cartoon for kids at times. Real Lucasfilm mapped out season 7 - there are even rumors of previously completed episodes that were later axxed by Disney.

The SJW characters of stronk inependent super-wahmen with shitty lesbo-SJW haircuts will show up soon enough. Even Rebels already got a drink of the stupid and SJW booze.


You can even recognize visually the shitty new characters added.

Star Wars recently announced that they are planning on letting a black diversity director hire film a movie about the shitty Final Order of the Emperor.


JD Dillard is a writer/director with very questionable talent and skill-set who produced 2 minor shitty agenda-blasted movies, so I guess that he is perfect for Disney Star Wars.

Disney will still do fine because the useless eaters flock to their other movies like re-imagined and worse versions of Lion King or Aladdin. And their re-imagined Beauty and the Beast can be stuffed full with wise black librarians in the 16th century while of course Mulan has to be 100% Asian or it would be racist. Fuck Disney.

They make their dough that way while Star Wars will continue to tank.

In the trailer of the new cartoon where they try to save the Star Wars franchise you see a bunch of clear diversity hires and very obvious white male feminists and SJWs like Pablo Hidalgo.

Diversity on the board is written multiple times, so it's clear what can be expected.

Their biggest issue is that the kids are not into it. The average Star Trek fan is in his 40s and male. The average Star Wars fan who actually wants to spend some money only slightly younger due to the success of the Prequels as well as Clone Wars and games.

But that is gone - people say who rewatched the Original Trilogy - that the movie leaves a bad taste in their mouth. The reason is simple:

When you know that Luke Skywalker will end up as a cowardly hobo suckling down on green-titty milk and dies like a fart in the wind, then you don't want to see his early adventures. You imagine him to have recreated the Jedi order, become a great-badass, not end up a childless bearded weirdo on some island while the galaxy has turned back to shit.

All of this is just simple Western myth destruction. The social justice sheisters would actually prefer to create new propaganda stories, but the problem is that agenda automatically creates bad storytelling. It does not even resonate for the SJWs who simply like to see their shitty kisses and ignore everything else. For example - the Reylo SJW fans are behaving like women depicting the old Manosphere trope of women being infatuated with serial killers/bad boys/murderers. "I know that I can save him!" So him dying is obviously not how they would have wanted this to end.

Either way - the Western vandals will not be satisfied until everything is destroyed in the West - the nation, the art, the myths, the history and their perception, the language and then in the end the economy and the architecture.
D

Thankfully they at least made the Lord of the Rings trilogy when they did. Its likely too expensive of an investment to be considered for a remake with a gay love scene and transgender elves.

They don't need to conform to the oppressively gauche gendernormative social regimes of the kingdoms of man.

< The woke version of the Lord of the Rings TV series is already in production. No myths will remain as they are. Everything has to be pulled down and destroyed. It's supposedly very expensive and you will be happy to find out that there are multiple black actors cast - bigot!

When they did a prequel to Game of Thrones they gender- and race-swapped entire tribes, made it SJW central and the series was canned after the pilot. They did not even dare release the pilot. It must have tested so badly that everyone hated it. It would have likely destroyed the franchise even more than those bozos did.
C

Not to expose my inner nerd too much, but that board in the video also said they wanted more of the Sith Empire. There was no Sith Empire 200 before A New Hope. Not only are the writers SJW hacks, but they also don't know SW.

Captainstabbin said:
Not to expose my inner nerd too much, but that board in the video also said they wanted more of the Sith Empire. There was no Sith Empire 200 before A New Hope. Not only are the writers SJW hacks, but they also don't know SW.
Click to expand...

Many sources confirming now, live on FOX too.
He's not CEO anymore though, and is leaving earlier than his contract says he should.
>>8246640

Gold Member
Every time a CEO resigns these days its given as proof positive that they're running from Trump's imaginary future gulag.

Leonard D Neubache said:
Every time a CEO resigns these days its given as proof positive that they're running from Trump's imaginary future gulag.

Maybe it's the coronavirus wiping out the social justice command and writing team at Disney. But they would just rehire new apparatchniks.

The new Disney series will be just fine:

You can read through the tweets of the so-called story-team - scores and scores of tweets of hatred against Whites, against Christianity, Western culture in general. If they think that it's so bad, why don't they move to one of diverse utopias out there - guess the White man ruined Somalia, Haiti, Venezuela and Brazil for them or those places would be paradises on earth.

It's really amazing. It appears that they hire their staff going through a checklist:

+ Do you hate White people?
+ HOw much - wipe them all out?
+ Hate all of Western culture?
+ Want to replace it all with Bolshevik anti-White anti-Western anti-male agenda?

If you are on board with all of that, then you get hired - marginal job experience or skill is enough. They recently hired some female documentary film maker for a Marvel movie as a director. That woman had done 2 small documentaries and now she gets a 70 mio. $ blockbuster. All you have to be is female and a Bolshevik.

Simeon_Strangelight said:
< The woke version of the Lord of the Rings TV series is already in production. No myths will remain as they are. Everything has to be pulled down and destroyed. It's supposedly very expensive and you will be happy to find out that there are multiple black actors cast - bigot!

When they did a prequel to Game of Thrones they gender- and race-swapped entire tribes, made it SJW central and the series was canned after the pilot. They did not even dare release the pilot. It must have tested so badly that everyone hated it. It would have likely destroyed the franchise even more than those bozos did.
Click to expand...

Fallen Order was created out-of-house by a team that had little to no contact with the Bolsheviks at Disney. They side-stepped the narrative by adding a few black actors and casting the main hero with an open gay actor alleging thus that the Jedi trainee is gay himself.

But obviously when you don't make it a point, then it does not matter just as Star Trek had black and female captains in the 1990s and Marvel comics was led by black female characters and no one cared. No one cared because the story was the main aspect and it did not go into social justice agenda. The captain or hero was just that - happened only to be black or female.

Captainstabbin said:
Now it has a suspiciously woke message:

Embrace others for their differences, for that makes you whole.
Click to expand...

Sometimes amazing eloquence and articulation and "education" doesn't get across the point that a 12 year old does with ease: 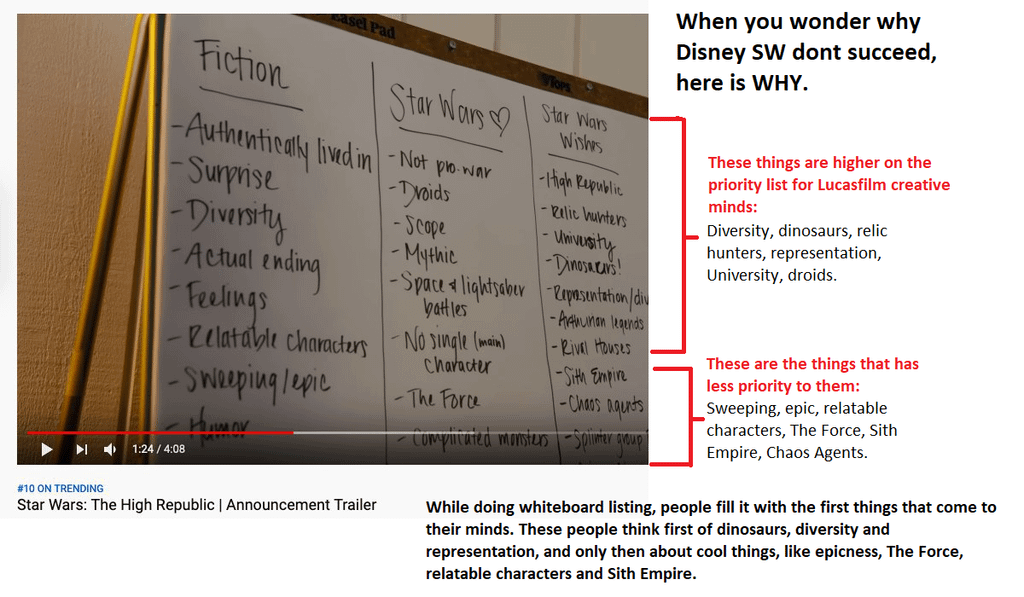 The term Rival Houses likely came from the SJW retards having watched Game of Thrones (Slayqueen yes!) and wenting to replicate the stories from there. But similarly to the 2 inept bozos who destroyed it - it neither fits Star Wars, nor can it have any of the murderous GOT impact that would be necessary. But don't let this stop the snowflakes there from trying to push it. And they put university up because "education" (=state mandated diversity/inclusing/anti-Whiteness propaganda is where they got all their shitty mental cancer from) is what they want to push on the people. Star Wars clearly similar to Marvel comics is just a political "education" (=reprogramming) tool that they don't even like. It's the same with Marvel comics that the sheisters don't even read because the stories and characters are shit. The morons likely read manga where the girls are still girls and the men more or less men while the storypoints are intact.

7. Shitty fan-service so that the useless eaters go watch it

15. Story.... what story .... just throw some shit on the wall, the morons won't remember what happened 10 minutes later or why this or that point does not make sense - the idiots will gobble up any crap that has a laser sword in it.

It's interesting that the current ilk of cultural marxists after a time CANNOT EVEN CREATE A GOOD STORY. The reason is that all this moral relativism, all this idiotic feminism, anti-White agenda, anti-male agenda, anti-Western history agenda - it destroys anything that can be made. Add to it that they have to hire incompetent morons who have the right political affiliations first, then it's the death knell. Jar Jar Abrams is part of this as well - correct tribe, babysat Spielberg's kids, threw the pussy-grabbing more testosterone-filled part of the Hollywood makers under the bus to grab their turf, unfortunately always had lousy stories clad in stupid gimmicks and some good visuals.