Blade Runner said:
As I finally brought myself to watch the Rise of Soywalker, I immediately thought two things. The first 15 minutes was at least an entire movie or two fast forwarded. Then I kept watching and it was ok, of course compared to the filth produced in Episodes 7 and 8, the worst of them all. It then reminded me of Game of Thrones, and I began to think, what was the most disappointing? I think the later seasons of Thrones, especially the last season (obviously) were so awful that that series in fact was the biggest disappointment of all time. And it's not even close. I cringe to think of how bad that last season truly was, especially given the huge (1.5 year?) break; it's almost funny how quickly I want to erase that entire thing from my mind. Both productions are amazing in that they really show you how good the Lucas Star Wars prequels truly were. I know that'll get people going, but it proves the whole thing is a hoot!

Billions have been spent marketing crap that is both brainless and forgettable, popcorn experiences that can't hold up to the scrutiny of even a single passive viewing.

And they're utterly lacking in basic humanity, with fuck all to say about the profundity of the human experience beyond a glib superficial level.
In 20 years, no one will be watching "The Rise of Skywalker" but people will still be watching old episodes of Firefly along with the film Serenity. Hell, they are!

Battlestar Galactica too, Luke Skywalker's struggle in The Last Jedi could have been this, imagine Hamill coping, getting played by the young Adam Driver:

budoslavic said:
Bumping this thread back up. Disney is back in the news.

A new “Star Wars” series is in the works at Disney Plus, Variety has learned from sources. The series hails from Leslye Headland, the co-creator, showrunner, and executive producer of the critically-acclaimed Netflix series “Russian Doll.”

Details of the exact plot of the series are being kept under wraps, but sources say it will be a female-centric series that takes place in a different part of the “Star Wars” timeline than other projects. Headland is said to be attached to write and serve as showrunner on the series, with the show currently staffing.

Reps for Disney and Headland did not immediately respond to Variety’s request for comment.

Headland also directed multiple episodes of “Russian Doll.” The show was nominated for 13 Emmy Awards for its first season, ultimately winning three. Headland began her career writing and directing the “Seven Deadly Plays” series, which includes “Bachelorette” and “Assistance.” “Bachelorette” was the basis for her directorial film debut starring Kirsten Dunst. Her other film credits include writing the 2014 remake of “About Last Night” and writing and directing “Sleeping with Other People.” Besides “Russian Doll,” her other TV credits include “Terriers,” “Blunt Talk,” “SMILF,” and “Black Monday.” She is currently under an overall deal at Fox 21 Television Studios, with the studio now under the Disney umbrella.

News of the new series development comes after Variety exclusively reported that a third season of “The Mandalorian” is already in the works at Disney Plus ahead of the second season premiere later this year. “The Mandalorian,” one of the launch titles for the Disney-branded streamer, proved to be a major hit and pop culture phenomenon upon its release.

There are currently two other live-action “Star Wars” shows in the pipeline at Disney Plus — an Obi-Wan Kenobi series starring Ewan McGregor and a Cassian Andor/”Rogue One” prequel series starring Diego Luna. Variety exclusively reported that Joby Harold had recently joined the Obi-Wan series as the writer, while Stellan Skarsgard and Kyle Soller recently joined the Cassian Andor series.
Click to expand...

I stopped reading after "female-centric series...". 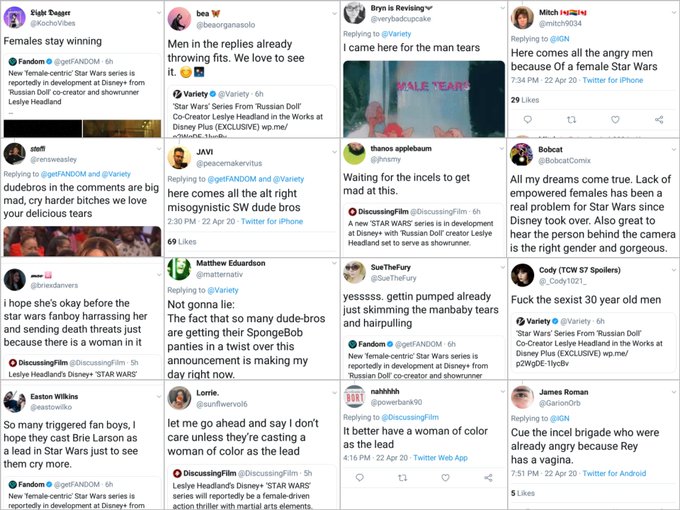 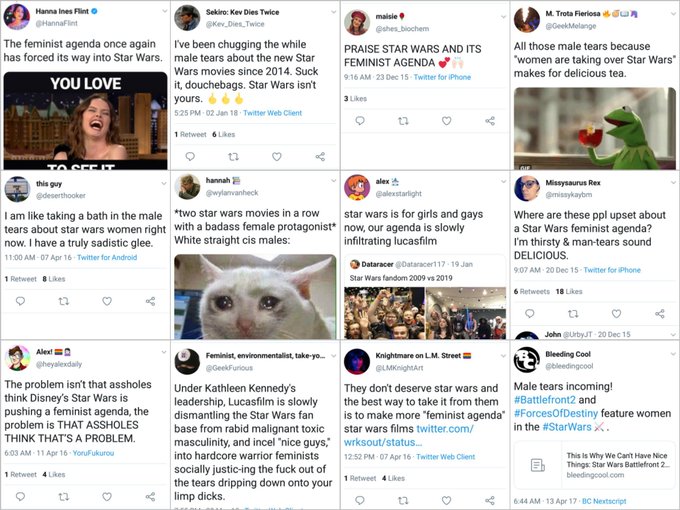 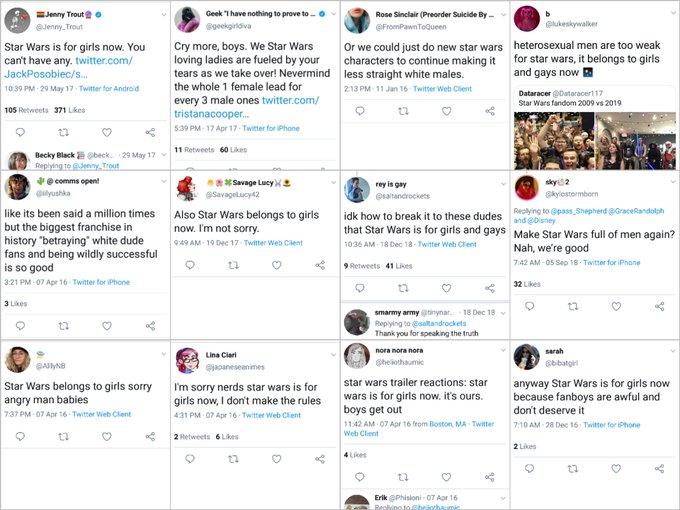 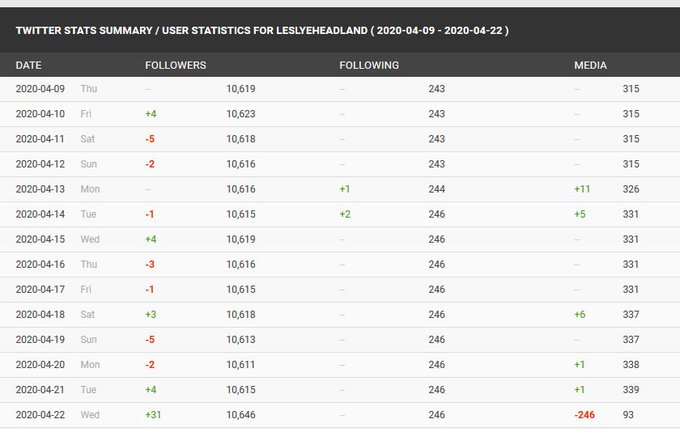 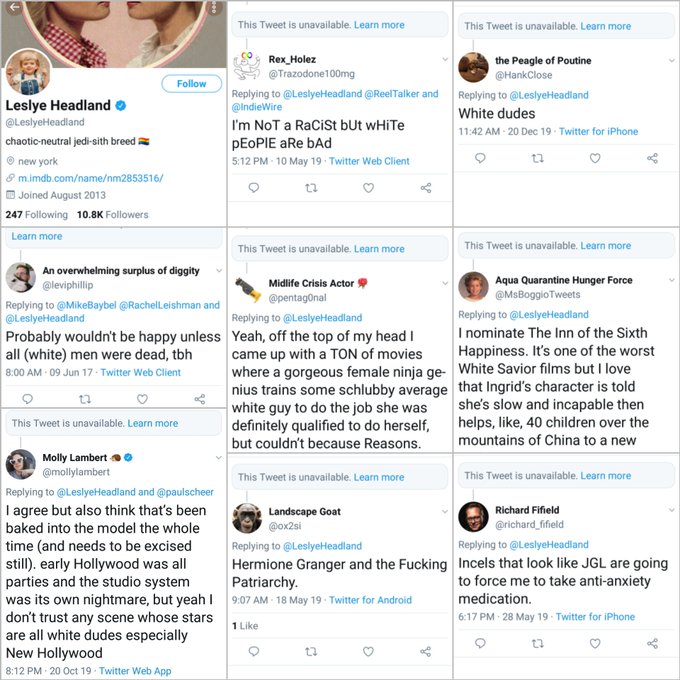 What strikes me about the tweets above, the first tranche with all the male tears etc (I didn't have time or the stomach to read the second batch), is the smack-face obvious insecurity of all these people. Looks like they're all women, so, all these women.

Its pathetic. It really is.

Because these women aren't really fans of shat wars and in another time without social engineering they'd could care less about this. But because of present day feminism and its infiltration into education, a la women's "studies", that cultivates hysteria over things like "female leads" etc and the jealousy of men, we have this population of harpies. I get the impression that none of the women above really care too much to even watch the movie. All these tweets and their chance to stick it back to men is the drama they seek.

I step back and ask...what kind of person is this. What are their motivations and what is the content of their character. To wish for the sufferings of others and with gusto, as you can clearly see above, IS the content of these people (women) souls. And we should judge accordingly.

This sort of triumphism we observe is also peculiar and equally peculiar in being pathetic. They speak as though women have taken over shart wars as if they literally duked it out in the very space battles portrayed in these fictional movies.

Again, there is something very pathetic about all this. Because, as we know, there were no massive battles, there were no major wars. There was the whining, complaining and crying, which got these women what they wanted. And a developed, legitimate, "hero" character is no whiner.

Moreover, similar to affirmative action, the placement of these characters is just as arbitrary.

And now that women have taken over shart wars they've destroyed the franchise and will continue to destroy it with every new fat, undeserving, slow, pathetic "female lead" they introduce.
A

Just in time for Star Wars day....something no RVF'er should be without!

Can they kill this franchise any deader?

andy dufresne said:
Just in time for Star Wars day....something no RVF'er should be without!

Can they kill this franchise any deader?
Click to expand...

May the 4th Be With You-I say that to all the Star Wars fans here...the real fans. There’s a lot I want to say about this but for now I’m just going to mention how it’s oddly fitting that today is the day the new changes were implemented.
I actually first discovered Return of Kings-and subsequently this forum-through Star Wars. One night I was bored and typed in something to the effect of “Last Jedi worst movie of the year”. Lo and behold, among a series of sycophantic reviews written by bought and paid for shills was an article that not only agreed with me but went further saying the movie was “one of the worst films of the decade.”
Mr. Forney was absolutely correct.
After reading that article I clicked on a link to another, then another and-well here we are. It’s weird but as awful as that wretched movie was it lead me here. Yes, Star Wars-not a breakup or romantic troubles.

Interesting rumors. This is mostly Disney related and has some crossover with the Trump thread, but why I post it in this thread is the Disney "insider" claims in the second post that Disney Legal advised several significant people involved with the company to delete their Twitter accounts after yesterday's hack.

Rian Johnson, director of the infamous The Last Jedi, deleted his Twitter yesterday.

Gold Member
As an aside it utterly baffles me that these billionaire deep state flunkies would be using twitter for their DMs, much less failing to delete them in a timely manner.
K

It makes me happy to see Disney starting to decline, it seems their peak was 2019 with Avengers: Endgame beating Avatar for #1 top-grossing film of all time, $1 billion made for their remakes and the Rise of Soywalker.

How to fix the Star Wars sequels:

I liked Star Wars growing up but looking back I see a lot of subversion in them. For cheap entertainment, I like Episode 3 because it's jam packed with fight scenes.

Hi, We're Aspyr, a leading entertainment publisher that creates, packages and delivers fun to millions around the world. Hailing from Austin, Texas, Aspyr strives relentlessly to ensure a quality experience for our industry partners and our players.

Kotor remake (not remaster) was announced 2 weeks back.

Hi, We're Aspyr, a leading entertainment publisher that creates, packages and delivers fun to millions around the world. Hailing from Austin, Texas, Aspyr strives relentlessly to ensure a quality experience for our industry partners and our players.

Kotor remake (not remaster) was announced 2 weeks back.
Click to expand...

Oh great. Years of waiting for some new Kotor...and it's probably going to be full of trannys, empowered women, and evil white characters.

ultralight_hiker said:
Oh great. Years of waiting for some new Kotor...and it's probably going to be full of trannys, empowered women, and evil white characters.
Click to expand...

Well star wars is to begin with that way in some ways isn't it, the empire the Reich the rebels multi culti. Sprinkled with what, kebablah magic like in star trek?

Aspyr made republic commando and the fanbase is not the casual gamer with KOTOR neither. It seems to me less likely than, say, Payday 3, now that they have cosigned publishing with koch media. But they did it to d2r, so yea.

EgoDeath said:
Well star wars is to begin with that way in some ways isn't it, the empire the Reich the rebels multi culti. Sprinkled with what, kebablah magic like in star trek?

Aspyr made republic commando and the fanbase is not the casual gamer with KOTOR neither. It seems to me less likely than, say, Payday 3, now that they have cosigned publishing with koch media. But they did it to d2r, so yea.
Click to expand...

I was actually kinda surprised at the last movie, only watched it once and about 2 years ago so probably off on the details but IIRC the First Order leadership council or whatever it was had a black woman and a woman in a hijab. Figured the bad guys would all be evil old white dudes.
Share:
Twitter Email Share Link
Top