As we've seen, they will literally say they're pulling troops out while dumping more in.

Other Christian
Gold Member
Syrian rebels have been busted trying to stage a fake Chemical attack as the Syrian army make gains in Northern territories. They got burnt by their own chemicals as they tried to set them up around explosives.

Earlier in the day, the Russian Centre for Syria reconciliation stated that the White Helmets had finished filming a staged provocation implicating the Syrian army in the use of chemical agents.

The Russian Reconciliation Centre for Syria stated on Wednesday that a group of up to 15 terrorists had attempted to carry out a chemical attack in Syria's Idlib province.

"On 2 March, a group of up to 15 terrorists attempted to detonate explosive ammunition together with containers full of a poisonous chemical agent. The terrorists aimed to impede the advance of Syrian government forces in the western part of Saraqib city and then accuse the Syrian government of using chemical weapons", the statement reads.
Click to expand...

The terrorists accidentally unsealed one of the containers, which resulted in a leak. Terrorists received "significant chemical poisoning" and failed to carry out the attack, the centre said.

The Russian military said they would soon publish the evidence on the failed chemical attack.

Earlier in the day, the Reconciliation Centre stated that the White Helmets had finished filming a staged provocation after delivering 400 litres of a chemical agent to the site.

The reports come days after units of the Russian military police were deployed to the Idlib's city of Saraqib to ensure security amid escalated tensions in the region.
Click to expand...

Leonard D Neubache said:
Ah, you are from Turkey? You must long to see your homeland again. Here, let me buy you a round trip plane ticket.

What? No, that's nothing. Just my allergies playing up. Here, let me kiss you on each cheek as is the parting tradition of my people. Masalama, friend. Enjoy your time away.
Click to expand...

i am French , it s not an issue for me.
Actually - the numbers of soldiers dead is around 110, this is the info i have from some commanders on the ground.
But Erdogan said it s 33 or so to minimize things.
That what explains his "anger" , he understand he has been played out by Putin (this is my own interpretation)
In general the level of propaganda in Turkey is very high at the moment , a lot of Turks are happy and think that it is a good thing to send them to Europe .
Click to expand...

France...the original turkish kebab lovers since 1536 the year of the Franco-Ottoman alliance during Francis 1st reign. Pedro de Valdivia should have kept his mouth shut and let the Spanish soldiers cut his head at Pavia a few years early.


Soros has a finger in every pie. What deals did Erdoğan make two or three decades ago? 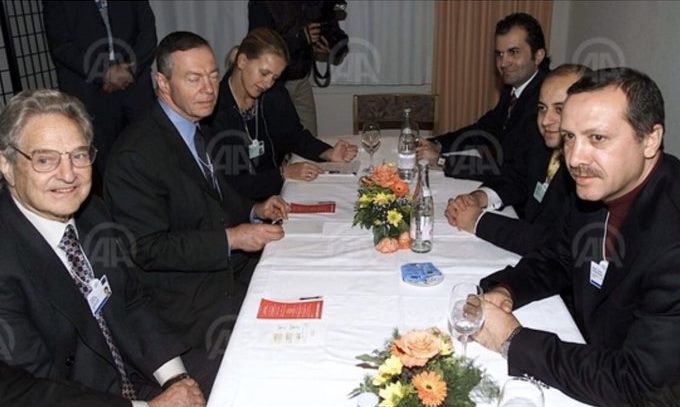 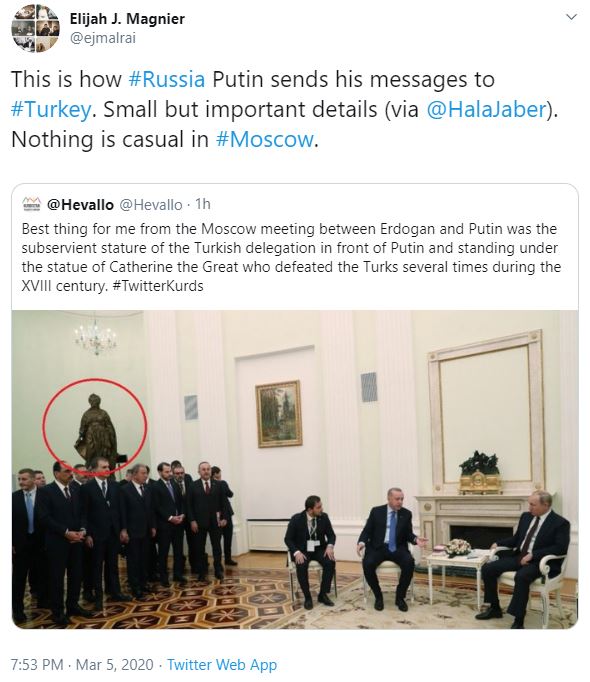 Elijah Magnier thread on the Putin / Erdoğan meeting. Bottom line: Erdoğan got very little so the ceasefire from tonight will probably be very short-lived.

Gold Member
Another Trump Flip-Flop: US To Send Money And Weapons To Syria Rebels

Other Christian
Gold Member
Putin went to some trouble with the arrangement of the symbolic art pieces.


EJ Magnier: The Syrian Rebels do not have the ability to beat Assad. The crux now is the deal between Kurds and Assad. 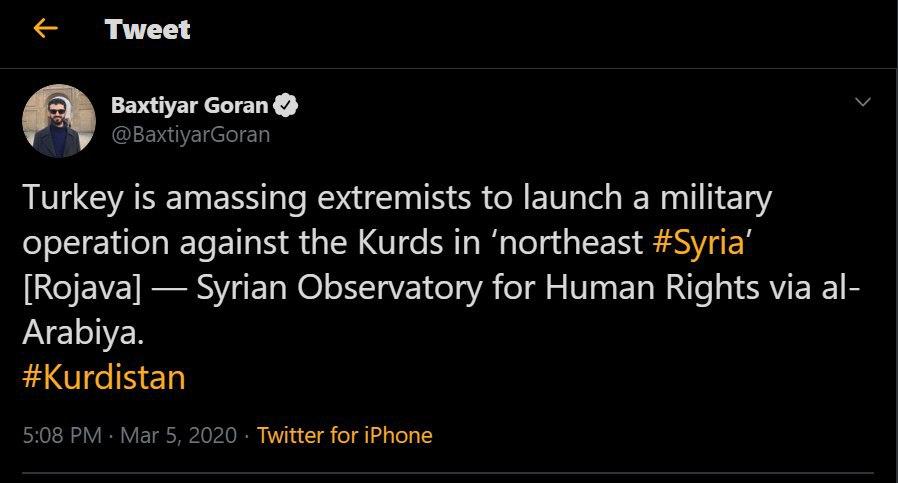 Many rebels are trapped in the South below the Russian/Turkish patrol zone.


The Russian/Turkish deal is designed to fail?


Turkey and Russia conduct joint patrols along the M5 corridor. No jihadi actions allowed... until it all inevitably breaks down again.

Other Christian
Gold Member
The jihadi rebels have admitted defeat for the time being.


An update thread from E. J. Magnier on the deal between Putin and Erdoğan. 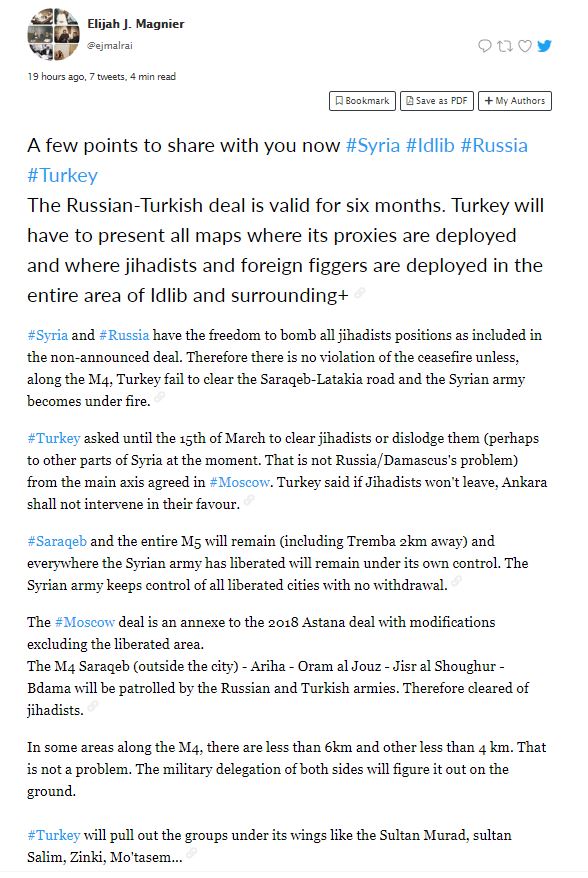 
According to Russia Today the US blocked the UN from backing the Russian-Turkish brokered ceasefire deal. The US meddling in favor of Turkey and the jihadi rebels is shameful. It shows how much the (((neo-cons))) are in control of US foreign policy and how clueless Trump is.

US opposition reportedly blocked the UN Security Council from backing the agreement between Russia and Turkey for a ceasefire in Syria’s Idlib province. US diplomats earlier sought to back Turkey’s incursion in the area.
Friday’s meeting was requested by Russia, after President Vladimir Putin and his Turkish counterpart Recep Tayyip Erdogan hammered out a ceasefire after a six-hour meeting in Moscow the day before.

However, “one of the parties” blocked the Security Council statement that would have expressed support for the agreement, Russian envoy to the UN Vassily Nebenzia said.

Though Nebenzya refrained from naming the culprit, both AFP and TASS reported that it was the US that vetoed the statement, citing diplomatic sources on East River.

Having pulled back its small contingent in Syria – there in violation of domestic and international law – to seize and hold oilfields, the US has nevertheless sought to influence the situation on the ground by egging on Erdogan to invade Idlib in force.

US envoy to the UN Kelly Craft actually went into Idlib and met with the “White Helmets,” the so-called civil defense actually operating hand in arm with militants affiliated with Al-Qaeda. She later went to Ankara and met with Erdogan on the eve of his trip to Moscow, but apparently to no avail.

Washington’s special envoy for Syria James Jeffrey also visited Turkey, promising “ammunition” and supplies for the Turkish army’s incursion into Syrian territory – only for aides to walk that back afterward as nothing more than routine cooperation with a NATO ally.
Click to expand...

Protestant
We have the "news" that Russia paid Taliban militia members bounties for US soldiers, brought to you by the NY Times, who also said Iraq had weapons of mass destruction. Seems like the Syria war situation is heating up again.

And for our Christian brothers here, we have to understand the US war in Syria would be against Syrian Christians as well as Assad's regime.

Protestant
John McShame V.2.0 is ready for war based on lies.

Gold Member
The boomers are dying out, and I'm not sure that these demonic GOP childkillers are going to get much traction selling their narratives to impoverished post-boomer Americans.
R

It_is_my_time said:
John McShame V.2.0 is ready for war based on lies.

This is the way proxy wars have been fought for decades. On all sides (Iran, China, US, Russia, Israel, India, Pakistan etc.) The real question is why is this suddenly a big deal with media coverage?

RWIsrael said:
This is the way proxy wars have been fought for decades. On all sides (Iran, China, US, Russia, Israel, India, Pakistan etc.) The real question is why is this suddenly a big deal with media coverage?
Click to expand...

My guess is they are starting to push for war in Syria, either because they have Trump over a barrel and he can't stop it this time, or because they think Biden will be the next President and it will make it more popular with the people if he does go on to win.

They are definitely building a track record with these stories in the media.

It_is_my_time said:
My guess is they are starting to push for war in Syria, either because they have Trump over a barrel and he can't stop it this time, or because they think Biden will be the next President and it will make it more popular with the people if he does go on to win.

They are definitely building a track record with these stories in the media.
Click to expand...

I don't see it happen. Russia and Iran are firmly entrenched in Syria and the domestic Syrian support for the rebels has evaporated

Some have argued that Russia is the machiavellian player in this theater. But what could the Turks, the Qatari or the Americans possibly offer for Putin to decide to pack up and leave?

The Islamist rebels are in the weakest position since the start of the civil war. Remnants of IS can now only hide in the Syrian desert. The Turkish held areas are bristling with zero discipline, gangster type groups that are fighting each other all the time. Half of them have been sent to Libya anyway. The North East is occupied by a communalism propagating Kurdish militia that is facing a low level insurgency in its Arab dominated areas

There is only one option left to oust Assad. A full on invasion displaying US military might. But even after the MIT/CIA staged chemical attack in 2013 the US chose not to go. Why would they now? The general public is not easily massaged into foreign endeavors by playing the endless drums of war anymore. The average American sees right through this ploy and even if they don't I am pretty sure they have zero appetite for yet another intervention abroad. Those days have passed.

In case you are talking about a US sponsored, Qatar/Turkey/Israel spearheaded and local Arab militiamen cannon fodder kind of operation, that has been tried for 8 years now.

The Russia/Iran/Syria/Hezbollah alliance has won in Syria. Militarily at least
K

This. Literally what I was thinking. And people often underestimate the role of Hezbollah, but it is because of their guerilla fighters who fought Israeli soldiers and their allies in the 1980s till the 2000s in Lebanon that they know how to fight street-by-street warfare, unlike the more traditional large-scale combat that Russia is used to.

Gold Member
The Russians fought in Chechnya, and their boomer officers in Afghanistan.

Erdogan wants the communist Kurds stamped out. He will get his way eventually, it's just that he has to find a way on the international players chess board

He might trade the Islamists in Idlib. A couple of hours ago they bombed a joint Turkish Russian patrol.