If only 1 out of 5 illegals are stopped by the wall then the wall will have paid for itself.
Click to expand... 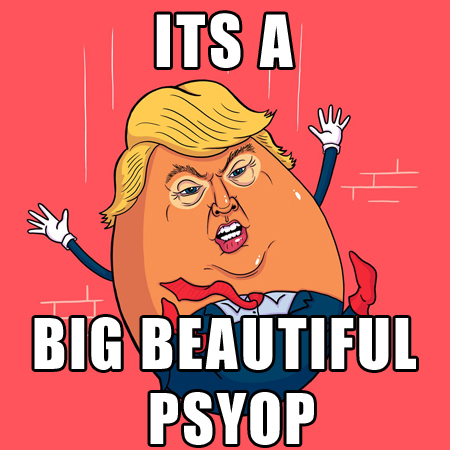 RIslander said:
I believe when Trump talks about the Trump Wall, he's not speaking of a physical barrier as the end goal. He's being figurative and I believe the goal is more of a 'virtual wall'. His aim is to reduce the supply/demand of northbound illegal crossings by eliminating the ability of illegals to find work in the US (demand) and, through redistribution of wealth via a more progressive Mexican government, increase the economic situation for their poor (supply).

Trump isn't a figurative type of guy. If you look at his business history he is very 'literal' in how he goes about his plans. Of course, plans can change but I don't believe he is going to happy with a virtual "wall". His compromise wils take place on size, scope, and structure choices of the wall (you hear him walking back and being open to various sorts of design types for example).
D

This is what I think will happen after the 3 week respite.

Trump does have a lot of executive power, and with SCOTUS being 5-4 conservative he may honestly have a path to a true concrete/steel wall along the southern border. 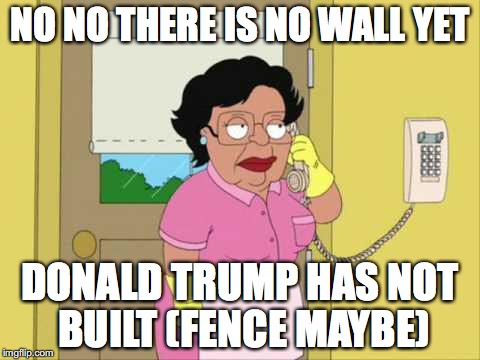 So this isn't turning out to be the big beautiful wall we all were promised. I'd argue a 250 mile extension with steel slats isn't even that big of a deal anymore. I thought, bare minimum, a large concrete barrier spanning all but the most inhospitable sections of the border, equal to or greater than the one Israel has. That included rebuilding the shitty walls/barriers already on the border that invaders easily climb over or tunnel under. I thought Netanyahu's support of the wall and friendship with Trump would've gotten us some big time help from them. They have 440 miles of barrier.
[img=750x500]http://www.invisible-dog.com/pictures/dividing_wall_2.jpg[/img]

Surely we should be able to do what Israel or Saudi Arabia can do, right? Nope, all we can manage is endless defense budget increases. Building something like this would just be too controversial and traumatizing to the American public and their pathological need to be "not racist".

Those are pictures of real walls and real solutions. It's sad the greatest country on earth, supposedly, is being forced to settle for this shoddy barrier, which might have to be even shorter if we are forced to compromise on the measly 5.6 Billion funding.

So we had a breach on the Tijuana border fence-wall a few days ago. Finding pictures of this shit is hard to do but I'll post the link to the LA times that has a decent picture of it. Seems to be an older steel slat design with a mesh fence behind it. Both were breached. I will also post a pic of what I believe is the new steel slat design. It seems to be thicker and more robust steel slats.

My biggest concern is, sure, the new fence-wall might hold up well now, but what about a decade or two sitting out there in the harsh weather of the southern border? A lot of the older steel slat pics I've seen look very rusty and weak. Is that the future of this barrier the open border loving democrats insisted on?

My donation has gone to good use even tho I don't live in the USA.

Whatever happened to Trump's wall? The media never covers the subject where the last I heard, they just did a minor upgrade to the existing fence?

Gold Member
The wall was shown in the Donald Trump thread. I think everyone forgot this dumb blackpill thread existed.

The wall is beyond anything anyone imagined. We have a true military-grade installation going up on the border.

30 feet high
Steel square exterior with 2 rebars individually filled with concrete
High risk areas have a 2 wall system
4 attempt to cut through have all failed so far
The purpose of the wall is to slow down the aliens who wants to cross so that border patrol officers can arrive and apprehend the them
The wall is wired to detect attempts to breach it, pinpointing which area is being affected
When designing the wall, they got world class mountain climbers to attempt to climb wall prototypes and the wall that is going up was unclimbable
The wall is deep enough so that tunnelling underneath would be unsafe
The wall is designed to absorbe heat from the sun so that it will be extremely hot to touch, there is talk of painting it black to better absorbe heat
3 separate countries have asked to copy the design of the wall for their own country
This wall is more expensive than a completely concrete wall

Concrete wall would have been less safe for border patrol. When arriving on scene they can't see people throwing rocks over the wall for example. In the past, drug smugglers would catapult bags of drugs over the wall and it would hit people on the other side
Click to expand...

Samseau said:
This wall is ****ing insane and has completely blown away my expectations. Trump's wall is going to last an easy 5000 years. It will outlast America and probably serve as an artifact for future civilizations to discover. Concrete inside of steel hardened over rebar? I'm not sure most tanks could plow through or blow this kind of wall up. This is military grade, extreme shit that would hold back anything less than the most powerful bombs.

Trump is pulling it off. If illegal crossing arrests plummet and the price of heroin skyrockets we will know the wall is working, and Trump will be a national hero.

Keep hating, blackpillers. Ineffective my ass, no president has done even close to what this one is doing since FDR.
Click to expand...

Samseau said:
The wall was shown in the Donald Trump thread. I think everyone forgot this dumb blackpill thread existed.
...
Click to expand...

The thread was made before Trump was even inaugurated.

What's with the all the haterade the people in greater-Mexico seem to be chugging these days?

Jewish female pundit has been kicked out of Jewish organization for taking picture with naughty gentiles...

Border Patrol officials say communities along the border are safer following the completion of 74 miles of improved border wall systems. Those systems include 30-foot bollard walls, new border-access roads, lighting, and electronic surveillance. Construction on an additional 158 miles is underway with 450 miles scheduled to be completed by the end of 2020.
Click to expand...

That's not a wall, that's a fence.

Nobody ever chanted "BUILD THE FENCE!" at the rallies.

Gold Member
The illegal crossings are going down from covid hitting the border states.

Kona said:
That's not a wall, that's a fence.

Nobody ever chanted "BUILD THE FENCE!" at the rallies.

Idk, I mean I agree it's not what was promised, but if you compare the size of it to the excavator and other vehicles way down in the picture, I'd say it's much larger than any "fence" I've ever seen.
You must log in or register to reply here.
Share:
Twitter Email Link
Top