Based on everything I read about Jack I do think he's being genuine about saying it was wrong to wholesale block the NY Post story links and not grandstanding bc he's afraid of the Senate subpoena. I'm not saying he's a good guy but he's not a pure SJW ideologue. What I think happened is the super SJW faction on Twitter got carried away and did it without Jack and many of the other Twitter executives knowledge.

I think a lot of tech companies are like that, they're not monolithic leftist hives. They're overwhelmingly democrat and liberal but they're not all batshit crazy critical theory spouting SJWs. In the history of Japan post WWI the army, specifically the Kwantung Japanese army made decisions independently without consulting the civilian government such as taking over Manchuria. So the army did something then it became a fait accompli that the Japanese government was forced to accept.

I believe the super SJW faction of every tech company does that and the more moderates (leftist but moderate compared to the crazies) just accept it because its a fait accompli and bc most of the SJWs are diversity hires they really can't reverse the decisions and punish them because that would be racist of course. That's where a lot of the "Oops we didn't mean to delete that tweet it was a technical mishap!" comes from. Some lone SJWs having a tantrum and pushing a button and the top execs having to clean up the mess. I'm not saying Big Tech doesn't do a lot of censorship planned and approved at the highest levels but there's also a lot of SJW mavericks censoring things independently and seeing how far they can go before there is pushback. In the case of the NY Post story with Hunter's emails and photos the censorship was so China style brute force that they had to walk it back.
A

Atlas’ tweet read "Masks work? NO" and preceded several others that questioned the use of face coverings in preventing the spread of the coronavirus. Atlas also used examples of areas where he had said 'cases exploded even with mandates' including Los Angeles, Miami, Hawaii, Alabama, France, Philippines, United Kingdom, Spain and Israel.

I got kicked off twitter a year ago for saying men are men and women are women. Hate speech apparently.

They suspended me for 12 hours.

Gold Member
Gab is up to 1 million visits per day.
Increasingly anyone worth saving won't be on Prvada (Twitter).
Those who bleed their output over to alt platforms do much better once they get banned.

gework said:
Gab is up to 1 million visits per day.
Increasingly anyone worth saving won't be on Prvada (Twitter).
Those who bleed their output over to alt platforms do much better once they get banned.

I am on Gab. Twitter is no longer fun as everyone edgy has already been banned.

Gold Member
I like Gab because of its strong Free Speech stance. I frequently go to Gab to check various pages for news, memes, etc.

As Gework mentioned, Gab is growing as a lot of people are joining since they mentioned they were kicked off, suspended or banned from other social media platforms for posting COVID, Hunter Biden's leaks, etc. Also, people mentioned Parler is a joke for censoring Biden laptop posts.

I was surprised to see this reply to Roosh's Gab post; I frequently check NR's page for latest posts or news.

Roosh V @rooshv
Twitter suspended me for 12 hours because I said that coronavirus is just the flu.
Click to expand...

Edit. Bonus: Forgot to mention that the Gab founder Andrew Torba (@a) is religious (Catholic, I think).
Last edited: October 26, 2020

MRAll134 said:
I am on Gab. Twitter is no longer fun as everyone edgy has already been banned.
Click to expand...

Do you have a handle? I'll be creating a business account, strictly non-political. Will be avoiding big tech, which I've never used.

Gold Member
Gab founder's reply to the Washington Post, who's planning to write a hit piece on Gab & QAnon:

Torba: "You should be reporting on the contents of Hunter Biden's laptop instead of the people who predicted it." 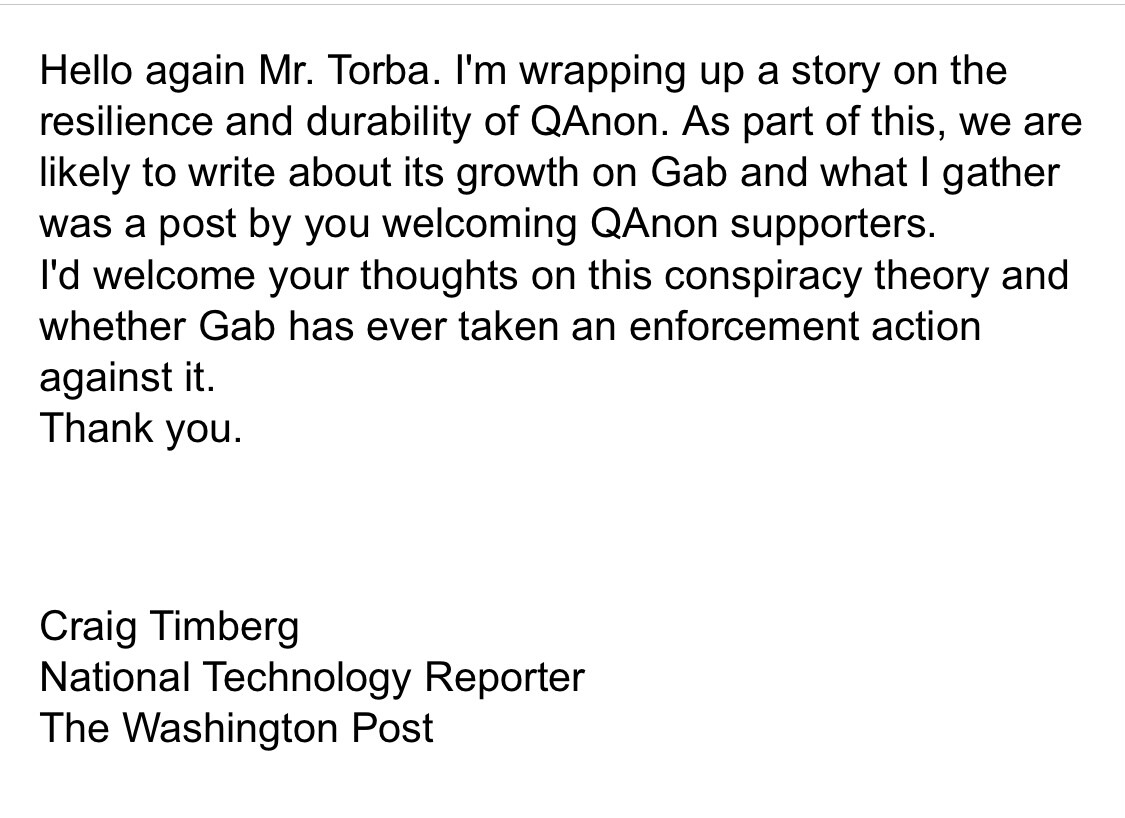 I bet the cowards in the GOP do nothing about it. 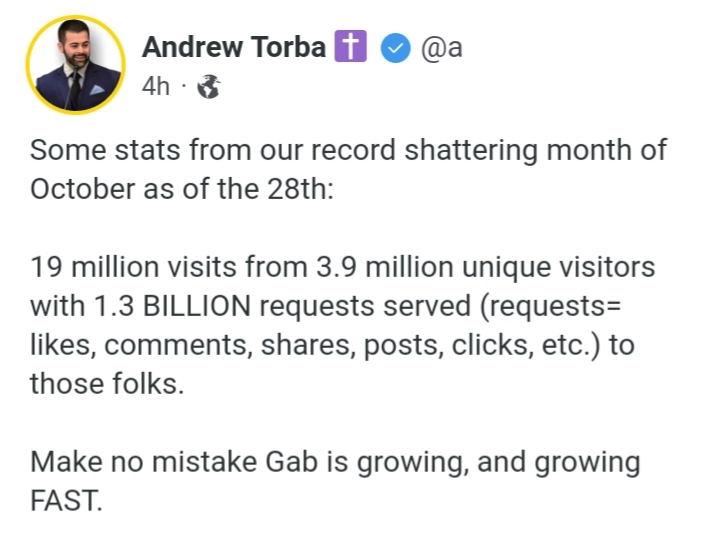 It seems Gab will supercede Drudge, Infowars and others to be the first point for news. It also benefits from having a mobile interface that isn't insuferable (Twitter, Minds).
T

It seems Gab will supercede Drudge, Infowars and others to be the first point for news. It also benefits from having a mobile interface that isn't insuferable (Twitter, Minds).
Click to expand...

Unrelated, but I've found Gab hard to read. On a computer, the size of everything is just too big.

Gold Member
Control and then - (minus sign) makes it smaller in most browsers.
T

Huh. Weirdly, the site was set at 150%. I don't know if I accidentally did this to enlarge/zoom an image on the site, or if it was set as a default. 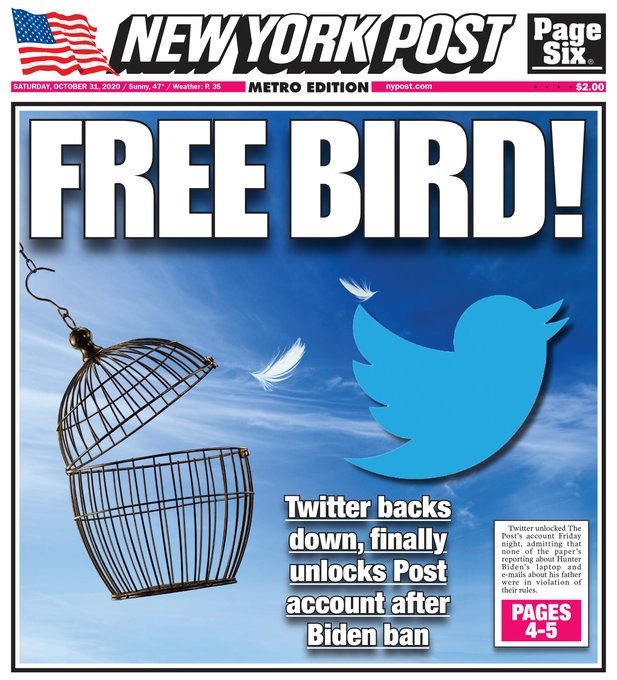 Why would they stop when Republicans have made clear - at every possible opportunity - that there will be no consequences, ever, regardless of how egregious their behavior is? Can you imagine how powerful Jack Dorsey must feel knowing with 100% certainty that nothing is going to happen, ever, beyond a bunch of kabuki theater that results in absolutely nothing?
O

Roosh, I was on Gab and followed a link to watch your, making a pizza video. I don’t use twitter much, but it was crazy to finally see something like this. A warning over a how to make a pizza vid.

Oompoppamowmow said:
Roosh, I was on Gab and followed a link to watch your, making a pizza video. I don’t use twitter much, but it was crazy to finally see something like this. A warning over a how to make a pizza vid.
Click to expand...

The "warning" is because you are going to Bitchute. It's another little trick by the knaves at Twitter to warn people away from a non-censorious Youtube alternative.

I second what people said earlier. I've been visiting Gab more as well. You have out there the vanguard of the banned and so you need to go there understanding that. There are people who revere the Third Reich and display dindu caricatures, there are goofballs, there are non-Christian, blunt guys like Heartiste, John Rivers, and the Zman who wouldn't play on Twitter but sometimes have solid insights, you have Q people, etc. There's a growing number of conservatives out there and Andrew Torba seems like a solid Christian. It's more of a Wild West atmosphere, but any man should prefer that to walking on eggshells on Twitter so we don't offend the precious sensibilities of mentally warped neoliberals. Even the more "out there" types on Gab are more normal and able to reason than so many of the crazed lefties and degenerates on Twitter, people you can't even civilly engage without bringing down the ban hammer. I see Gab gradually transforming into the go-to platform for the entire America First right.

I'm not sure why the America First guys and Michelle Malkin haven't gravitated to Gab instead of going to Telegram instead.
Last edited: November 1, 2020
Share:
Twitter Email Share Link
Top