The Vaccinated vs. Unvaccinated Divide thread

Viktor Zeegelaar said:
Sadly it's not about money anymore, it's about control. The people in charge don't care about the money, they print the money, they have all in the world. You guys are fortunate in the US that you at least have a vast country with differentiated regions: here in the Netherlands it's so concentrated that 1 law just applies for everything straightaway.
Click to expand...

Exactly. I'm grateful I live in the US, where there are 50 somewhat discreet "democracy labs." Forgive loose application of "democracy." Still, us Americans have some advantages and opportunities for how to navigate the decline.

Since the American Civil War, US legal system has operated under the "Federal Supremacy" clause. In the event of a conflict between State level laws and Federal law, the Federal law supersedes the State law. This has been a well-tested and validated precept for 150+ years now.

But there are some recent developments that are "chinks in the armor" of Federal Supremacy. 10 or 15 years ago, various states legalized marijuana (increasing number all the time). Weed is still a controlled substance at the Federal level. The Feds just look away, while State sanctioned and administered facilities are effectively committing Organized Crime (technically, RICO-level stuff) in violation of Federal Law.

Likewise, we have the increasing fad of "Sanctuary" cities, counties, states. These authorities are mandating that none of their employees (cops and judicial system folks, mostly) cooperate or share information regarding someone's immigration status with the Feds. These places have become "safe spaces" for illegals (and there might be as many as 30M of them in the US). As the Federal Government has largely abandoned immigration enforcement, we have this other "chink in the armor."

Recently, us gun nuts have started declaring "Second Amendment Sanctuary Counties" and such. It wasn't a challenge to Federal Supremacy, but it is an internal fracturing, at the State vs. County level, of some State laws. Some counties told their State legislatures - back off.

I'm not trying to derail this to a legalized marijuana, 2A, immigration debate. My purpose is to highlight the corrosion of Federal Supremacy that has already occurred, and how that may present an advantage to us in the future.

So given the "decline" of the US, the great resettlement of people moving to more favorable Red/Blue state environs (and it is happening in both directions), these cracks in the system will get wider and deeper.

It is important to note that this movement wasn't started by a bunch of Southern "Johnny Rebels," claiming the "South's Gonna Rise Again." It was largely started by the left. They opened these cracks. They encouraged the Feds to look the other way. They told the Feds to pound sand and stop going to County Courthouses to look for illegals with Federal Warrants for violent crimes. It is the left that has flaunted the established order of it.

Perhaps State legislatures will pass "Vaxxine Sanctuary" laws. Perhaps they can ban State employees from asking about vaxx status. Perhaps they can prohibit State employees from sharing info or in-putting data re: Vaxxine counts into US Gov't databases. The Feds will retaliate with all kinds of financial punishments/incentives: "comply with vaxx mandate or lose state level medicaid funds, etc." But there are enough people to make this a political dog fight.

Edit - Also, imagine these Vaxx Sanctuary States becoming "vaxx-refugee zones" for like-minded people around the world to come in. maybe it could shift the immigration dynamic such that immigration isn't as solid of a win for democrats.

Papaya said:
Having "more" also means having more to lose
Click to expand...

The assumption you're making is that the government controls the wealthy, and not the other way around.

Eusebius Erasmus said:
The assumption you're making is that the government controls the wealthy, and not the other way around.
Click to expand...

And youre assuming that all "wealthy" people are involved with controlling the system. Thats definitely not the case. The average self made millionaire to multi millionaire has little interest in affecting government. They mostly just want government to stay out of their way.

Edit: To break it down even further the "limousine liberals" that tend to be wealthy enablers of the communist infection are largely not the ones that created that wealth but rather either in the orbit of the wealth creator (wives) or inheritors of someone elses success (descendants).
Last edited: January 1, 2022

Papaya said:
And youre assuming that all "wealthy" people are involved with controlling the system.
Click to expand...

I’m not invoking that assumption at all.

Eusebius Erasmus said:
This reasoning makes no sense. The rich people (who matter) are hand-in-glove with the globalists. Why else was there little pushback against lockdowns and vaccine mandates from the wealthy?
Click to expand...

Then I dont understand this point

Papaya said:
Then I dont understand this point
Click to expand...

Orthodox Inquirer
Very necessary point. We were already under severe mental stress before the pandemic. All the divide and conquer, blacks against whites, men against women, natives against immigrants. All the lies, the feminism, the other isms, the taking away of religion, truth and structure. Females popping antidepressants like they're poptarts, high suicide rates among males and a general sense of hopelessness, desperation and meaninglessness among both sexes in younger generations. The whole corona stuff grinded people down as a new level.

This one is reality. With a bit more programming a new Holocaust can certainly happen. Not saying it will, but they can push the buttons for sure.

Keep them away from the plague spreaders! 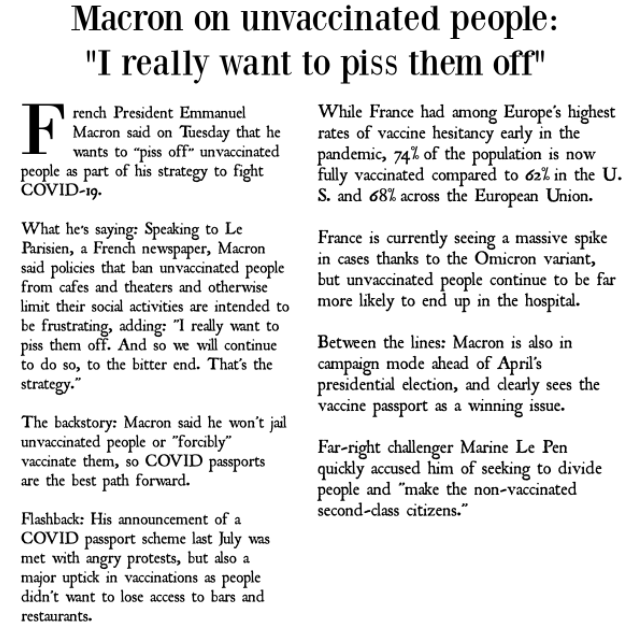 Never seen a nose as Jewish as that.

On a more positive note :

Orthodox
Gold Member
Brace yourselves, gentlemen. Expect to see more and more 'blame the unvaccinated' narrative. It is now starting to ramp up worldwide.

budoslavic said:
Brace yourselves, gentlemen. Expect to see more and more 'blame the unvaccinated' narrative. It is now starting to ramp up worldwide.

budoslavic said:
Brace yourselves, gentlemen. Expect to see more and more 'blame the unvaccinated' narrative. It is now starting to ramp up worldwide.

“Quickly killed off any chance of him getting an exception UNLESS he is fully vaccinated.”

Rules for thee but not for me:

budoslavic said:
Brace yourselves, gentlemen. Expect to see more and more 'blame the unvaccinated' narrative. It is now starting to ramp up worldwide.
Click to expand...

Indeed. My kids' public school (in a leftie city) made a diabolical move today that I did not anticipate.

There was a 'breakout' of Covid at the school (5 cases). Our children are required to test weekly so it was bound to happen. Mind you this city is around 90% vaxxed and every single staff and teacher is vaccinated.

Anyways, they send an email today that all unvaccinated students must quarantine because of the breakout - vaccinated children are exempt.

They are now turning children and their parents against each other to some degree.

(On a personal responsibility note all this I shouldn't have even permitted in the first place. I am in a divorce and have been fighting battles one at a time. I have offered since the start of the school year to pay for our children to go to a private school but my wife has denied it because she does not like the school. Other private schools are beyond my means. I am hopeful this latest news will change her mind as it becomes a burden on her lifestyle.)
Last edited: January 7, 2022