Protestant
Rollo Tomassi talks about all Churches Catholic/Protestant/Orthodox getting assimilated to the clownworld culture:


Something in Western Culture seems to be corrupting them all.

Rollo is firmly anti-Christian and has no skin in the game of whether churches get corrupted or not. His opinion is not welcome in this subforum.

Roosh said:
Rollo is firmly anti-Christian and has no skin in the game of whether churches get corrupted or not. His opinion is not welcome in this subforum.
Click to expand...

Hi Roosh, by the way : I've often wondered if you were the only (ex-) game advisor with such a firmly Christian position.

The two categories are mostly incompatible.
Christian leaders and priests routinely advise their flock members about relationships among other things, sure, but usually they do not claim "expertise" in that field.
On the other hand, most "Red Pillers"/"PUAS"/"Dating advisors" are usually uninterested
in the Christian view, like Rollo - although they often keep quiet about it because it's better for their business.

Roosh said:
Rollo is firmly anti-Christian and has no skin in the game of whether churches get corrupted or not. His opinion is not welcome in this subforum.
Click to expand...

wayfaringstranger said:
There have been a series of church fires in the UK - no interest in coverage by the media - but some guy got 6 months for putting strip of bacon on a mosque door.
Click to expand...

6 months for that? He should have received a medal for being funny.

Orthodox
Will it ever end? I'm pretty sure this isn't some spontaneous act. Parishioners of Panagia Lampadiotissa Church in Mitsero, Cyprus were horrified on Sunday when they arrived to find their church seriously vandalized.

greta_thunberg said:
6 months for that? He should have received a medal for being funny.
Click to expand...

It's much worse in real life - he was beat to death by haji prisoners a few weeks into his sentence, from what I remember.

Any so called "Christian" religion that means the Man is the figurehead is by definition Anti-Christ. Jesus is either truly King or he isn't King at all.
G

Banned
The title of this thread reminds me of Msgr. Dillon's The War of Antichrist with the Church and Christian Civilization.
G

infowarrior1 said:
Jesus is either truly King or he isn't King at all.
Click to expand...

He is King, but that doesn't mean there cannot be lesser kings subordinate to Him. (The heresies of Francis have shown he, in particular, is insubordinate.)
Christ is the invisible Head of the Church, and the pope is His visible head.

Geremia said:
He is King, but that doesn't mean there cannot be lesser kings subordinate to Him. (The heresies of Francis have shown he, in particular, is insubordinate.)
Christ is the invisible Head of the Church, and the pope is His visible head.
Click to expand...

I am talking about the marriage relationship. Anyway I believed I have made myself unclear in that post.

When I said "hello fellow Catholics" I neglected the triple parentheses. I was referring to infiltrators or fake Catholics.

“As for my people, children are their oppressors, and women rule over them. O my people, they which lead thee cause thee to err, and destroy the way of thy paths.”
Isaiah 3:12

Truthfully and Biblically any woman who calls herself a Pastor/Preacher/Priest is a liar and a servant of Satan, defying God and his Word.
B

Other Christian
Why are Christians rewarded for being against their original teachings? A Christian could never join the military but the church I am a part of rewards richly a young man joining the military and being special forces.
L 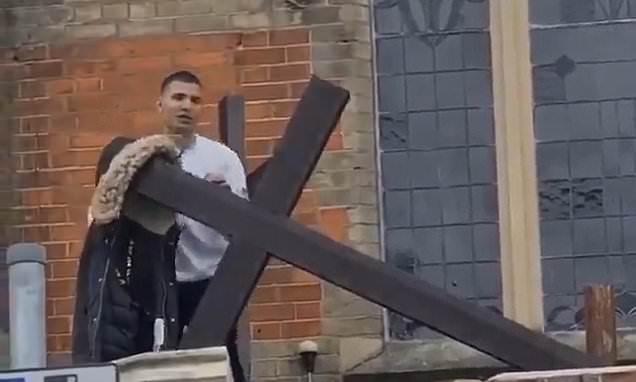 A man has been arrested after footage appeared to show a vandal repeatedly attempting to pull a wooden cross from its base above the entrance of Chadwell Heath Baptist Church in Romford.

Orthodox Inquirer
Gold Member
Any details of the types who burnt the churches in Chile?

Chile is the wealthiest country in LatAm and they had some very sensible (for lack of a better term) center-right social democratic structures created in the 1980s. They have a very healthy pension system, in which the contributions are invested. Most Western systems are paid straight out of tax income, which is insane and a coming train-wreck. While the basic state pension in Chile is about 1/3 of the average income, the basic state pension in The UK is 1/6 of the average income. Leftists twist that, pointing out the basic pension in Chile is about $11 per day and demanding more. The only way it could be more is through the disastrous theft and mismanagement of Western systems.

Chile could be a very stable social democratic state. The excellent economic stewardship of the center-right is being assaulted by their deranged socialists. And the socialists have evidently been corrupting their youth to destroy the safest and most prosperous country in South America.

General, generale. You were only protecting your own doorstep.
A

Bigblabla said:
Why are Christians rewarded for being against their original teachings? A Christian could never join the military but the church I am a part of rewards richly a young man joining the military and being special forces.
Click to expand...

That's not true. A Christian has a duty to look out for the good/well being for others. That can include military service. You have many sainted Orthodox in military roles. (If you're Roman Catholic, St.) Thomas Aquinas wrote up the Just War doctrine, which is a Christian code of ethics for war.
A

Orthodox
@Bigblabla To add what I've said, from someone far more qualified: a more in depth look at the topic Christian Faith and War, written in 1916 by Metropolitan Antony Khrapovitsky (the first head of ROCOR) I suggest reading the whole thing, here's a few of the gems that stand out, especially the first 3 paragraphs because they're entirely applicable to the modern condition of people. 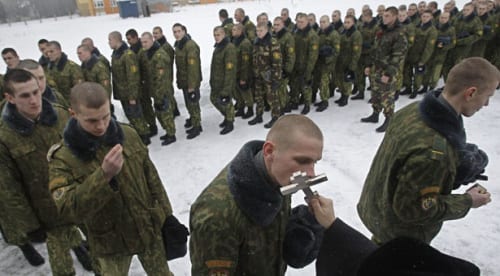 "Really, consider the condition of the Russian people in the decade before the war : the degree to which people were perverted and lying ; how nothing on earth was holy to them, how it became the custom to do things even wild beasts do not know, e.g. to kill one’s own children : ‘how everything was for sale, beginning with personal convictions; how education and science fell and became objects of exploitation, and the schools were converted into diploma mills. "

" If children and old people, women, invalids, clergymen and, finally, people bearing any sort of special state responsibilities are absolved from active participation in battle, still no sort of occupation, sex, or age can absolve a citizen from giving what aid he is able to his country’s soldiers and military undertakings. Even without mentioning moral ties to one’s homeland and army, each must remember that for his own safety and welfare he is indebted to those innumerable deaths and injuries to which his nation’s soldiers are exposed for him. They find it sweet to die for their country when they know that the whole nation, the whole population is glad to help them in word and deed. On the contrary, the lack of sympathy of the revolutionary intelligentsia and the Jewish press was one of the maim reasons for the weakening of our soldiers during the Japanese campaign: is it worth dying for a country whose sons themselves hate and destroy it? Our enemies understand excellently the pernicious influence of such revolutionary outbreaks on the soul of the army, and therefore they spend large amounts of money to incite students to revolutionary demonstrations. "

" It especially disturbs me when protests against war and against the police are raised by people who cannot live for one day without the protection of both. Lev Tolstoy, who has preached nonresistance and the destruction of any sort of structured state, when it came down to a practical denial of the right of private property in 1905, was not satisfied with the common governmental protection and was forced to organize a whole cavalry division of his own to drive off by force brigands in the woods. "

“But Christ, you know, commanded us to love all people without regard to faith or nationality,” thus they begin to cite the Word –of God in which they, our pacifists, do not believe. Having no possibility of objecting further to rational proofs of the inevitability of war and not wanting to take a chance any longer on proposing specific thoughts from the Gospel, they are now citing its general spirit: “Christ commanded us to love our enemies, you know; He said there are neither Greeks nor Jews . . ” They cannot continue this quotation for, while they know well many couplets from Berange, they are in no condition to quote a single expression from Word of God, and in particular they cited this quotation against Jewish pogroms quite vainly. We also spoke, wrote, and published in opposition to pogroms, but, in the first place, we did not ascribe to Christ words of the Apostle Paul, and, in the second place, we do not advise our cosmopolitans to alter the sense of holy quotations, but for once in their lives to read them in their whole form. The Apostle writes to those entering the Church of Christ that they should put on the new man in it, having put off the old, for here “there is neither Greek nor Jew, neither circumcision nor uncircumcision, barbarian, Scyth, slave, nor free; but Christ is everything and in everything” (Col. 3:11). As you see, various faiths are not being spoken of, but only Orthodox Christians, i.e. sons of the Church, who must love one another without regard for nationality and social class."

"Finally, we have the perfectly clear teaching of the Church about murder in war which is set forth in the canonical epistle of St. Athanasius the Great to the monk Ammun and confirmed by the Sixth Ecumenical Council. With these words of the Church, or more accurately of the Holy Spirit speaking through her mouth, we will conclude the present article: “In the various occurrences of life we find differences which exist according to different situations, for example: it is not lawful to kill, but to kill an enemy in battle is legal and praiseworthy. Thus those who excel in battle are worthy of great honors, and pillars are raised to proclaim their excellent deeds. Thus one and the same thing, considering the occasion, is not permitted in certain circumstances, but in other circumstances it is timely, tolerated, and legitimate. One must consider physical union in the same way. Blessed is he who in his youth, freely forming a couple, uses nature for child-bearing. But if he use it for passion, then he is subject to the punishment for fornicators and adulterers proclaimed by the Apostles.”"
Share:
Twitter Email Share Link
Top