I work with nurses and I would say:
#1 they're women so they crave attention obviously.
#2 They work in healthcare so they think they save lives everyday and are heroes.
#3 Nurses usually don't get much credit or attention from the public, doctors do, so naturally these female nurses with a superiority complex from working in healthcare absolutely eat up the idea of doing stupid tik tok videos to tell the world that they're a nurse (receive the praise and attention from being a "hero") and of course the prospect of attention from starring in a viral video.

A national pandemic (while international attention is focused on the healthcare industry and healthcare workers) is the perfect time to broadcast the fact that they're a nurse.

It's a well known meme in the healthcare field, some karen type nurse running up to the scene of a MVC or medical emergency and telling everyone she's a nurse. Like wow congratulations your a nurse you don't have the authority to do anything other than basic life support unless your working under a doctors orders. It's like being vegan or doing crossfit, they have to tell everyone.
J

Reminds me of all the female teachers I know. Ironic how both fields are heavily dominated by women..eh.

In other words--they're just your average woman.

In the past nurses may have been there more out of a calling (and provided fuel for the positive nurse archetype) but these days it pulls in women from all walks of life just because it sits at sort of an ideal sweet-spot (ever-growing demand, high pay, relatively low barrier to entry, high social status). It is to women what "learn to code" is to men.

Apparently, the virus can only spread amongst Trump supporters, not Antifa.
Paul Joseph Watson 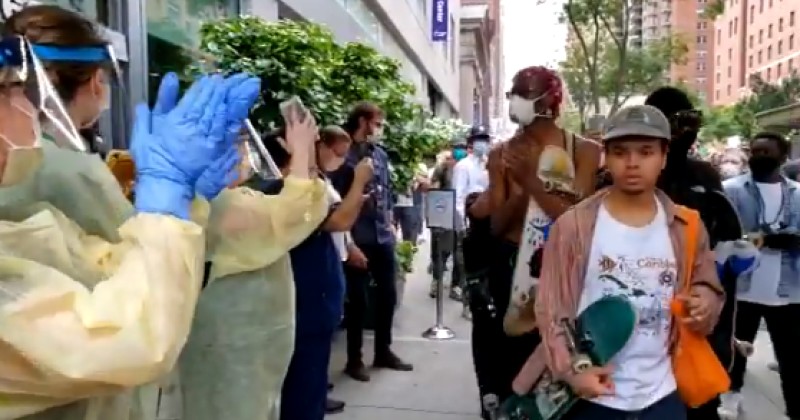 Some of the same hospital workers who would have accused stay-at-home protesters of “killing granny” just weeks ago are now on video applauding thousands of left-wing demonstrators in New York.
“Hospital staff come out to applaud #GeorgeFloyd protestors in New York – demonstrators shout back ‘Thank You’,” tweeted journalist Sarah Walton.

Hospital staff come out to applaud #GeorgeFloyd protestors in New York - demonstrators shout back ‘Thank You’. 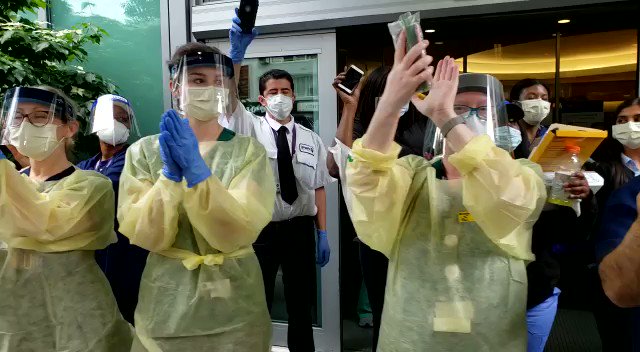 https://twitter.com/SarahWaltonNews/status/1267912563418857473
The footage stands in stark contrast to photo ops endlessly hyped by the media which showed nurses and other health workers in masks blocking traffic at anti-lockdown protests throughout the country, such as the example below from Colorado.

The contrast between the two reactions underscores how coronavirus was completely politicized and that its dangers were greatly exaggerated. If the virus was so deadly and easily transmissible as we were told, why are health workers celebrating mass gatherings of people that increase the risk of the disease spreading?
A virus doesn’t behave differently based on the political beliefs of the person it infects. So why is someone only responsible for “killing granny” is they’re a Trump supporter as oppose to an Antifa radical?
The protests have also spread like a virus over to the UK, where despite the fact that UK police only killed 2 unarmed men in the whole of 2019 (one of whom was a terrorist), mass demonstrations have also hit London. 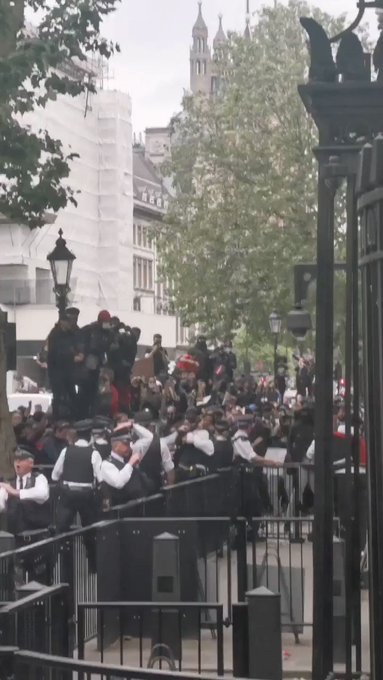 https://twitter.com/Holbornlolz/status/1268217673541877761
But while the media has since March denounced anyone who flouts or even questions the lockdown law, they had nothing but gushing praise for the thousands of Black Lives Matter protesters who have gathered in close proximity three times over the last week.Police are still raiding and shutting down outdoor parties involving hundreds of people, but marches involving many thousands are allowed to go ahead unimpeded.What’s the difference? Does the virus suddenly become ‘woke’ and refuse to spread at Black Lives Matter rallies.

All those cancelled weddings, missed funerals and never-to-be-had last moments with their loved ones that people were expected to endure, only to see other people doing this.https://twitter.com/AyoCaesar/status/1268155517505077251?s=19 …
Ash [email protected]

Huge numbers of people - mostly young, in twos and threes - here in Hyde Park for the #BlackLivesMattter protest. This feels like a big politicising moment!
https://twitter.com/intent/like?tweet_id=1268199066204360706
Click to expand...

https://twitter.com/BDSixsmith/status/1268199066204360706
“It’s kind of amazing,” writes Ben Sixsmith. “For weeks we have been arguing about the minute details of viral transmission. Can you be outside? How often can you be outside? Can you be with other people? How many? And how much distance should you keep from each other? Then masses of people gather in cities across the world for a protest and the authorities do nothing. It just goes ahead.”
“The irony of protestors chanting ‘I can’t breathe’ as they raise the risk of catching and spreading a respiratory disease blows the mind. Granted, outdoor transmission is considerably rarer than indoor transmission – and, besides, most of these protesters are young and would be okay if infected with Covid-19. But after weeks of people having to miss surgeries, funerals, weddings and last moments with their loved ones, you would think people would have to have a good reason to organise an outright mass gathering.”

You will be publicly shamed if you take part.

BLM protests are good and don't spread coronavirus at all.

You will be publicly shamed if you don't take part.

By chance are you open to being called Tiffany?

This is some of the gayest stuff I've ever seen. It's completely un-feminine and un-masculine; just sterile scripted movements. No sort of emotion in this form of "dance", just blind compliance and some hope of getting likes on social media. Good grief.

Where are the strong male nurses who say "Enough of this nonsense!" to these attention whoring women? So far, the only thing I'm seeing is masked-up, chubby soyboys dancing alongside with them. Weak men (specifically weak male nurses) directly caused this ridiculous phenomenon.
R

That article is tremendously sad.
R

That article is very sad.

Incidentally, here is the male equivalent:

You know you don't really know kung fu. You know ninjas aren't going to attack. But you know a secret: that the impossible thing is a ninja attack, not that you would know kung fu if ninjas attacked. In a reality which would permit the existence of a ninja attack, it is inevitable that it would allow you to know kung fu.
Click to expand...

Occult Ritual Transformation and Coronavirus: How Mask Wearing, Hand Washing, “Social Separation” and Lockdowns Are Age-Old Occult Rituals Being Used to Initiate People Into a New Global Order | Have Ye Not Read?

"You might want to think about those dozens of online videos showing fully-masked hospital nurses and hospital workers participating in elaborately choreographed Tik-Tok dance videos, while simultaneously thousands of hapless coronavirus victims are supposedly dying cruel deaths and being stacked up like cord wood in those very same hospitals [...] What’s more, by adding dance to the mask-wearing, the new slaves show their willingness to entertain their captors – to become little more than flesh play-sports to them — just as the Babylonian soldiers of old tried to force the Israelite captives to entertain them with music."

Occult Ritual Transformation and Coronavirus: How Mask Wearing, Hand Washing, “Social Separation” and Lockdowns Are Age-Old Occult Rituals Being Used to Initiate People Into a New Global Order | Have Ye Not Read?

"You might want to think about those dozens of online videos showing fully-masked hospital nurses and hospital workers participating in elaborately choreographed Tik-Tok dance videos, while simultaneously thousands of hapless coronavirus victims are supposedly dying cruel deaths and being stacked up like cord wood in those very same hospitals [...] What’s more, by adding dance to the mask-wearing, the new slaves show their willingness to entertain their captors – to become little more than flesh play-sports to them — just as the Babylonian soldiers of old tried to force the Israelite captives to entertain them with music."
Click to expand...

People should've been washing their hands in general. That part is acceptable. This weird ritualistic timeframe and methodology, however, is weird.
J

Under normal conditions non-scamdemic and without diapers I would find some of the good natured videos, if taken on their lunch break, kind of cute. Nurses are mostly women and many work hard. However with the scamdemic and their pretentious diapers, with non COVID related diseases and injuries left untreated, I find it despicable.