U.S.— Following Tuesday night’s presidential debate, the entire nation has humbled themselves before the Lord and asked for His mercy. “After seeing that train wreck of a debate, I immediately fell down on my knees and asked God to forgive us all!” said concerned patriot Anthony Harb. Knowing...

When Vice President Mike Pence and Sen. Kamala Harris meet in Salt Lake City on Wednesday for their first and only debate, the impact of the COVID-19 pandemic will literally be present on stage between them.

The Commission on Presidential Debates says plexiglass will be used to limit any airborne viral spread between the Democratic vice presidential nominee, 55, and Pence, 61. The two candidates will also not shake hands or physically touch.

“There will be a plexiglass divider between the two candidates and the candidates and the moderator,” said commission co-chair Frank J. Fahrenkopf Jr., according to The Los Angeles Times. “The Trump campaign agreed to that so long as we don’t surround Vice President Pence all the way around.”

A spokeswoman for Pence, the head of the federal government's coronavirus task force, reacted derisively to the preventative measures as the Trump campaign moves to reframe their much-scrutinized handling of the pandemic as the Nov. 3 election approaches.

“If Sen. Harris wants to use a fortress around herself, have at it,” Katie Miller, Pence's spokeswoman, said to Politico.
Click to expand... VP Debate Will Have Plexiglass Protecting Kamala Harris and Mike Pence, as His Team Mocks 'Fortress'

Gold Member
"The debates can't get any worse." 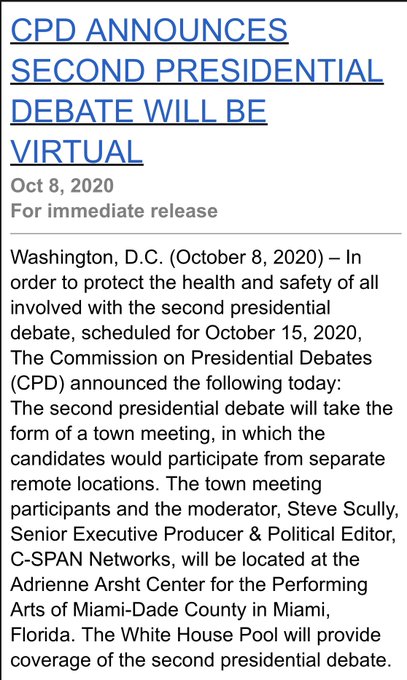 Gold Member
A virtual debate could gives us gems like this:

Yeah, looks like the second debate will be cancelled.

The commission, with the backing of their health advisers, announced on Thursday morning that -- because Trump tested positive for the coronavirus -- the debate that was scheduled for Miami would be held virtually, with the two candidates appearing from remote locations. Trump swiftly rejected that plan, saying he would not show up and setting off a series of events that put the future of all general election debates into question.

The Trump campaign, in response to their candidate backing out of the debate, issued three statements on Thursday that slammed the commission, pushed the Biden campaign to agree to an in-person debate and said they would be willing to push the October 15 debate back a week to October 22 and then move the third debate to October 29, just days before the November 3 election.

They know Biden is weak on debating so they're hiding behind the 'its a danger'. The commission could take precautions and organise a live event; masks, shields, greater distance between the participants. But they won't.

A virtual event would allow Biden to have all the help he needs regarding ear pieces, flash cards etc from his aid staff, so it would be bad for trump as Biden's live performance failures is the whole point of these debates from the Trump side's view of things.

Third debate is still expected to go ahead as scheduled.

Gold Member
To the surprise of no one...

CynicalContrarian said:
To the surprise of no one...

Now this is the kind of winning I can get behind. More humiliation for idiots!

Gold Member
Noting Bob Dole's comments that the 'debate commission' are biased & well as the conduct already demonstrated.
Along with the 2nd & 3rd intended moderators hiding their Twitter accounts.
I am not surprised by this :

Gold Member
Huh...
The guy actually admitted to it?

Gold Member
To the surprise of no one.
Mitt Romney defends / supports &/or apologizes for satanic paedophiles...

The news of the third debate leaving a major foreign policy focus out was met with further derision from the Trump campaign, which has already lambasted the Commission for attempting to make the debates virtual, and for choosing moderators with a track record of bias.
Click to expand...

The National Pulse understands that while “national security” has been included in the list of topics by moderator Kristen Welker, the campaigns had long been discussing the subject being the majority of the debate, rather than regurgitating on issues such as COVID, climate change, and race.
Click to expand... 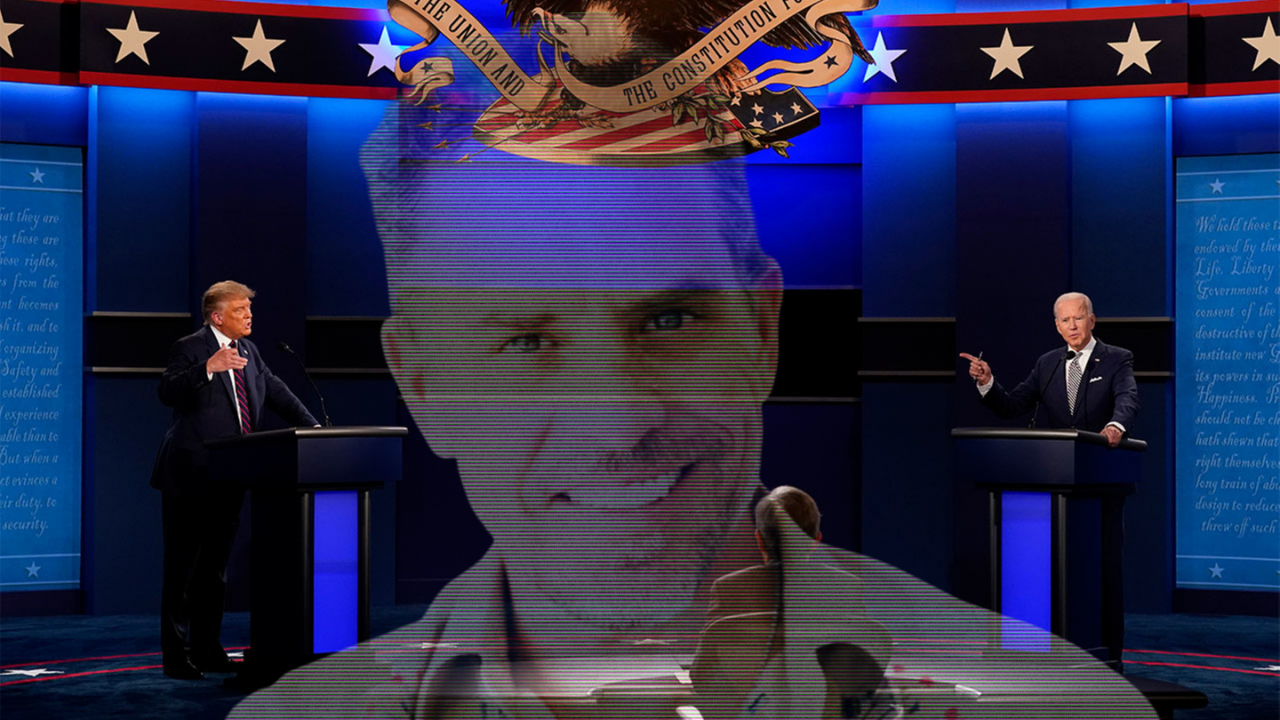 The third presidential debate – set to take place on Thursday – was originally supposed to center on foreign policy. But following the release of the Hunter Biden e-mails/laptop details…

Wrote this day after the first debate, a lot’s changed and improved, still believe these points hold valid.

Gold Member
What Trump could easily say at the debate tonight :

redbeard said:
In 2016, I believe we did a thread for each debate so that we could keep it on topic. I've changed the title to reflect this, and feel free to make a new thread for each event.
Click to expand...

@redbeard, did we re-consolidate these into this one thread after the cancellation?

EndlessGravity said:
@redbeard, did we re-consolidate these into this one thread after the cancellation?
Click to expand...

Yes, the moderation team has decided it's best to keep them organized here.

http://www.dailymail.co.uk/news/article-3126728/Donald-Trump-announces-running-president-calling-United-States-dumping-ground-everybody-s-problems.html Donald Trump is running for president, on the promise that he will 'bring back' the American dream. The multi-billionaire businessmen...
www.rooshvforum.com
As to keep clutter to a minimum. Thanks!

Tonight's is being simulcast across all the major networks and cable news programs. 9 pm ET (6 pm PT) and will be broadcast live from Belmont University, a private Christian university in Nashville, Tennessee.

I expect to see you Super Trumpers out in full force on this thread tonight. @budoslavic @gework @CynicalContrarian @Dusty @Handsome Creepy Eel @Deepdiver