66Scorpio said:
How much traction could the Democrats really get by invoking the Catholic bogeyman? And really, how much dirt can you fling at a married mother of 7 (including two Haitian adoptees and a special needs child) before drawing a backlash that would outdo the "Kavanaugh Effect"? At a minimum, you won't have bogus allegations of her being a gang rapist.
Click to expand...

They'll try to destroy her personally. Guys coming out of the woodwork saying they banged her while she was married, claiming her biological kids are theirs and not her husband's, etc. Won't be true of course, but as we saw with Kavanaugh that won't stop them.

As the allegations will be of personal misconduct and not illegal activity they'll probably do it slowly, drip by drip in order to pressure her into not accepting the nomination. And they'll do the same with any other woman Trump nominates. Then if he nominates a man, it's back to the rape allegations.

Wash rinse repeat. It'll all be purely fabricated of course but 40% of the country will swallow it without thinking.

The needs of the many of America outweigh the needs of Ginsburg clinging on 3 years.

Gold Member
Project 'Weekend At Ruth's' is officially in effect:

The 85-year-old Clinton appointee will work from home following the removal of two malignant cancerous growths from her left lung on Dec. 21 according to court spokeswoman Kathy Arberg. Ginsburg was released on Christmas day from a New York hospital.

The cancer was discovered one week after Ginsburg broke her ribs in a November 7 fall after doctors noticed growths on her lung.

The oldest Supreme Court Justice has battled cancer twice in the past, once in 1999 and then in 2009 when she underwent surgery for pancreatic cancer - neither of which kept her away from court.

During the heat of the 2016 US election, Ginsburg made shockwaves when she told the New York Times that should President Trump become President, it would be time to move to New Zealand, stating "I can’t imagine what the country would be with Donald Trump as our president," adding "For the country, it could be four years. For the court, it could be — I don’t even want to contemplate that."

The comments led many to suggest Ginsburg would need to recuse herself from any decisions involving Trump, with even the Washington Post noting that some "wondered what impact this might have on Ginsburg's decision to hear cases involving Trump. - If there's a redo of Bush v. Gore, how does Ginsburg not recuse herself, given her Trump comments?"

Trump fired back, telling The Times "I think it’s highly inappropriate that a United States Supreme Court judge gets involved in a political campaign, frankly."

He also tweeted: "Justice Ginsburg of the U.S. Supreme Court has embarrassed all by making very dumb political statements about me. Her mind is shot - resign!"

Instead of backing down, Ginsburg doubled down.

"He is a faker," she said of the presumptive Republican presidential nominee, going point by point, as if presenting a legal brief. "He has no consistency about him. He says whatever comes into his head at the moment. He really has an ego. ... How has he gotten away with not turning over his tax returns? The press seems to be very gentle with him on that."

"At first I thought it was funny," she said of Trump's early candidacy. "To think that there's a possibility that he could be president... " Her voice trailed off gloomily, seemingly shocked that there is a chance the majority of Americans may be revolting at the status quo.

"I think he has gotten so much free publicity," she added, drawing a contrast between what she believes is tougher media treatment of Democratic candidate Hillary Clinton and returning to an overriding complaint: "Every other presidential candidate has turned over tax returns."

Trump - who would pick Ginsberg's successor should she pass away during his term in office, was able to put aside their differences and wish her a "full and speedy recovery" in December.
Click to expand...

The Father said:
Seems likely. Though I think the democrats may encase her in bubble wrap to ensure she gets through the next two years!
Click to expand... 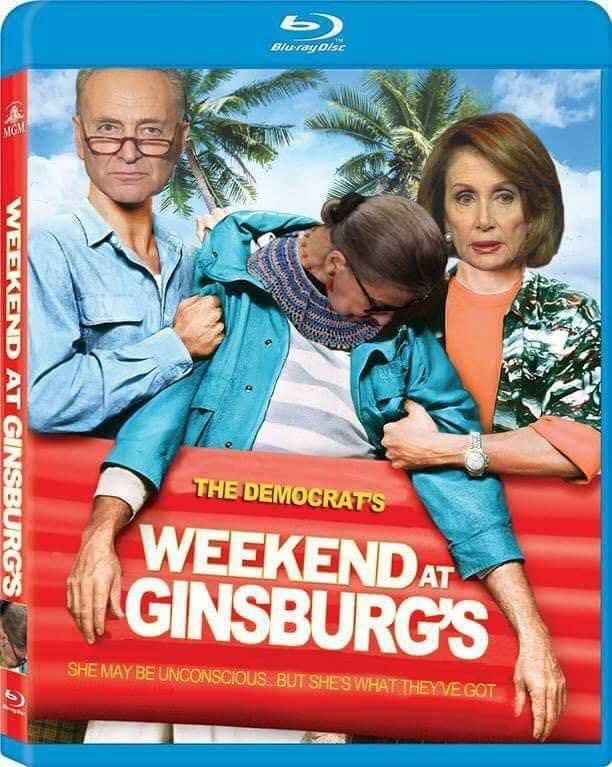 Shit I wish I had seen this one before I spent 20 minutes putting mine together. MUCH BETTER!

How can anyone label her absence as unexpected? She is an 85 year old with stage 3 or 4 cancer and some broken ribs who is recovering from surgery. At her age and with her medical history she should be thankful if she gets out of the hospital let alone return to work.

I have to say this: Conservatives HAVE to get over their kid-glove treatment of situations like this. I think this woman needs a few protesters in front of her house or whatever, so that she and her family and aides see that people are angry. She needs to understand that there are real people, not just some cardboard cutout Orange Man, who are telling her to step the fuck down. And yeah, the Democrats will piss and moan about "not being dignified" but for the thousanth time, fuck them. They use these fake prissy rules when they want to escape the consequences of their actions, but they then are ruthless assholes when they want to fuck over other people.

What kind of morons want to replace Ginsberg with another woman? This is ridiculous.

rpg said:
What kind of morons want to replace Ginsberg with another woman? This is ridiculous.
Click to expand...

Might be safest under the circumstances, based on how vulnerable all male candidates or for anything nowadays.

On the other hand, it would look repetitive to pull false accuser twice in a row, this might be our best chance to push another male through.

If she is not in court she should not get a vote. Her law clerk s we're not confirmed by the Senate rpg said:
What kind of morons want to replace Ginsberg with another woman? This is ridiculous.
Click to expand...

Might be safest under the circumstances, based on how vulnerable all male candidates or for anything nowadays.
Click to expand...

What gender does Ted Cruz identify as these days?
E

Gold Member
Let Ted stay in the senate. He just won a hotly contested senate race against Beto. Beto could run again and win if Ted's replacement turned out to be some sort of schmuck like Roy Moore.

Someone like Kethledge would be good though. It should be someone who is male, heterosexual and extremely conservative.

As an aside: a number of us, back during the Kavanaugh hearings, were watching Jeff Flake put on one of the most cringe-inducing one-man cuckfests in recent history and trying to figure out his deal. I wish I could find the comment, but I remember one RVFer speculated at the time that Flake, being on his way out, was trying to advertise himself for a post-term future as some news network's pet "conservative".

Well, that guy is owed a beer.

Gold Member
RBG could stay alive another 5 years and it wouldn't shock us. I don't think she retires today, and I'll believe she retires when I see it.

I'm curious who these "sources" are that are reporting RBG retirement? If it's random guys on twitter, well there you go.

RBG is not even in DC, but in NY, preparing to submit her resignation, says Gorka, citing multiple sources.

Reading the twitter thread, among those sources is a law clerk - presumably at SCOTUS, who would be in her loop of those notified.

"Are you ready for what will ensue?" asks Gorka.

THIS IS GOING TO BE A GLORIOUS FIRST QUARTER for PDJT!

Gold Member
Two lung cancer tumors, and pancreatic cancer before that, that's very serious and likely terminal. Two years is a bridge too far for her, especially since there are no guarantees that Trump won't win again.

Buzzie should get her life in order, spare herself and her loved ones in the time she has remaining and settle down in a restful Florida retirement.

Gold Member
I honestly thought she would be stubborn and die on the bench, it appears she has some sense that her final years should be with family and away from the zoo of D.C.
You must log in or register to reply here.
Share:
Twitter Email Share Link
Top