Orthodox
Gold Member
A few weeks ago I was in a railway station and gave up on the idea of waiting in an incredibly long toilet line.

On average women will take longer so if you create unisex toilets in the name of forcing equality, it means men will be forced to wait even though their biology allows them to be faster about it. This is standard socialism, anyone with any kind of advantage must be reduced to a common standard so that everyone is equal.

Anyway, I don't make that big a deal about it, only saw this in one area but it needs to be recorded somewhere in case it becomes a trend.

A slightly separate matter, there has been a push in particular in Germany for men to sit down while urinating, which is another insulting attempt to impose equality against the natural order.

There are two closed threads here, 1 and 2, I did check before posting. They are not however that relevant to what I am talking about here.

It just makes me sick the crazy lengths the left will go to to bring about their desired utopia at all of our expense. Not sure if any forum members have had contact with the unisex toilet concept. There may be other pros and cons but there if nothing else it will slow things down.

Catholic
What a great topic, we have all been waiting for this.


Stadtaffe said:
Anyway, I don't make that big a deal about it, only saw this in one area but it needs to be recorded somewhere in case it becomes a trend.
Click to expand...

You don't make a big deal about it and then you start a new thread about toilets?


Stadtaffe said:
There are two closed threads here, 1 and 2, I did check before posting. They are not however that relevant to what I am talking about here.
Click to expand...

Why do you mention these closed threads anyway?


Stadtaffe said:
Not sure if any forum members have had contact with the unisex toilet concept.
Click to expand...

Even if I had, I wouldn't make a story out of it.

Anyway, I'm already looking forward to your next thread, probably again with a highly explosive topic.
B

Protestant
It’s a fun topic that my friends, family etc have discussed over the last couple years. My process…if the seat is down I try to pee the best I can without hitting it. If I do I’ll wipe it off, out of courtes for decent tradition women who might come in after me, they shouldn’t have to wipe off a seat from a man that peed on it. If the seat is up (ie a man was in before me) I pee with the seat up. Either way it assures I don’t have to touch the seat unless I’m at fault. If a woman comes in after me and complains that I left the seat up, I just give her a stare and walk away without saying anything.

Protestant
Gold Member
At concerts and other events at RFK Stadium, women have been going in men's bathrooms for years. The line for the women's bathroom is always outrageously long. This has been tolerated forever now.

Orthodox Inquirer
Whenever I see an "All Gender Toilet" I think to myself, how they could have accomplished the same goal without pissing people off if they just called it "Unisex."

Other Christian
Gold Member
In my local pozzed liberal city many restaurants (and Whole Foods) have responded to this movement by getting rid of their boys and girls bathrooms and replacing them with smaller single-toilet rooms with locking doors so that they're gender non-specific. Outside the stalls are the sinks, so you'll have men and women washing their hands right next to each other. I expect that this will make some women uncomfortable because they'll no longer have privacy to adjust their clothes or makeup since the mirrors are over the sinks where men also have access. Also, men and women alike won't have any privacy to pick the food out of their teeth.
S

Orthodox
Gold Member
Will qualify what prompted me to post this, it was two toilet visits while visiting Denmark. Since @Bird thinks I was complaining about nothing I researched this a bit and found out I was not alone in this thinking:

It’s hard to find a gender-segregated restroom in Scandinavia, but unisex facilities have their own drawbacks.

As we made our way across Scandinavia, though, my admiration for the local strain of toilet justice faded somewhat. The Nordic toilet architecture doesn't eliminate the lines: It just means everyone has to wait. Setting up unisex restrooms like old-fashioned women’s ones enhances equality, but, in typical socialist fashion, by spreading the inconvenience around rather than removing it for everyone.
Click to expand...

I experienced it once at the railway station and once at a bar, just really long lines for men equally as for women brought about by some design decisions, possibly not having the standard 'urinal' bathroom furniture - I don't know, I wasn't game to wait in such a gigantic line to find out.

It was I suppose just culture shock. It made me really angry, so much so that months later it was still popping into my mind and I just had to post about it. Just the socialism factor - there is natural inequality in life, and must this one natural advantage of men, that they can use the bathroom faster, be attacked in this way, so we have to wait in lines like women.

Anyway, let the Danes have their unisex bathrooms, I don't think this trend is spreading thankfully, I will be ready for it if I go there again.

After the madness of the lockdowns, I suppose I'm on hair-trigger for crazy changes in society quietly being introduced in by leftists and wokists.

Orthodox
I wonder whether since the advent of unisex toilets there has been an increase in women complaining about being confronted by perverts in public toilets...

Protestant
Unisex restrooms are a horrible idea. It's just another way to push the trans agenda. Most if not all lack urinals and women prefer the seat to be left down so it encourages men to be feminine and sit while peeing as well. Women's restrooms often have baby changing stations and I doubt a lot of women would be comfortable using those in the company of a lot of strange men.

Nevertheless, A Virginia school district is going to build an elementary school with unisex bathrooms.


Lawrence87 said:
I wonder whether since the advent of unisex toilets there has been an increase in women complaining about being confronted by perverts in public toilets...
Click to expand...

The UK went full in on these things and left a lot of women unhappy.

Women have been avoiding new £36,000 gender-neutral lavatories at the Home Office because men are leaving their cubicle doors open while they’re inside.

A notice has been placed outside the unisex toilets at the department’s Westminster headquarters asking men to ensure they only use them with the doors shut because their behaviour was keeping female colleagues away.

‘Women are finding use of the toilets quite distressing and are not using these toilets as a result,’ it continues.
Click to expand...

Some girls are missing school because they don’t like the growing trend of mixed sex toilets.

They are staying at home when they have periods because of “period shaming” from some boys.

Other girls are going all day without drinking water so they don’t have to use the facilities and some don’t use them because they fear sexual harassment.

Some Muslim girls also dislike having to adjust their hijabs infront of boys.

The findings from a consultation started by women’s group Lleisiau Merched Cymru/Women’s Voices Wales comes as growing numbers of schools are opening mixed sex toilets which they claim reduces bullying and are more inclusive.
Click to expand...

Other Christian
Something that doesn't involve "gender neutral toilets, but which does illustrate the mindset of those involved.

A new toilet block was built in a park in the UK, with male, female and disabled toilets. When the block opened, there was a problem with the disabled cubicle, so it couldn't be used. Rather than seal it off, but keep the rest open, the local council closed the entire block, until the fault was rectified.
S

Orthodox
Gold Member
Probably worth emphasising that one image from the article linked by @Garuda : 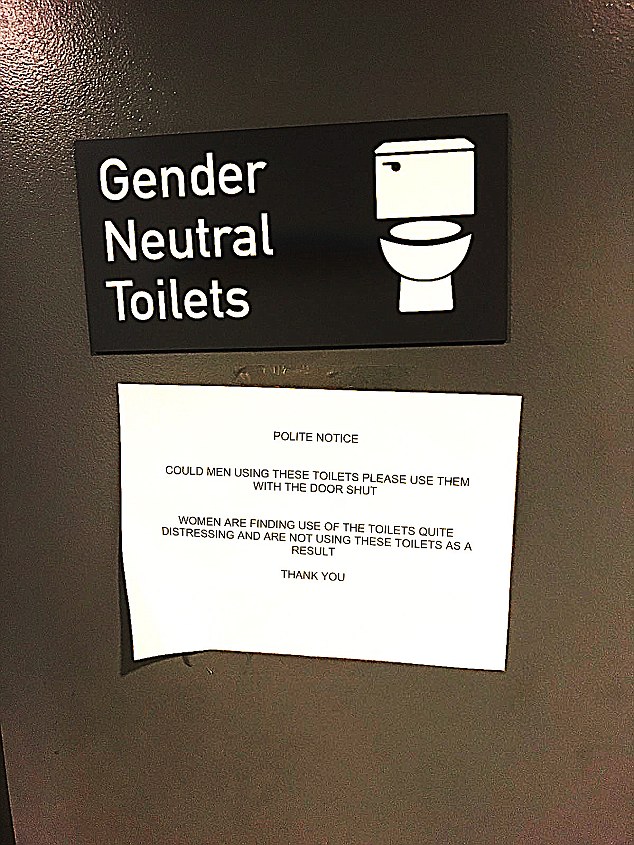 That is truly ludicrous. Men did not ask to have women in the same bathroom who would then nitpick about the closing of doors.

I have been thinking about this whole gender neutral toilet thing and what is wrong with it. It goes beyond just making men wait longer to pee.

I am not that bothered to use a urinal if there are women around. Slightly more bothered to check my grooming in the mirror if women are there. It is worth reading the articles Garuda linked, women are bothered about it also because of their periods.

But what truly bothers me about it is the motivation behind it - is it that economists have calculated how much money could be saved by not having separate male and female toilets and found that it is enough to significantly lower national debt? I think not. I really doubt there is any significant argument for this around economics, saving on porcelain, concrete, building labour costs.

It has to do with social conditioning and is probably in line with other degenerate agendas intended to harm relations between the sexes.

There is a wikipedia article about it:

en.wikipedia.org
It's tl;dr not sure if anyone has the patience to sift through that but I do notice the headline Western sex-separation as a modern development and wonder whether that is truth or propaganda.

So this just adds to the list - yet one extra thing to make men less manly and women less womanly.

Who is forcing this on us? The regressive left - they are the enemy. I cannot see how this could possibly come out of an economic or architectural argument but if anyone believes it does, please share.
B

Protestant
I have never seen unisex restrooms in the US that were multi-person restrooms, but I’ve seen plenty of places where 2 unisex single person restrooms have rnow replaced a single use men’s and single use woman's restroom from the normal past. What degenerate places are you all seeing restrooms where men and women both share a restroom together?
A

Non-Christian
The country I live in has abundant and spacious disabled toilets in every public location. I have a minor bowel condition so avail myself of them to avoid any annoyance with unisex or even men's toilets on occasion.
Share:
Twitter Email Share Link
Top