Coja Petrus Uscan said:
Ron Jeremy faces 2000 years in jail, over acusations from 23 women. Not likely that the industry were unaware their star schlub was a serial rapist. 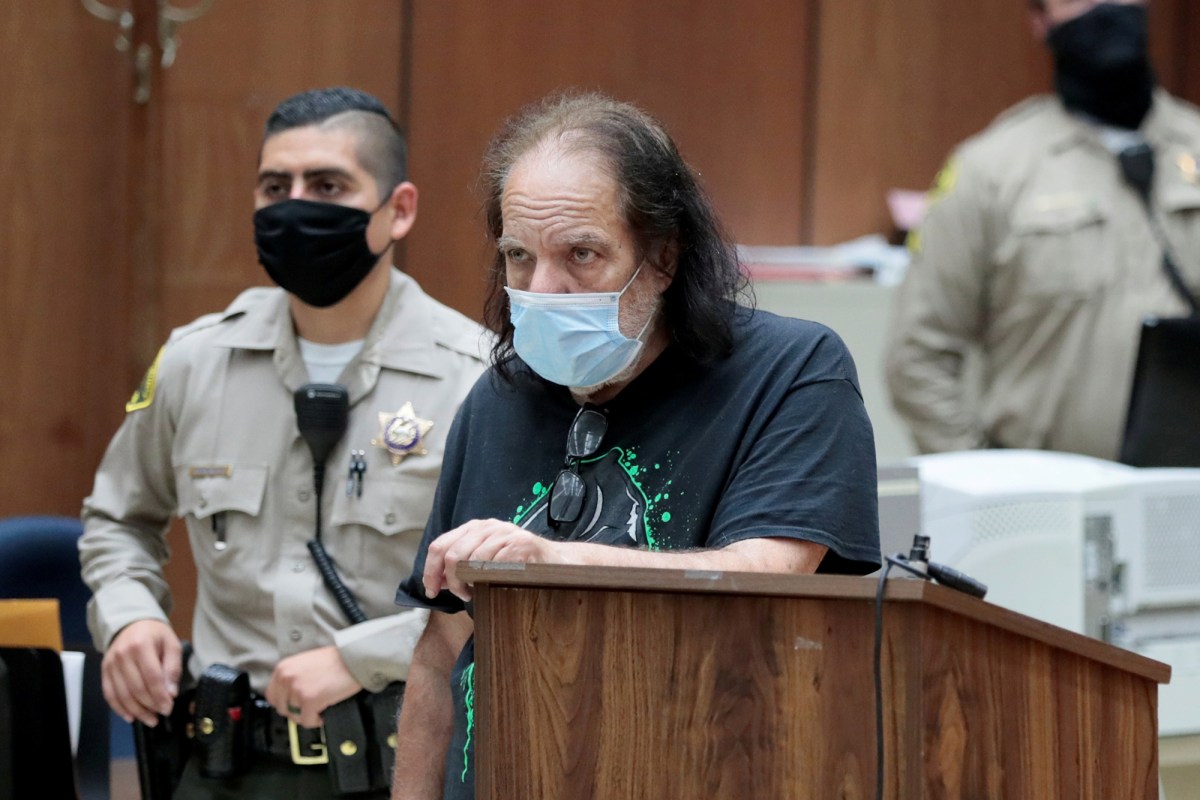 By the looks of him, he will die in prison.

Dutch dude did an interview with him couple years ago. Look at the state of the man, really abominable. Tragic where the addictive material path can lead you.

Aubert said:
Anyone else have noticed that American is one the most violent and dehumanizing? Chocking, spitting, slapping are more common. And of course verbal abuse.

Strange that I'd share even one opinion with a morbidly obese jewish feminist in even the most remote fashion, but there ya go.

Strange that I'd share even one opinion with a morbidly obese Jewish feminist in even the most remote fashion, but there ya go.
Click to expand...

I believe it might be due to normie-ism, via implied means.

I remember when I first started going down the rabbit hole of verboten facts and assessments. No one specifically told me any of the information was mad, bad or stupid, but so deep was my programming that I thought I may go mad if I finished reading the forbidden book I began with.

There are a few themes:

- Most Hollyweird and TV is now dark and sadistic; compare it to say Back to The Future or The Cosby Show; full of rape, murder of the innocent, duplicity, festivals of cheating, all characters are negative; and this in a time when it is an uber-progressive love-fest When I query viewers of this sado- material as to why they watch endless reels of killings and treachery they don't like it and often speak of it's profundity. There is a notion that there is nothing bad about simulated debauchery, nor constant viewing of it.

- There is the notion of strong women, going out into the world and proving they are just as good as better than men. Ignore the giant civil-corporate apparatus that smothers men to enable this. Mentioning this is fragile. Mentioning what holds women back is powerful. Masculine traits are encouraged in women as well as all ungallant post-Christian male habits. So women must prove themselves by playing men in casual sex (Sex And The City). Again, somehow they manage to miss that most pornography is degrading for women. Pornography that is degrading to men is a weird subset for total mama's boys.

- There is the notion that stupid right-wingers are all pent-up, suppressed sex monsters, who can't wait to get home to put on their gimp masks. There is some truth to this. But it is more so true, the people who seek to limitlessly engage their desire for flesh are contorted perverts. Modernists believe sex is a pleasure that should be pursued. If two people agree to have sex, you can't really have much to criticise it.

- There is a notion that women derive power from sex appeal and they should exploit men with this. This is good.

Thus the modern normie has pre-packaged narratives from which they can derive their latent programmed position on pornography. Anything you would use to criticise pornography is from an older morality and modern people think that is all oppressive nonsense.

This is the narrative for normies. In a political (materialist) world there are four groups - the ruling class, the servant class, their political constituency and the out-group. As a Christian, traditionalist, conservative you are the out-group in all institutions. The political constituency are rank and file leftists and normies. The ruling class has an outlook which is almost completely based on power that is disseminated by their slavish servants (Brian Stelter).

The elites are planning to roll-up the drawbridges on the economy. The winners have been picked (them). There will be no more upward mobility. They will control everything and guard themselves with a wall of leftism. All revolutions in history have been led by men. They are made from it. A subset of men have the characteristics that allow them to dominate any field of endeavor. Women who are affirmative actioned into positions are there on loan. The new feminised, go along to get along mentality of corporations and institutions breeds subservience and bars endeavour. Mark Zuckerburg, Jack Dorsey, Bezos etc. are all better served if the barbarism are kept from the gates by human shields.

Then there are the feminists, who are a power block the ruling class has grafted on to them. Most feminists are just suffering from resentment/rejection. But there are others who want to be men. They're called lesbians! - real ones. Of all women who can compete with the most gifted, driven and lucid men, the lesbians are the most competitive. The goal of the lesbian/feminist is to become an alpha-male, something which is not possible. This is why they resort so much to attempts at humour, as the secondary route for men is try and constantly make people laugh. While the alpha just is.

The feminist movement was a process of trial and error, of lesbians/feminists trying to lever society into giving them power. That is all they really care about. They have been grafted into the elite for utility; and the narratives of normies and leftists are whatever suits them.

Coja Petrus Uscan said:
There's also been a rise to prominence of witch hunts for minor issues and made-up issues, like manspreading and mansplaining.
Click to expand...

...and "campus rape" which they have been hunting for decades already, but again, hunting an imaginary evil with the the intent to destabilize and subvert society.

I will never understand the mental gymnastics required to hold both of these beliefs at the same time:

But somehow, SJW's manage it. You have to marvel at the programming.

Warrior Nobility said:
Not entirely true. Prague was important for slavery only relatively briefly in the 10th century after Magyars invaded Pannonia and the new slave trade route with Eastern Europe was established through Prague. However the famed bishop saint Adalbert of Prague battled furiously against this and slavery was ultimately outlawed.

In Christendom, it was not allowed to have Christians as slaves and as more and more Eastern Europeans christianized (most Slavs accepted Christianity by the 11th century), there were less and less potential slaves from the Eastern Europe and the slave trade moved to the Mediterranean.

In the next centuries, the slave trade was dominated by Italian merchant republic of Venice and Genoa who controlled the Mediterranean and had connections with the Muslim powers. For example they controlled the route from Crimea to Mamluk Egypt, and sold slaves to the Muslims. This is why the Genoese had colonies in Crimea and Feodosia was one of Europe's biggest slave markets. This was not allowed by Christianity but they kept doing it anyway. They were selling slaves to Mamluks who would then use those slaves to fight against the crusaders.

Of course the Jewish merchants were also heavily involved in slavery, but I'm talking about the state powers and their established routes here, the Jewish merchants just jumped on board of the established connections, they were not creating their own routes. I think their influence in the slave trade faded and was almost completely gone in the 12th century, but then rebounded in the modern era with transatlantic slave trade as well as the rise of the Ottoman empire. Basically the Italian city states of Genoa and Venice kept the Jews out for much of the middle ages. Those Italian merchants were not fond of the Jews. In Venice, the Jews had no presence during the middle ages and when they arrived in the 16th century, they were put in the ghetto, the first ghetto in history and from which the name derives. The Jews were much more welcome in the Ottoman empire and as the Ottoman empire grew in importance and the power of Genoa and Venice faded, the Jewish merchants became more important again, and then with the transatlantic trade new opportunities opened for the Jews as well. But in the middle ages, the Jews did not really have much power and influence in Europe.

As for the Slavs, the name Slav has other origins, it was the Westerners who called slaves after Slavs, and not the other way around.
Click to expand...

The name slave has been around since Roman Empire era.

The wars against Spartacus and the slave rebellion were called " Servile Wars" because they were all rebellious slaves.

There are many references that state that name Slav comes from slaves.

Tatars used to kidnap hundred thousands of slavic women in todays Ukraine and Russia and sold them in the Ottoman Empire. Slavs in Balkans were also sold as slaves but in smaller quantities. There are evan stories that Albanians in the Ottoman army or mercenaries took slavic women as slaves in Ukraine but later changed their mind and married them.

There was a period of time in the 18th and 19th centuries that besides Russians, all slavs were under foreign rule.

Venice was the last remnant of the western roman empire and they build their system similarly to the Roman Senate and republic.

The control system of Venice was astonishing. However there were many Jewish merchants in Venice and not all were in ghettos.

However saying that slave trade in middle ages europe was invented and was somehow in their hands is a lie and it is true they didn't have the influence they got letter on after middle ages.

However they got heavily involved and dominated the Atlantic slave trade and Jews also took control of the monopoly of the diamonds trade too
Share:
Twitter Email Share Link
Top