Will younger women be put off as I get older?

Stadtaffe said:
Was good to read about the huge age differences here though. The biology and instinct of it is in favour of potentially large age differences, but the culture (in the west) wants to make that taboo. Just on every other point where western culture is fighting nature, nature and the truth will win. Anyway, your eyes don't lie, look at some of the pairings out there..
Click to expand...

Thank you for this. I just wonder - how does one meet women below your age range. and who want children. I work shiftwork (3 weeks on 3 off) at a mine so it makes attending regular activities difficult - and difficult to meet women who don't leave or find something new during your 3 weeks at work. A plus however is I am extremely mobile. I do own a house but being single I no longer need all of the space and have rented it out.

GWYW2015 said:
Some women on dating sites will say they will go out with a divorced man or a widowed man but not someone who is single and never married. Talk about making it difficult!
Click to expand...

Remember the old adage watch what women do, not what they say.
D

BananaLlama said:
I just got out of a long term relationship with a 26 year old - 3 years together - it got to the point where either we got married or we broke up. Here's the catch - I said I would not get married unless she agreed to have kids. She flip flopped for a year and then two days ago she woke up crying saying she didn't want kids ever. So I told her to get in the truck, we went and loaded all her shit out of my house and two hours later we were broken up. I thought I was going to marry this woman - but she chose career over children.

Anyways, here I am 29 years old with 3 years of my life wasted. I am financially in a great position, I own a house and have a good job clearing 130k. I am white and attractive - though I wouldn't call myself fit (I'm a skinny fucker, 5'10 and 145 lbs). I just worry about the prospects of dating my own age - everyone is either married with kids, never wants kids, already has kids, or honestly unattractive. But I worry that I'm too old to date the crowd that would want kids - and still be attractive.

Also it will be intimidating to ask girls on day one if they want kids.
Click to expand...

I'm 30 and get significantly more attention from college aged girls now than I did when I was their age. You are in an excellent position. It honestly sounds like a blessing in disguise.

The worn out women our age are a pain in the ass.
H

Waverer said:
If your wealth and status grow faster than you age, then the opposite will happen. But all else like status and income being equal, a 36 year old will be less attractive to a woman in her early 20s than a 30 year old. On the other hand, you'd be surprised how hot a woman in her early 30s starts to look when you get to your late 30s, and there are a lot of desperate women in their early 30s out there. (No doubt when I hit my late 40s I'll say the same about women in their late 30s.)
Click to expand...

This is a very prudent view.
B

Douglas Quaid said:
I'm 30 and get significantly more attention from college aged girls now than I did when I was their age. You are in an excellent position. It honestly sounds like a blessing in disguise.

The worn out women our age are a pain in the ass.
Click to expand...

I guess in a way I am. I have just been out of it for so long. I've tried a bit of online dating now and honestly it is awful. I just need to get myself into situations again where I can meet women. Since being in a relationship I've been pretty reclusive - didn't go to the bars or events anymore just spent time with my girlfriend and my family. I'll have to work on getting out of my shell again.

Does have wealth really help a guy? How do I demonstrate it - I'm wealthy but frugal - I don't drive fancy cars or wear expensive watches - I didn't get into the position I am today by spending money.
S

Orthodox
Gold Member
@BananaLlama I've had your first post on my mind the last few days and now read the second one. The question "where to meet younger women" would not occur to me in those words, for me the question is "how do I recover the mojo i seem to have lost between my early 30s and early 40s". In my case I just worked too hard on everything the world and the baby boomers want you to do, apply my university education, build up business, have a career. Basically killed my inner child, and sort of lost the game I used to have and now I have to revive it, like you by the sounds of it.

So where you ask. Probably not when you finish a night shift at a drive-through to order a burger. In Roosh's former life he would meet them just on the streets walking around. In a cafe, someone walking a dog. I can't do that kind of thing consistently, only from time to time or occasionally. You need some kind of warm start probably if you are asking that question you are probably not talking to women on street corners, not yet anyway.

Would recommend travel - it is Summer now, there is a benefit to being in a place where everyone is more open to it and not thinking about responsibilities. Stay in a hostel while you are still young enough. Otherwise if you are not going anywhere, clubs of what your interest might be. Cycling, hiking, scuba diving.. film, cooking, painting. You have to have a generative, proactive kind of life to be attractive and when you are knowledgeable or skilled, or leading in one of those groups, which has happened to me a few times, it gets easier with the girls there.

I also found my life diminished after spending time with just girlfriend and her family, it's a bit of a trap but most of us fall into it to some extent.

With the wealth, you can use it to go to places where just by being there you will be viewed differently, but if you are too frugal to do that then at least dress well and be well groomed.
W

Congrats to you both.
T

Congrats! I am mid 30s dating 21 for the past 6 months. As someone else in a similar situation, any general tips or advice you have for navigating the age difference?

This thread gives me hope.

I'm probably not going to be financially ready for something soldi for the next five years, but I'll keep striving to be the best I can be.
And keep wearing sunscreen, I thankfully don't look 35.
W

TheBadGuy said:
Congrats! I am mid 30s dating 21 for the past 6 months. As someone else in a similar situation, any general tips or advice you have for navigating the age difference?
Click to expand...

Families may have a bit of an initial shock. But no loving family member is going to say "absolutely not! I do not support this relationship between two consenting adults because they have a 15 year age difference!".

In terms of how to deal with the aging and various energy levels I guess I will find out and keep yall posted. I am very lucky in that my fiance is more introverted and family oriented. She is normally in bed asleep by 9:30pm, wakes up around 6:00am, doesn't party, doesn't go out with a bunch of friends. She really just wants to spend time at home with family (me, pets, and future kids).

On my observation in Asia and Africa (and some "less developed" parts of Latin America and the Caribbean) age is not necessarily seen as a big issue. (compared to what is seen as accepted in Europe and North America).
I am planning to use that to my advantage in Africa while I still can.
T

InquiringMind said:
On my observation in Asia and Africa (and some "less developed" parts of Latin America and the Caribbean) age is not necessarily seen as a big issue. (compared to what is seen as accepted in Europe and North America).
I am planning to use that to my advantage in Africa while I still can.
Click to expand...

This is probably true. I think the reason in the west that it is "not acceptable" is because older women dislike it so much that they stigmatize it. If men their age going after younger women, it leaves them alone and lonely, so they try to force men to "step up" and date them instead by castigating them if they go for younger women.

It is the classic thinking where if men dislike something about their life, they will attempt to better themselves and improve their life. Whereas if women dislike something about their life, they will try to change everyone else and society to conform to their current circumstance (fat acceptance is one glaring example). There are exceptions to both men and women in this, but I find it to generally be true. 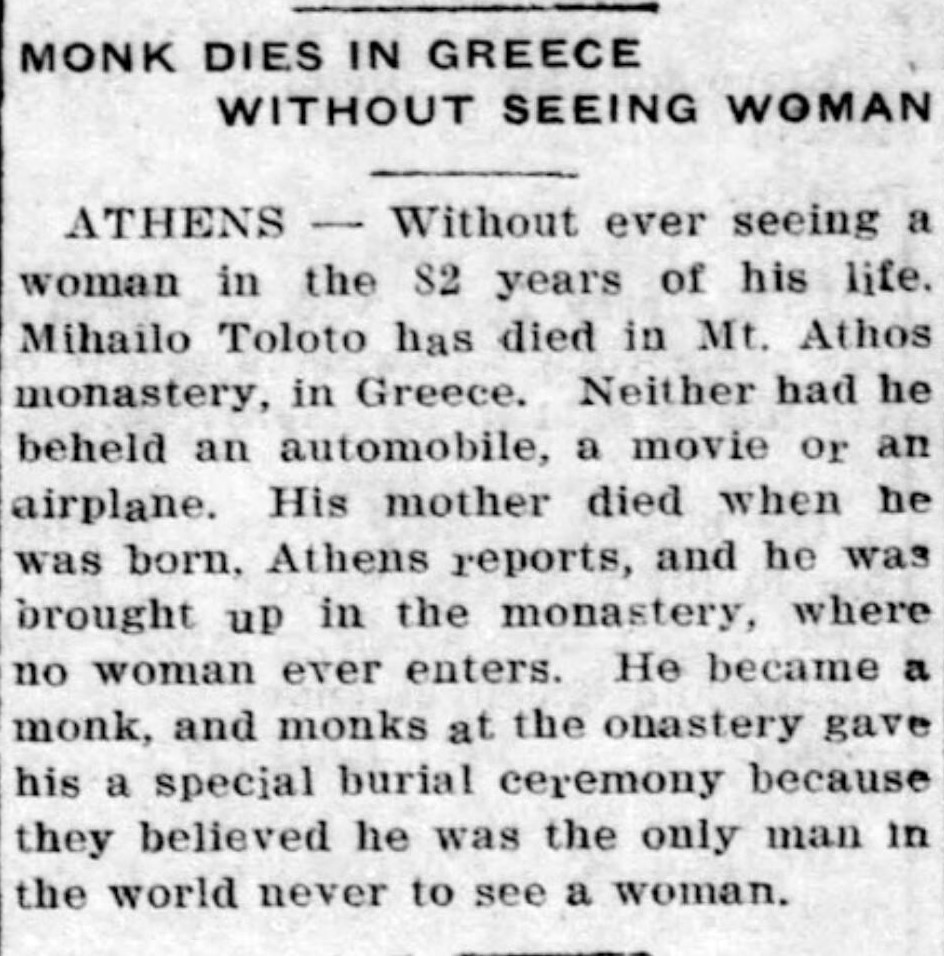 im 35. a few years ago when i worked out a lot people said i looked like 16-19 when i was 25-28. now i am older i care less about working out like crazy. now im more into playing around with my daughter rather than hitting the gym
T

It's become much easier getting & maintaining attention from younger women as I've gotten older (I'm in my mid 30s). The flip side is, younger women don't really appeal much to me beyond their youthful appearance. The same is true for night clubs etc. The single bachelor life is what eventually gets old.
P

TheRoyalFlush said:
It's become much easier getting & maintaining attention from younger women as I've gotten older (I'm in my mid 30s). The flip side is, younger women don't really appeal much to me beyond their youthful appearance. The same is true for night clubs etc. The single bachelor life is what eventually gets old.
Click to expand...

I’ve had a similar experience. I’m in my late 30s and I get more sly little stares and flirty body language from even high school aged girls than I did back in my youth. My fitness has not improved in 10 years, and my hair is now salt and pepper. I try not to dress like a lame dad. Maybe young women have just gotten extremely degenerate, or maybe I’m just seeing what I want to see, but I definitely notice it. Now granted, I was very beta and depressed in my 20s so maybe my comparison is off.

Gold Member
You’re 31 and worried about being too old?
:gtfo:

Orthodox
I've noticed a lot of people I've done professional training with look a LOT older (I think most people fall into this category) when I have seen them for the first time in a few years, recently. Is it a covid thing or is it just a general rule that most are on the stress hamster wheel of american achievement/materialism? I guess part of it could be family stuff or raising kids, but not all of these people have kids, either.
Share:
Twitter Email Share Link
Top