The UK desperately needs its own groyper wing.

Gold Member
Get on Telegram pal and get in touch with me. There's several groups that are basically our own wing.

Cheers, but I am actually just a guy in Eastern Europe that wishes that Britain somehow rediscovers its sanity. I wish you good luck and I hope there will be a push-back against the fake conservatives in the near future.

Is anyone able to attend the AFPAC that Nick is organizing?

Dismal Operator said:
I watched Nick's show last night after hearing about his banning and he was definitely upbeat about it despite understanding he was taking a hit. I was most encouraged by the fact he is doing a more formal sort of America First event which is taking place in DC during CPAC weekend, headlined by himself and Michelle Malkin. Also it looks like he helped to set up a TPUSA-like student group called America First Students. Its first chapter at Kansas St is already getting hit pieces written about it. Additionally he mentioned that he's doing a college tour some time this year. All that is to say that there are good signs here in that they are starting to build some real world infrastructure, which is going to be vital if this thing is going to have lasting power.
Click to expand...

I really want to know where I can actually donate to a fund to preserve the young minds of truly conservative Americans that are taking a stance against (((degeneracy/communism)))...I see places like his youtube/dlive to donate, but I wanna help the movement as a whole grow.

Nick seems to be a big frontrunner here, but if a PAC has an opportunity, I'll sure as shootin throw a few shekels in the bucket for them.

Is there anyone here going to AFPAC on Friday?

Anyone who has followed Mitt Romney's political career at all shouldn't feel the least bit betrayed, nor should they have expected anything useful from him. He's always been a liberal Republican and an establishment toady.

But gatekeepers like Kirk have to offer this kind of worthless faux outrage to channel discontent into safe waters where nothing will get accomplished.

Gold Member
The more you step back the more these people look like and idiotic gaggle of geese honking angrily at each other while jostling for a better place at the feed trough.

God is the only voice of relevance.

It would be worth going to CuckPAC just to hold up a sign saying "Charlie Kirk. God condemns homosexuality. Repent."

Going forward nothing is more effective at exposing the snakes in the conservative movement than spamming God's word and forcing them publicly to denounce Christian traditionalism.

Leonard D Neubache said:
It would be worth going to CuckPAC just to hold up a sign saying "Charlie Kirk. God condemns homosexuality. Repent."

Going forward nothing is more effective at exposing the snakes in the conservative movement than spamming God's word and forcing them publicly to denounce Christian traditionalism.
Click to expand...

This might seem as a connotation, but consider it more a thought I had.

I read that and I was thinking that I'd amend it to say "homosexual acts". That small bit is important I think because it controls their reaction and when they denounce it the response comes across as "god loves buttsex" rather than "god loves homosexuals".

This is when Owen Shroyer got kicked out and removed from CPAC.

Gold Member
These "rebels" have to come to Christ in a big way.

A conservative facing off with a tranny and having to reduce his stance to "I'm not comfortable with this much progressiveness" is utterly weak.

Once you accept that conservatism is dead because the West has become a satanic theocracy then accepting Christ and projecting His light is the greatest act of rebellion of all. 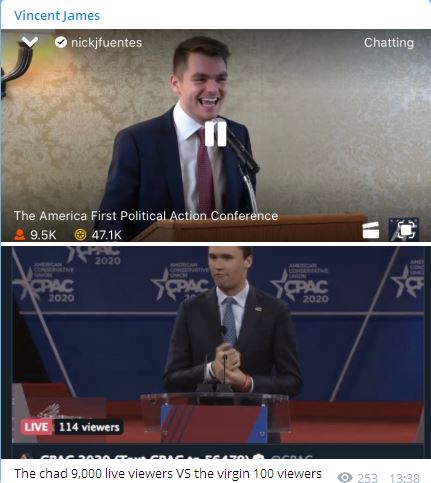 that gave me a belly laugh chuckle